This morning will certainly become one of the most important days for the forex and CFDs trading industry for 2016. The UK Financial Conduct Authority has presented a mini black swan event for that part of the industry that is regulated by the watchdog.

The news that the regulatory agency is preparing to put a cap on leverage for retail traders in the UK has startled brokers and investors in broking companies that are catering to retail traders. Brokers that have significant exposure to the UK market, including CMC Markets, IG Group, Plus500 and GAIN Capital (via City Index), have lost a combined market cap of over $2 billion. 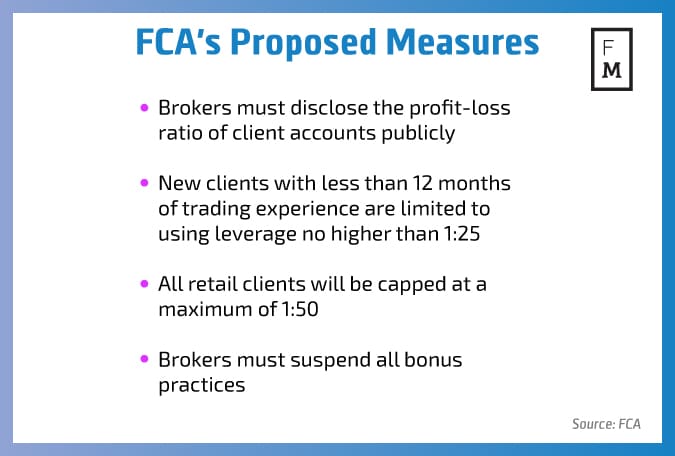 Being the largest by capitalization, IG Group has suffered the most, losing £1.1 billion of its stock value. Following closely was CMC Markets with £200 million, Plus500 with £163 million and GAIN Capital with $30 million.

How Big is the Long Term Industry Impact

In contrast to the majority of black swan events we have observed in the industry throughout 2015 and 2016, this time around the financial markets didn’t have anything to do with the shock. The FCA states that it has committed to protecting clients from themselves basically and has decided to propose a leverage cap of 1:50 for experienced traders (with over 12 months of trading experience) and 1:25 for novice traders (with less than 12 months of experience).

The size of the UK retail trading industry is justifying such an intervention – according to the FCA providers of rolling forex and CFDs have held close to £3.5 billion of client money funds. With 82 percent of the retail traders losing money over their lifespan as traders, the news really shouldn’t come as a surprise to the industry.

The suitability of retail investors to use high leverage has long been a debate amongst brokers that have been advocating a more conservative approach vs the wild west honchos that are making the markets with high leverage and are pocketing what their clients lose.

While brokers that are sending their clients’ order to the market have been advocating a more restrictive approach, many market makers have been aggressively capitalizing on the lack of trading experience of their clients.

The obvious conflict of interest was going to mandate regulatory action sooner or later. Judging from the reaction of the stock market, most industry aficionados expected the regulators to intervene later.

Japan and the US Already Have Higher Leverage

In the aftermath of the global financial crisis in 2008 a set of regulatory reforms across the globe has mandated substantial changes to the industry. The main outcome for retail traders was felt the most in Japan and in the United States.

While the U.S. market has suffered greatly, brokers in Japan to this date are posting the highest trading volumes numbers. The main issues for the US market that has basically been destroyed by the enactment of the Dodd-Frank Act in the aftermath of the financial crisis of 2008 is related to the substantial capital requirements for retail forex brokers.

The biggest players in the market survived, but competition has suffered greatly and US traders are getting trading conditions that are worse than their European peers. The changes to the legislative framework in Japan and in the US have had substantial impacts on brokers, but if we look at Japan, where the maximum leverage is capped at 1:25, the trading volumes have been consistently rebounding throughout the years in line with the volatility of the Japanese yen.

While the regulated brokerages in the European Union are likely to face unified trading conditions or minor differences between countries, the brokers that are regulated offshore could well thrive under the new regulatory regime.

Being regulated offshore waives a number of client protections and some clients will be keen to seek higher leverage and will open trading accounts outside of the UK and the EU. Sacrificing their client fund security and the deposit insurance schemes that a number of regulators are mandating will be their own doing.

A number of companies that are not regulated or are regulated outside of Europe will most likely look for loopholes in the prospective advertisement bans in France, Belgium and the Netherlands. Regulators are still unclear as to how to enact such policy measures as the advertisement ban. They will need to make sure that the legal industry has enough incentives to continue operating and will prevent offshore companies from on-boarding European and UK clients.

This difficult task should be one of the main points that companies raise with the FCA during the consultation period that is set to expire on the 7th of March. The UK regulator is giving forex and CFDs brokers 3 months to send feedback on the proposed changes to the regulatory framework.

If the companies don’t show the FCA that some aspects of the limitations that it has announced today can backfire, the industry could be affected more than we already expect.

very true. Shortly after my expose articles here, I will submit some comments about the leverage hard caps.

Not sure why they went this route when CySec did only a soft cap.

The cap on the leverage is really bad idea especially for FX traders!
I also do not like the idea to further limit the leverage for traders without experience. No one has the right to limit the opportunities for people. Everyone has a head on their shoulders. People can decide for themselves.

The best solution will be to set the default leverage to 50:1. Then give the clients the option to access 100:1 or higher after they sign some risk disclosure statement . Basically what was proposed by CySec .