The figures show a strong financial performance year-over-year with core revenues growing 11% to $101.5 million, EBITDA (at constant currency) increased by 14% to $35.3 million and cash balances at year end remained stable at $115.4 million. The excess free cash flow is offloaded to shareholders via the dividends which grew by 46% to 16.47 $c. 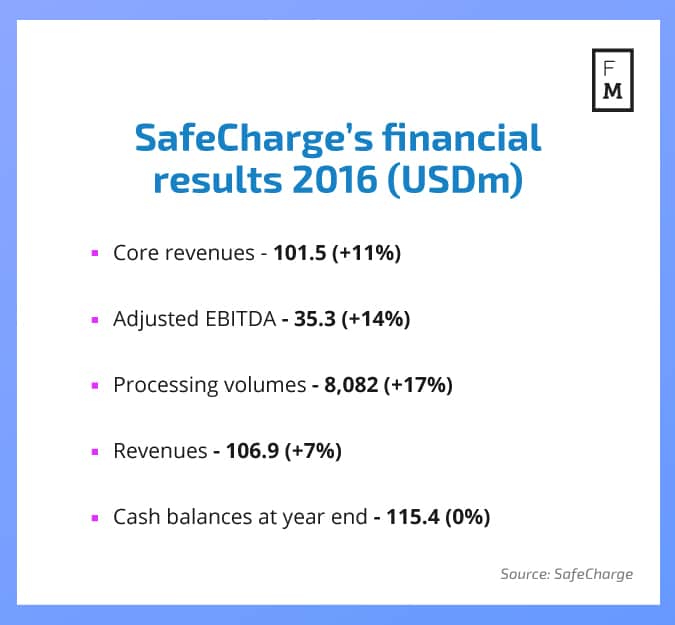 David Avgi, CEO of SafeCharge, said: “I am pleased to report a good set of results. It has been another year of strong performance in the core business and the Company has made positive steps with the implementation of its organic growth strategy. We continue to invest in our payment and risk platform to support future growth and are delighted that our customers recognise the benefits that SafeCharge’s payments solutions bring to them.”

SafeCharge also reports that it has made a good start to 2017. It reveals that transaction volumes continue to grow in its core payment processing and acquiring platform and it has a strong sales pipeline.

The company’s board of directors say they look forward with confidence to 2017 and beyond. They expect revenues to be in the range of $115 – $118 million, and adjusted EBITDA to be $36 – $38 million. According to them, this will be driven by continued growth from the existing client base and over $1 billion in annualised processing volumes from new clients due to start processing in 2017.

Avgi concluded: “The Group is confident that its focus on delivering high quality revenue combined with a substantial pipeline of new business will yield further revenue growth in 2017 and build stronger profitable momentum in 2018.”