Apple is scheduled to report their Q4 financials for the July through September period after the close of US trading later today (Apple’s fiscal year ends in September). The reporting period includes just a few weeks of sales since the newest iPhones, the 6S and 6S Plus, were released. As such, holiday sales for the current Q1 period are expected to provide more clarity on just how well the new iPhone is performing as it faces stiffer competition from Samsung’s Galaxy line and others this year.

Nonetheless, after iPhone sales on their first weekend achieved a record for Apple, Q4’s financials are being viewed by investors as a harbinger of how well the company will perform in Q1. As can be seen in the chart below, shares of Apple have had a tough time since the Q3 report, but have recently jumped higher ahead of today’s announcement. 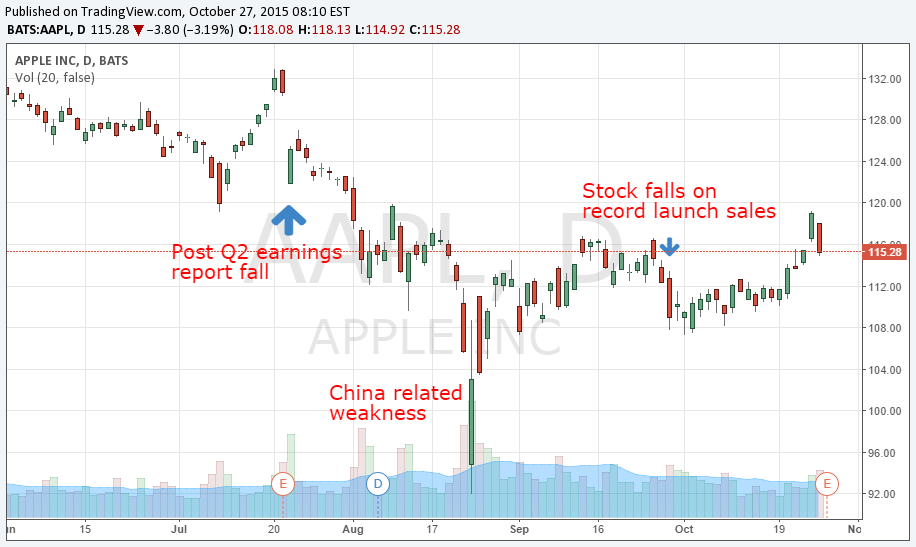 As we near the announcement, Wall Street analysts are expecting Apple to report earnings per share of $1.88 with $50.8 billion in revenues. To provide an alternative as to what to expect, we take a look at what several fintech startups of investing tools are revealing as we near today’s Apple earnings release.

Sentiment data from Acuity Trading is revealing that investors are becoming negative on Apple stock. Online sentiment of investors as tracked by data from social and news sources shows that sentiment had risen prior to the run up of Apple’s shares the last few days. However, it has since turned sharply lower.

According to Andrew Lane, Founder and CEO of Acuity Trading, the sentiment shift could be the result of traders believing the current run up higher is down, or an overall negative opinion to today’s earnings announcement.

Beyond the day to day sentiment analysis, Acuity’s radial product is showing that sentiment is thoroughly bearish for reading in the past hour.

Interestingly, the online sentiment data represents a shift in opinion of retail traders regarding Apple’s stock. Data compiled by StockTwits reveals that readings from their community are at 77% bullish. The data is based on a rolling 7 day period. As such, current sentiment may be lower. But, the overall trend has been higher, revealing growing positive opinion towards Apple’s stock since the last September release of the iPhone 6s.

Beyond StockTwits, other online investing sources are also showing bullish opinions of Apple shares as we near their earnings release. At Investing.com, members are currently 64% bullish.

Crowdsourcing estimates from investors and professional analysts, Estimize forecasts for Apple’s Q4 results are EPS of $1.92 and $51.358 billion of revenues. The estimates are slightly above Wall Street’s $1.85 predictions.

Over the last two years, crowdsourced estimates from Estimize for Apple have been consistently closer to actual figures compared to that of Wall Street. Worth noting is that prior to the showcasing of the new iPhones in the beginning of September, Wall Street and Estimize forecasts had been closely aligned. However, they have begun to differ since September with the Estimize community becoming more bullish on Apple’s prospects. The shift could be the result of the much more widely distributed Estimize community viewing positive reactions to the new iPhones around the entire US.

While at first glance Q3 and Q4 shouldn’t be very well correlated due to new products typically being announced in Q4, historical trading has shown they have similarities. Using the Absolute Retrun chart that is available from Sentieo, it shows that Q4 trading often follows that of Q3. Since 2002, Apple shares have had only one year (2012) where Q3 and Q4 trading didn’t result in both quarters showing either a profit or loss in stock prices.

Using that metric, Q4 is set for coming weakness, as the Q3 period ending with Apple shares falling 12.34%, and they have since rallied 4.78% in October.

Share this article
Tags: Apple / stocks
Got a news tip? Let Us Know