Despite the doom and gloom narrative surrounding UK business and the headwinds wrought on operations via the Brexit uncertainty, the fintech space continues to be a boon for the country, with new outfits opening each day in London. As such, fintech veteran and payments entrepreneur James Azar has recently launched BHNV, a London-based fintech company.

BHNV Capital is a venture seed investment fund for both fintech and peer-to-peer (P2P) businesses and technologies. The group is based out of Greater London and follows on the heels of Azar’s past roles in the fintech space. In his new role, he is the group’s founder and will serve as its CEO, beginning with with immediate effect. 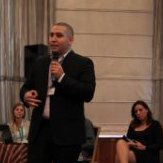 Prior to founding BHNV Capital, Mr. Azar was active in the financial services realm, having held integral senior level roles at Karinza for almost six years. Karinza is a sales solution provider for the foreign exchange and binary options market. In this capacity, Mr. Azar effectively co-founded Karinza, also serving as its director from the group’s inception in 2010, according to information made public on his Linkedin profile.

Share this article
Tags: fintech / P2P
Got a news tip? Let Us Know