“Being ignorant is not so much a shame, as being unwilling to learn.”

An Important Warning About Distractions. Beating an addiction to the internet can be harder than breaking an addiction to sugar. For some people. I am becoming a little bit obsessed with the techniques, strategies, routines, and tricks for living a more fulfilling life. And I’ve realized that I’m addicted to a lot of things … that you wouldn’t ordinarily call addictions. And addictions lead to regret. And I hate regret.

An Important Warning About Minimizing Regret. In this video, Jeff Bezos talks about taking a risk. Doing something crazy and not looking back. As a trader, I have this to say: If you focus on minimizing regret, you will get into a routine, you will reduce your position size, take fewer trades, and play the long game. And that’s how you win. You don’t win by having the smartest brain, or best education, or a bunch of fancy stuff.

An Important Message About Fancy Stuff. Guess what? A Lamborghini won’t make you a better trader. And setting a goal to get one won’t, either. I know I’m beating a dead horse here. I know. But I’m realizing more and more that the most successful traders and business people (even ones that show off fancy stuff) are the ones who could live with the least, who know how to start from scratch, and who are not impressed by showy trappings of wealth.

On the business front …

Janet Yellen Gave Another Boring Speech. But the message was clear: The Fed is not going to get caught waiting too long to raise rates. And they can raise once in December and keep it there until the year 3025 if they want to. Even if the NFP comes in negative, this is going to happen. Stocks fell, as traders resigned themselves to this new reality. But one stock in particular is still way up: Microsoft.

Microsoft Wants Love. And they’re doing a hell of a job at it. Almost 20 years ago, Apple was failing. They’d lost the design mojo. Well, Microsoft never had it in the first place, but is making a serious run at customer loyalty through great design. There’s evidence that it’s working. Is Microsoft a long-term buy and hold? I think yes. See the chart of the day. 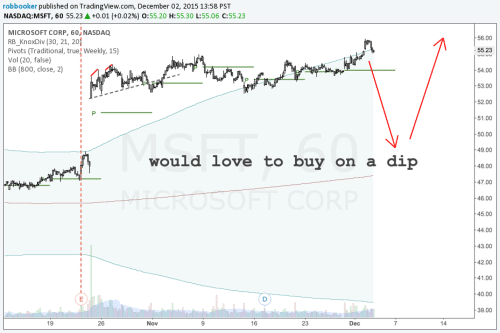 Thursday Brief: 5 Things Traders Need to Know For Today
Jeffery Patterson manages the Executives portal for Finance Magnates. He debut in the Forex industry in 2011 was at FXStreet, having previously worked in academia across number of econometric studies, and HIV research.Jeff is keeping his ears close to the ground in everything related to the executive segment of the trading industry. From executive moves to joining our select choice of Executives, feel free to reach out to Jeff and exchange ideas, which most probably will be translated into interviews...
wpDiscuz