Our calculations show that the example portfolio would have achieved a better risk-return with a coefficient of variation[4] of 1.28, compared with 1.45 for a portfolio of zero percent gold allocation. In other words, for the same average return, the portfolio would have had less risk as measured by the standard deviations.

The table below shows how the diversified portfolios with and without gold would have performed against other traditional asset classes over the same period.

Short- and medium-term holders can take advantage of the lack of correlation of gold to other assets to achieve better returns during times of turmoil. Long-term holders can manage risk through an allocation to gold, without necessarily sacrificing returns.[6]

Gold returns tend to outperform other assets during periods of economic and financial turmoil, allowing investors to reduce risk when it is most needed.[7] This allows investors to use gold as an asset to hedge risk and reduce losses under extreme market conditions, such as during periods of fiscal or monetary mismanagement, crises of various kinds, or a fundamental change in their dominant currency.[8]

Ultimately, gold can be used to manage risk more effectively and protect an investor’s capital against potential losses during negative economic conditions.[9] As can be seen in the chart below, gold consistently outperforms Real Estate and US Stocks in times of economic crisis. US Bonds had traditionally provided somewhat of a safe haven in times of crisis, however with the failing of the US financial system, this asset class became justifiably less appealing.

Chart 3: Return on alternatives during periods of turmoil, in US dollars[10] 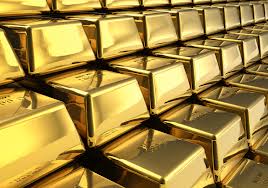 3. Gold is a high quality and liquid asset. According to the LBMA, 10.9bn ounces of gold worth approximately USD 15,200bn were traded in the first quarter of 2011.[11] This equates to a daily turnover of around USD 240bn and means a higher daily turnover than most liquid equities, German Bunds, UK Gilts, and most of the currency pairs.[12] By comparison, the daily turnover of Apple shares is about USD 5.5bn.[13]

Gold’s liquidity therefore reduces its risk as an investment, as investors can easily translate their gold investment into currency.

Additionally, the lack of credit risk associated with holding allocated gold assists investors in balancing the risks present in their fixed income and equity allocations. Allocated physical gold is one of the very few liquid investment assets that involve neither a liability nor a creditor relationship.

[4] The coefficient of variation allows an investor to determine the amount of risk (volatility) assumed in comparison to return. A lower ratio is preferred from a risk-reward perspective.

Share this article
Tags: commodities / gold
Got a news tip? Let Us Know