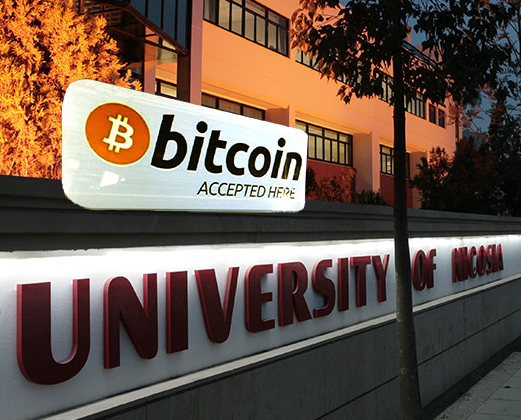 The University of Nicosia, the largest private university in Cyprus, announced today it is going to be the first university in the world to accept Bitcoins as payment for tuition and will also launch a Master’s degree in digital currency.

In addition to its own commitments to develop Bitcoin’s respectability, the University of Nicosia proposes that the Cyprus government initiate developing the island nation into an international hub for Bitcoin trading, processing and banking.

The new Master’s degree will open in the spring of 2014, with the lectures in English, and the classes are offered not just to on-campus students but over the internet as well. The university has designed the classes for financiers, businessmen, entrepreneurs and public administrators who wish to better understand the underpinnings of digital currency, how it will interact with existing monetary systems, and opportunities for innovation in digital currency systems.

Bitcoin’s woes continue as more scams are exposed every week and criminals keep targeting the digital currency, hurting the measures to help it gain legitimacy.

In Poland, an exchange called Bidextreme announced that its servers had been hacked on November 18, and its customers’ digital wallets were completely sucked dry by the online bandits.

The Polish exchange suspended all its trading activities and now anyone trying to log in to its website is greeted by a simple text page explaining the situation, mentioning that law enforcement authorities have been notified, and explains the procedures to get cash deposits back. No mention of how many client funds in digital currency were lost.

Meanwhile in America, the New Jersey Attorney General disclosed to the public on November 19, that his office had reached a $1 million settlement agreement with an online video gaming company from New York called E-Sports Entertainment, for installing Bitcoin mining software onto its clients’ computers without their knowledge or consent.

E-Sports Entertainment’s clients paid $6.95 a month for its video games anti-cheat services, in exchange they were cheated out of control of their own systems as code was written into the software allowing the company to not only use the computers for Bitcoin mining, but also to monitor user activities and capture images of their screens, even when users weren’t logged into the servers.

Share this article
Tags: bitcoin / cyprus
Got a news tip? Let Us Know

“…..were cheated out of control of their own systems as code was written into the software allowing the company to not only use the computers for Bitcoin mining, but also to monitor user activities and capture images of their screens, even when users weren’t logged into the servers.”

That was pretty slick actually, lol.

But it is somewhat ironic that cyprus would be the hub for bitcoin exchange. I suppose the people there would be much more welcoming to it considering the different “haircut” styles proposed a few months ago.

Hahaha this article makes me laugh a lot… bitcoin itself is a scam, and scammers are scamming people of scam. University of nicosia is accepting bitcoin payments hahaha… nice try to attract all those scammers who deal with bitcoin to become students of the university… deh deh deh