As the desire to mine the physically intangible currency has gone viral, a firm in Sweden named KnCMiner has claimed to have brought in $3 million in revenue in just four days from selling its bitcoin mining machines, according to an article published today by the website theregister.co.uk.

The recent bitcoin bonanza continues, as over the past week alone it saw lucrative returns for investors as new highs were made for the virtual currency, and a newly funded start-up that was just launched, during a time when other investors lost millions from an online bitcoin heist in Australia, to the closure of a Chinese bitcoin exchange that lost the funds held by thousands of clients of the newly praised electronic currency.

Riding the wave and helping to propel it, KnCMiner, based in Stockholm, Sweden, specialises in building leading edge Bitcoin ASIC Miners for a secure and distributed decentralised global Bitcoin network, according to information on their website.

Combined with the prodigious talent housed at Sweden’s illustrious ORSoC IC engineering consultancy, KnCMiner is on track to smash the world record for the time taken to develop and manufacture 28nm Application Specific Integrated Circuits, as per the company description which promises to over-deliver on their promises to build Cryptocurrency Hardware for 21st Century Finance.

The rise of Bitcoin miners who devote computing power to get paid in bitcoins when they solve cryptopuzzles is reminiscent of modern day miners who work tediously to extract precious metals and ore from the earth, and be rewarded with the commodity which they seek so tirelessly.

Similiarly, as the earth contains precious metals hidden deep within its eco-system, so does Bitcoin reward such figurative jewels if its miners are successful. Each bitcoin transaction is recorded in a single log known as a blockchain, and an individual account can only spend a Bitcoin if the blockchain records indicate that it indeed owns the Bitcoin in the account.

This log is protected by incredibly complex cryptopuzzles that require large-scale number crunching and associated computing power in order to be solved. Anytime each puzzle is solved, new transactions are recorded and the individual or group of parties involved in solving the puzzle are rewarded with a fee in the form of new Bitcoins.

Since solving these puzzles has become mind-bogglingly complex, it’s nearly impossible for one individual to do it on their own and instead, rather join a group of miners who solve the puzzles with collective shared computing resources and then split the profit if they solve the puzzle. This is similar to having a larger number of people working in a gold mine, rather then trying to dig it all out yourself, the throughput of many help achieve the shared goal.

KnCMiner was formed as a joint venture between ORSoC AB and Kennemar & Cole AB (both Swedish Companies), and aims to change the Bitcoin industry by offering high performance mining products in combination with services, that together make it extremely easy and cost-efficient to mine Bitcoins in the future. This can be achieved through high-performance hardware products with ease-of-use in mind surrounding “its operation”, making it possible for people to join in.

According to information on the firm’s corporate website, it believes there are many different kinds of people (and companies) out there who want to mine Bitcoins, and each having a different level of technical expertise, as well as different kinds of financial strength. This belief is shaping their philosophy, or at the core of it, and resulting in the view that mining has to be available for all kinds of end-users.

As per the article today, KnCMiner, which was started in April of this year, has managed $29m worth of sales, including 5,000 mining machines and has shipped its gear to 120 countries. According to information on its website, the Jupiter model, which contains the latest upgrades and speedy mining ability, sells for nearly $5,000 and is currently sold out, following the 4 day rush of orders totaling $3 million, as mentioned above.

The company also makes reference to renting Bitcoin mining machine configurations, as a means to save cost of entry and increasing initial ROI. In addition, the company describes offering services such as paying per specified hashtag rates over a fixed time duration, as well as data center hosting services for miners to host their systems.

The above mentioned article posted today went on to quote Andreas Kennemar, CEO of KnCMiner, as having said, “While we have seen a significant increase in demand for our line of machines from the last quarter to this one, what happened in the last four days has been unprecedented for us, maybe unprecedented anywhere in the Bitcoin mining industry.”

Mr. Kennemar added in his above mentioned quote,”In four short days, we pushed $3m of equipment out the door. The increased activity around Bitcoin in just half a week undoubtedly had a sizable impact on our sales. We’re now focusing on doing everything we can to meet the demand we expect we will continue to receive, especially as Bitcoin’s popularity continues to soar.”

Despite mixed consensus, where on the one hand, there is widespread praise for the esteemed new age digital currency with hopes of a bright future, on the other hand, opponents of the feasibility of such an innovative endeavor share concern with critics who have foretold a more bleakish demise concerning Bitcoin’s risks, including reports from university researchers and professors highlighting systemic vulnerabilities that could crash the Bitcoin network from a colluded attack.

While any such attacks could results in substantial losses, it could result in subsequent measures to make the system safer. Just as substantial cases of fraud or manipulations in financial markets may results in tweaks to regulations and market infrastructure to deter future threats. Of course, the preferred method would be to learn from preventive analysis and research and not from the aftermath of events.

The extremely delicate caution required to hold Bitcoins both safely, and enter the correct related keystrokes of accurate data when carrying out Bitcoin transactions (which are irreversible) alone, make it simultaneously appealing and something to be feared.

Some effort is required to protect customer privacy with Bitcoin, as all Bitcoin transactions are stored publicly and permanently on the network, and this means that anyone can see the balance and transactions of any Bitcoin address.

However, the identity of the user behind an address remains unknown until information is revealed during a purchase or in other circumstances. According to Bitcoin.org, this is one reason why Bitcoin addresses should only be used once, as it’s the users responsibility to adopt good practices in order to protect privacy. More information about Bitcoin privacy and security can be found on bitcoin.org

As miners of the digital currency are finding the challenge of continually solving the ever-evolving cryptopuzzles increasingly harder, and requiring faster and more efficient hardware and software solutions, it’s only natural that the demand for such technologies will be higher and the supply more scarce.

Cryptography aside, this challenge of exponentially increasing scale draws parallels to that of racing against the clock in financial market data assimilation and nano-second actionable trading models.

It will be interesting to see what will be next as miners and algo-traders continue to need larger supercomputers that are both faster and more scalable, in order to parallel process the increasingly complex speed of data and depth of problem solving that lies in the future of financial market efficiency.

For now, Bitcoin, or as it’s known on Twitter under the cashtag ‘$BTC’, continues to draw the attention of the world including financial brokerages,  investors, traders and anyone looking to use the crypto-currency.

A fresh new record high today for the price of Bitcoin as it reached $447.49 according to a chart from MtGox: 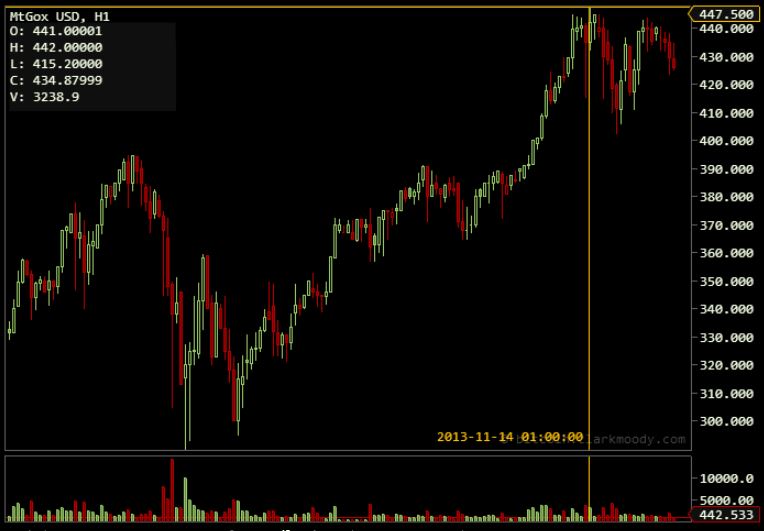 The great news about this Bitcoin crase is that it is not a fad. It is indeed capable of being a global complimentary currency as defined by Bernard Lietaer: “….Promoting a healthier monetary system requires the use of three different kinds of currencies alongside our national currencies: (1) an inflation-proof global complementary currency designed to stabilize the world economy; (2) business-to-business currencies designed to counteract the effects of conventional money shortages during periods of economic crises and contraction; and (3) community currencies that address a variety of social problems and strengthen the fabric of society….” Bitcoin can be used as… Read more »

The great news about this Bitcoin crase is that it is not a fad. It is indeed capable of being a global complimentary currency as defined by Bernard Lietaer: “….Promoting a healthier monetary system requires the use of three different kinds of currencies alongside our national currencies: (1) an inflation-proof global complementary currency designed to stabilize the world economy; (2) business-to-business currencies designed to counteract the effects of conventional money shortages during periods of economic crises and contraction; and (3) community currencies that address a variety of social problems and strengthen the fabric of society….” Bitcoin can be used as… Read more »