Litecoin (LTC) has once again set fresh lows for 2014, currently trading at $9.15 on BTC-e. Aside from an unstable period of flash selling on April 11, this its lowest level since its major rise last fall.

It has shed nearly 6% in the past 24 hours, falling below its previous low of $9.44 set 10 days ago. At the time, we assessed that LTC/BTC was either bottoming out or poised to fall below 0.016. 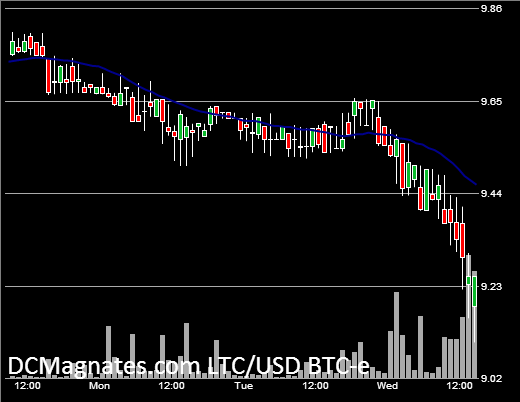 During the aforementioned slide, LTC/BTC’s weakness was blamed squarely on LTC itself. It essentially failed to keep up with BTC during its rise to to above $650. Today, however, the entire crypto market is struggling. Bitcoin has lost close to 4% on BTC-e and has dragged down Litecoin and most other alts. Thus, LTC/BTC remains relatively stable around 0.0163.

BTC-e is the primary destination for LTC/USD trading, and its chat forum has some of the most active discussions on the topic. Some traders are writing the obituary for Litecoin, while others have declared a recovery to $25-35 by summer’s end. There is also a growing contingent blaming today’s crypto selloff on the upcoming auction of Silk Road bitcoins, alleging the market is being manipulated to get bidders a better rate.

Aside from forces exerted by Bitcoin, the continued drop may just be a result of simply having little or no reason to rise. The crypto world has grown weary of the multitudes of altcoins in existence. Granted that Litecoin was first on the block, but it now exhibits little or nothing unique to distinguish itself from the rest. Some alts have come out with their own innovations or even came into being completely independent of Bitcoin, which cannot be said for Litecoin. Coins like Darkcoin and Nxt have excelled of late, while Litecoin clones like Dogecoin have declined.