After falling by as much as 33% prior to and during Bitcoin’s (BTC) recent rally, Litecoin (LTC) has caught a much-needed respite.

LTC/BTC is currently trading at 0.017. It has been hovering near this level for roughly two weeks. Much of its downward pressure had arisen from BTC/USD’s rise, which began to top out two weeks ago. 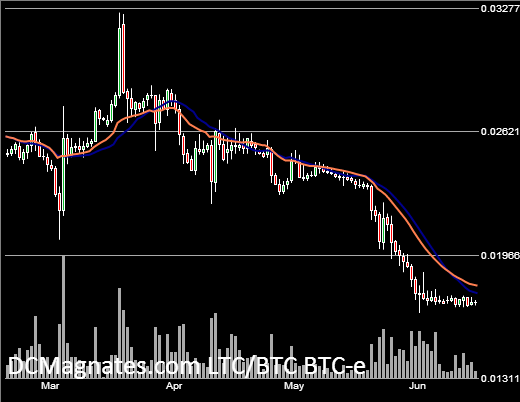 Versus USD, however, LTC has joined Bitcoin’s sharp decline this weekend. It is now trading at $9.52 and falling. Earlier it hit $9.44, its lowest level since momentarily touching an intraday low of $7.90 during heavy selling in early-April. Excluding this instance, it has actually just cracked its other recent low of $9.60 set later in April. This would mark its lowest level since the great rally last fall.

Litecoin is thus getting the raw end of both deals, falling with Bitcoin but not rising with it. During Bitcoin’s rally, it either stagnated or declined. It was during this 2-week rally that LTC/BTC declined from 0.025 BTC to 0.017 BTC.

When it came to BTC’s retreat, LTC returned to its old ways, tracking BTC’s movements versus USD. The silver lining for LTC is that its latest decline has kept roughly in line with that of BTC, without amplifying it as traditionally done in the past. This has resulted in LTC flatlining about the 0.017 BTC level.

In flatlining, LTC/BTC is actually buying time as its 20-day moving average plays catch-up to converge at the bottom. Their convergence will mark a key juncture at this critical time for LTC trading. LTC/BTC has struggled to stay above this average for any meaningful during the past 2 months.

The best litmus test for LTC’s next turn will be the BTC price itself. If BTC/USD were to recover and LTC/USD to remain flat or lag in its recovery, LTC/BTC by extension resumes its decline and will likely set new lows below 0.016 BTC.