Bitcoin enjoys yet another boost today, continuing its relentless rally toward recovery. It set another high earlier today, challenging $670 on BTC-e, its highest level in 3 months.

Unfortunately for altcoins, they’ve been left behind. And the beloved Dogecoin is no exception. What’s worse for the Shibe tribe is that Dogecoin has actually underperformed, particularly during the past month. During that period, alts at least took a cue from Bitcoin and made a few modest gains relative to USD. Dogecoin, however, has spent most days torturously lying flat or gradually leaking value.

Dogecoin is now trading at 61 satoshi, 79% off its peak near 300 satoshi reached in February. In dollars, one DOGE has slipped to under $0.0004. Its market cap stands at $32 million, 57% off its earlier peak. It now ranks 7th, 5th among mineable digital currencies. 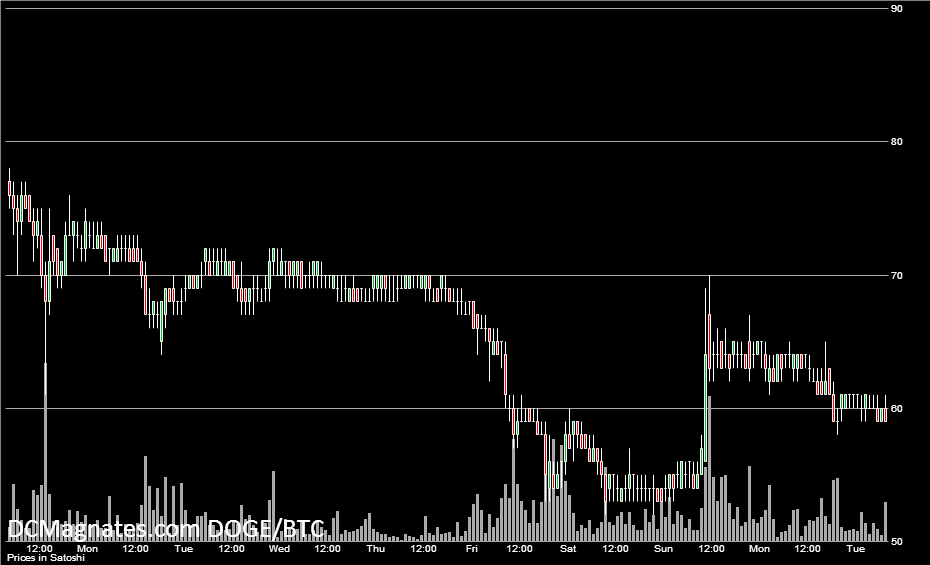 A guest to the DC Magnates chat lamented, “can’t dogecoin get a break too?!”

Even the continued crowfunding activity, such as the recent NASCAR sponsorship, has not been enough to get the coin out of the dogehouse.

Last month, it even made its way into Citi’s Disruptive Innovations report.

It seems as though Darkcoin (and to a lesser extent, Blackcoin) has become the new darling of the alt-world, at least for now. Darkcoin has been exhibiting some very Doge-like behaviors- those we saw during the great rallies in January and February- for the past month.

The reality is that time is the best test for any asset. Any fad can get really hot, really quickly. We saw this with Auroracoin and its ilk. But the “science” behind its trading simply renders long-term outperformance prohibitively improbable. Bitcoin seems to be withstanding that test, at least for now.

In Dogecoin’s case, we must really delve to understand the underlying value proposition offered over and above, say, a Litecoin. While attributes like crowdfunding, family-friendliness, a vibrant community and a catchy theme are nice, the value offered can be as transient as the hype driven by these attributes.

Underlying value can perhaps be found in its ideal use for tipping, or finding an ideal recipe for a coin’s specs, as alluded to during the altcoin discussion at San Francisco’s Coinsummit. But these attributes need more time to prove themselves, as they would with any coin.

Share this article
Tags: citi / trading
Got a news tip? Let Us Know