Whether you are among those who think that Ethereum is the next internet or those that think it’s just being pumped by corporations trying to take down bitcoin, one can not deny the incredibly rapid rise of its value. Ether’s overall market capitalization climbed above $600 million for the first time in the last twenty-four hours before the price stabilized a bit around $580 million as of the time of this writing.

Putting things into perspective, only last week Ether’s market cap reached around $447 million – more than Ripple and Litecoin combined for the first time with a price of $5.8. And the ETH/USD exchange rate grew more than 33% over the past seven days, including 16% in the last twenty-four hours, bringing the price of Ether to $7.5 right now. Behind the rise are exceptionally large trading volumes also – about $25.7 million in the last twenty-four hours.

On social media bullish ETH traders mainly point to two examples from recent days of how Ethereum is being accepted into the mainstream business world as the reasons for the last price hike. Media giant Thomson Reuters published a wanted ad for a blockchain expert software engineer specifically mentioning designing for Ethereum.

Meanwhile Microsoft Azure’s ‘Blockchain as a Service’ has welcomed its first certified offering from Blockapps: STRATO. The offering is a “single-node blockchain instance”, which acts as a developer sandbox for testing Ethereum applications and offers an API for connecting applications to private, semi-private and public Ethereum blockchains. 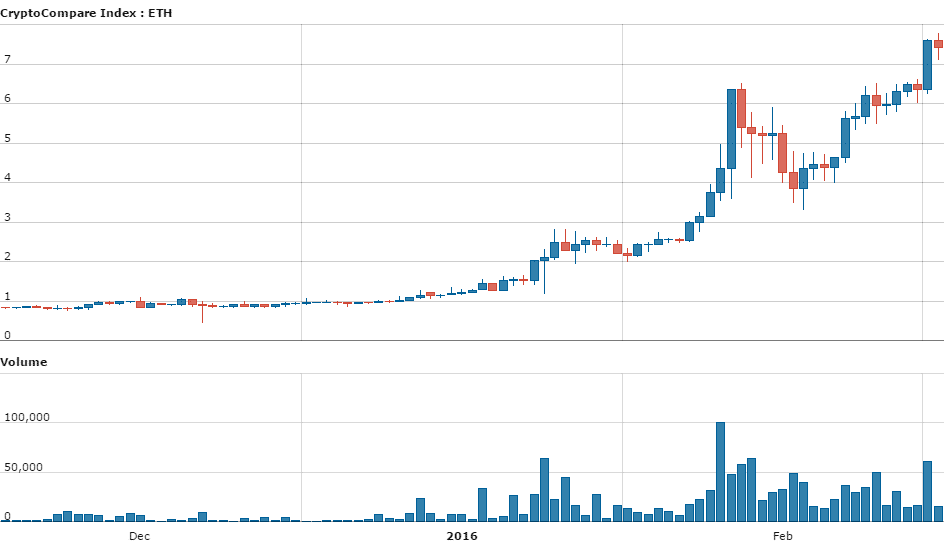 Try and figure out how to buy Etrher, its a friggen nightmare. No way can it become successful, you cant even purchase it without going insane in the process.

It is as simple as buying BTC

You can purchase Ethereum on Bittrex.com. You can look for some videos on youtube how to buy if you haven’t done this before. Hope that helps.

It is very easy, I bought ether (Ethereum) within minutes through Kraken

If you mean pay cash for it then you just need to buy BTC first then go to an exchange to stock up on ether. Or just mine it.

Best route in is to buy BTC and then use shapeshift.io to transfer into ETH.

Very easy if you’re at all familiar with BTC.

I easily bought ethereum… Its not hard at all

This previous guy must be an idiot. ETC is about the easiest thing to purchase in the world. Hey idiot, sit back and watch why we all get rich.,