Well, the first week of June has come to a close, and what started off as something potentially promising, due to what occurred from mid to late May, turned into a pretty dry week all round. I was cautiously hoping there would be a break, but the resistance we’ve spoken about previously has really held its ground.

During midweek, I posted the following Weekly chart: 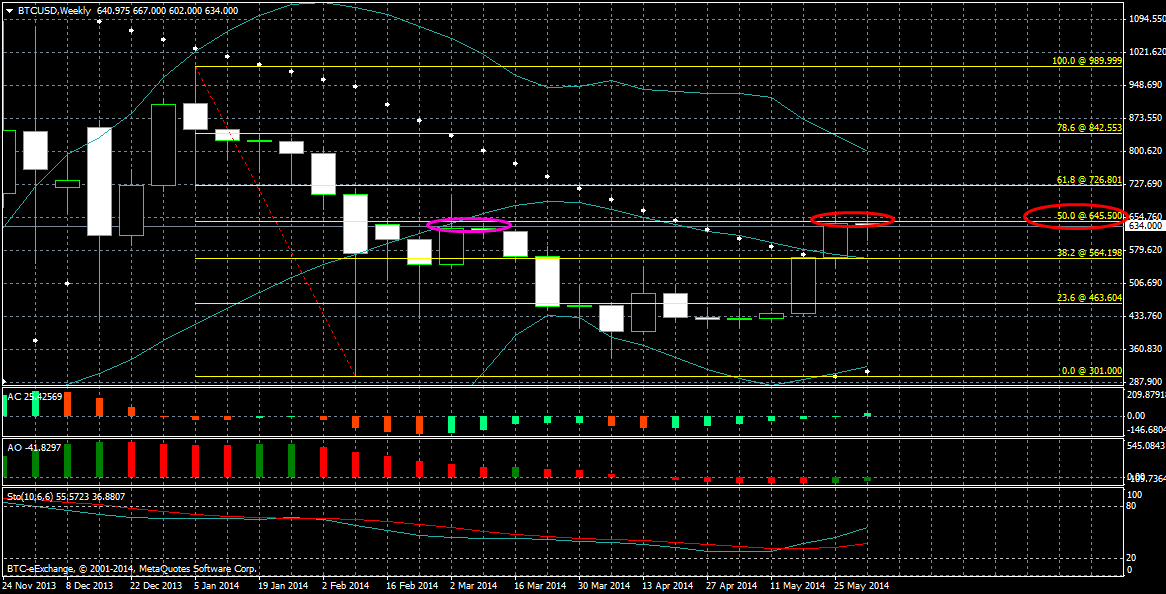 Where I applied the Fibonacci study to the high and low of this year, which as we know are two strong psychological round numbers, i.e. from the swing high of 1000 during the first week of 2014, until the low at 300, during early February. I mentioned, “I still feel 50% could break by the weekend, there’s still so many bullish technicals at work… My main concern is that 50% has been tested before, back in March (circled in purple on the current Weekly chart above); price hasn’t been above that level since, so the stalling could continue for some time yet.” Well, surprise, surprise, the stalling has indeed continued, with price simply unable and unwilling to push above the 50% retracement level, marked in red.

There’s no need for me to even bother uploading the current Weekly chart as it stands, the above chart from midweek suffices, since virtually nothing has changed on the Weekly. Will 50% be broken this coming week or will it stay firm? It seems each time I perform a Bitcoin analysis, I’m asking myself the same question over and over again. At this point in time, I’m staying neutral.

However, there are some interesting observations to be made if we zoom into the Daily timeframe; we can see how a lot of the indicators are giving us a bearish outlook, such as the Stochastics beginning to head down from an overbought position, along with both the Accelerator and Awesome Oscillators turning red for a few days now (click to expand): 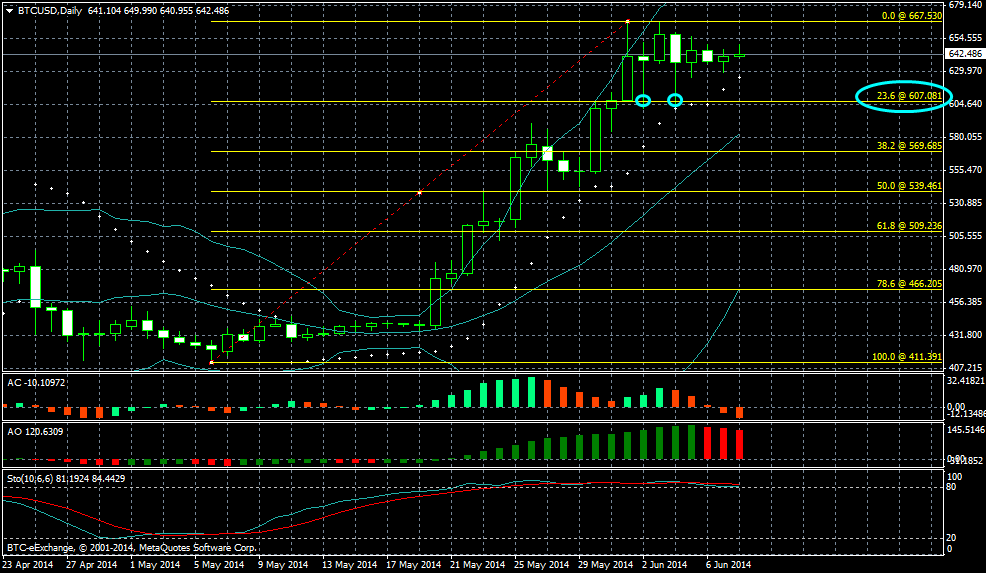 For this D1 chart I’ve performed a shorter term Fibonacci study from the low at 410 till the current high, and look how price has actually tested the 23.6% Fibonacci retracement level twice last week at just above 600. Since the last test of course, we’ve just seen the candlesticks get smaller and smaller, and if one was to zoom in even further to the intraday timeframes such as M30 and H1, one would realise a Bollinger Squeeze taking place. As already mentioned above, the AC and AO are red on the Daily, so we could see another test of 600, which in conjunction to being the first major Fib level (23.6%), is also a psychological round number. It’s clear for everyone to see the conflicts being presented here across the various timeframes, ultimately boil down to one thing, consolidation, which I expect shall continue at the start of this week.