On Friday, when the price of Bitcoin neared $3000, we advised caution as one can never be truly certain of how things will turn out with this wild ride. Today traders are seeing the truth of this, as the price is now below $2550 after falling over 9%.

The reason for these repeated ups and downs is the ferocious debate in the Bitcoin community about implementing a blockchain feature called Segregated Witness (SegWit) which is meant to add to the transaction capacity of the system.

If a consensus is not reached, the Bitcoin blockchain might fork into two competing splinter cryptocurrencies. This obviously is not good for investor confidence as it forces bitcoin exchanges to pick sides or to stop trading until the dust settles as well as confuses end users. 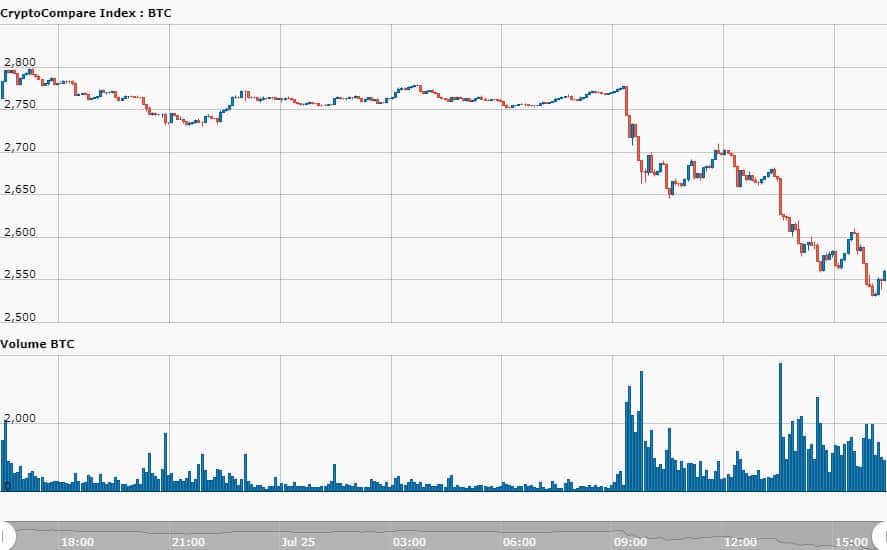 Charles Hayter, the CEO of CryptoCompare.com, explains some of the technical details: “BIP91 was proposed as a way to show support and commit mining groups to SegWit. It was locked in early on Friday 21st with approx 95% of hash power supporting it.

Once activated BIP91 compatible nodes will reject any block that doesn’t include bit 1. Bit 1 signalling blocks only signal for SegWit hence locking in Segwit (BIP141). It was thought this would make it unlikely for any hash power to fork Bitcoin (UASF, BIP148) which led to the renewed confidence.

However, fear around a potential BTC split was increased as Bitcoin Cash announced it would go ahead with the a fork (following the original contingency plan by Bitmain for the UASF).”