It’s no secret that Wall Street has been warming up to the potentials of bitcoin, whether as a traded asset for customers, market making, or providing trading technology, many in the financial industry view digital currencies as here to stay.  We have also seen the emergence of traditional asset analysts beginning to create both fundamental and technical research on bitcoins.

For today’s Bitcoin Technical Analysis column, DC Magnates presents research from Eddie Tofpik, Head of Foreign Exchange at ADM Investor Services.   Covering bitcoin is a first for Tofpik, who is known around the industry for providing daily FX and commodity market commentary, longer term technical analysis, and writing about how new financial regulations will affect the industry.  The bitcoin commentary occurs as the digital currency was added this week onto Thomson Reuters Eikon charting platforms.  If you like deep technical analysis, Eddie Tofpik’s research has got you covered. 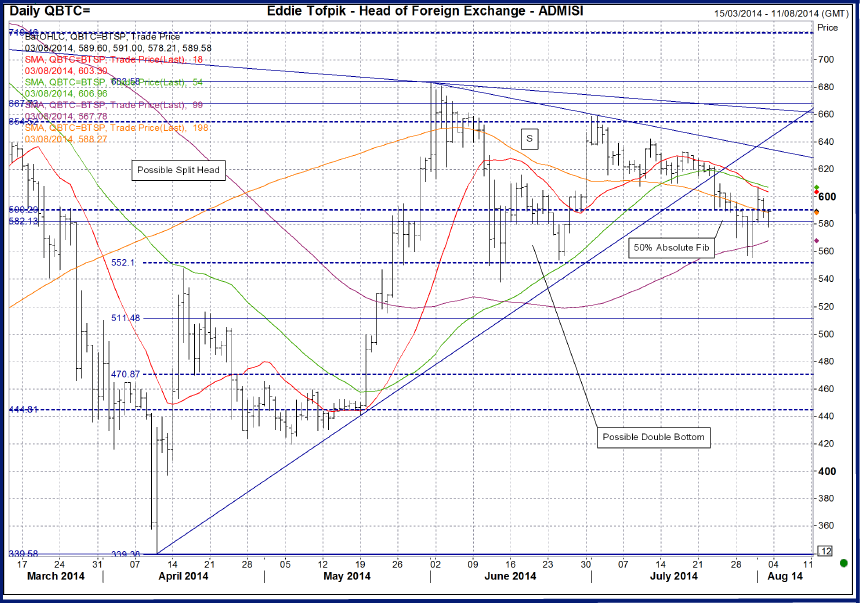 A first for me, a regular monthly Technical Analysis of a cryptocurrency… Bitcoin!

Looking at the longer term charts coming in-on the Monthly Chart, after an Indecisive Spinning Top Formation, the market tried lower last month and this was reflected in the Weekly Chart with two Indecisive Dojis followed by and Open and Close Black Marubozo that showed the bearish action well.

On the Daily Chart above we have what looks like two failed patterns- the longer Reverse Head and Shoulders (H+S) from Fed to data and the failed Double Bottom Pattern of the June running into July move!  The drop down was halted somewhat in late July with an ‘almost’ Key Reversal Up but then again it was an ‘almost’ pattern in a bear move so it doesn’t look like it will hold to scrutiny. What was interested was the bounce happened from the 38.2% Fib of the April to June move, the late June low at 552.10 and to a minor extent it seems the Medium MA (currently 567.72).

What is also interesting is that we are resting upon the 50% Absolute Fib support as support at 582.13! Now we have been under 582.13 in recent times and we have even had two consecutive closes underneath but we have reversed up each time… so watching this be important as a continuation of the bearish move will require at least (now) three consecutive closes underneath!

Finally, we also have a Dead Cross of the Short MA down through the Short/Medium MA.. this can be viewed as a minor bullish indicator but it is the first Dead Cross for quite some time! So if there was a target for the downside where would it be-well the recent 50% Fib at 511.48 might suit but this might not happen.  Topside, look for consecutive closes over the recent Downtrend (currently 634.07) to signal a change…Perhaps

Overall, Tofpik has Bitcoin rated as a ‘Trend Down?’ which he defines as “Any one or more of the following may occur! Market has turned down/fallen and is likely to carry on, usually till at least the next Monthly FX Commentary.  Moving Averages are pointing lower of have either crossed, formed a ‘Dead Cross’ or topped out.  Chart patterns and trendlines (Channel, Support, Andrew’s Pitchfork etc..) point lower.  Non appreciable support levels (Fibs, Historical, etc) are noted.

ADM asked that we include this risk warning when distributing the analysis.  (click to expand)

Share this article
Tags: eikon / trading
Got a news tip? Let Us Know