Reuters Eikon has added Bitcoin to its suite of tracked assets, announcing that “traded rates and volumes as well as top of book quotes are all now available for you to act before the market moves.” The service will be tracking USD trading activity from the Bitstamp bitcoin exchange. One may ask how a trader will be any more ahead of the market than by following Bitstamp directly.

The features will track data like bid, ask and traded prices, plus volumes and intraday and historical charts going as far back as 3 years.

The announcement is generally highly upbeat about Bitcoin. It calls the Bitcoin market “extremely durable”. It also states:

“With online vendors such as Expedia and Dish Network accepting bitcoins as a form of payment, the bitcoin market is experiencing a surge in popularity, with many government officials beginning to recognize it as a valid means of exchange.” 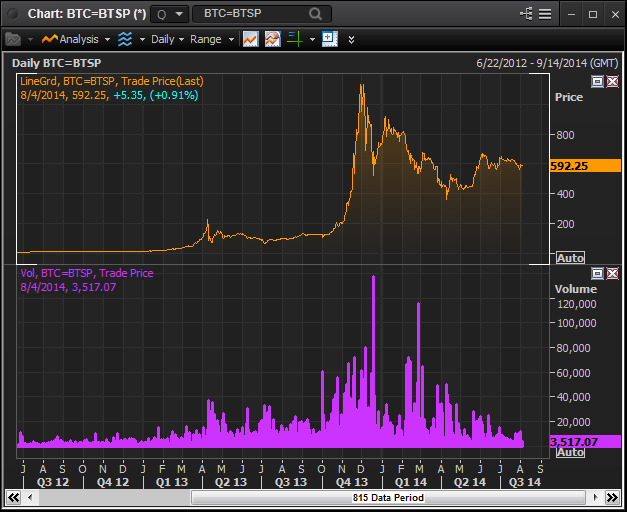 The tracking of volume from only one exchange may also be a point of debate. While Bitstamp is a leading exchange, its volumes are but a fraction of the total market and are reportedly exceeded by several exchanges in China. While they rank near the top in dollar-based volume, it may be more prudent to omit volumes altogether, as done by Google and Yahoo in their tracking of Bitcoin as currency.

When Yahoo and Google added Bitcoin to their Finance portals, there was no accompanying announcement. For all we know, the features may have been around for some time, notwithstanding the likelihood of keeners having checked for it every day for the past few years. When Bloomberg added Bitcoin, it was abundantly clear that it is not endorsing Bitcoin in any way. They even went as far as to make a disclaimer about its controversial nature. Reuters’ exuberance does therefore appear somewhat out of place.

Share this article
Tags: bloomberg / eikon
Got a news tip? Let Us Know