As Bitcoin is entering its 9th (10th? 11th?) week of stagnancy, it seems more and more like the cryptocurrency may be in the midst of what could become an extended ‘alt-season’: a period of time in which altcoins outperform Bitcoin in terms of price (and, as a result, media attention.)

Last week, Finance Magnates reported that quite a few altcoins seemed to be making upward movements in leaps and bounds: Tezos (XTZ), Cardano (ADA), Dogecoin (DOGE), Stellar Lumens (XLM), and many others have climbed up significantly in recent weeks.

The value of LINK seems to have been climbing at a rather steady rate since mid-March, following the ‘Black Thursday’ price crash that took place on March 12th and 13th. However, LINK’s bull run really seems to have accelerated starting in July.

Indeed, at the beginning of the month, LINK was sitting around $4.60; the coin reached a new all-time high on July 15th, when it moved just over $8.70 (an increase of nearly 90 percent.) 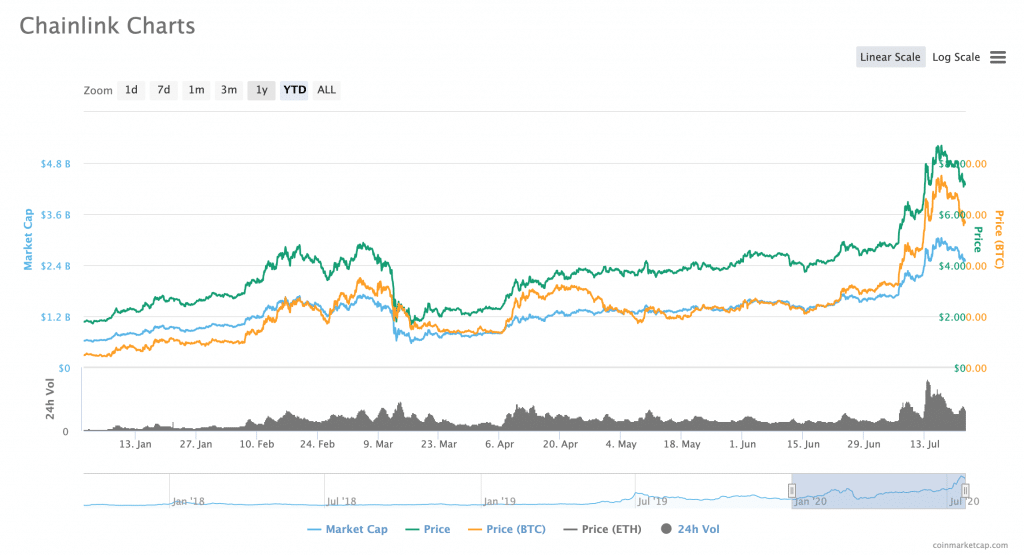 At press time, the value of LINK had corrected to $7.16, shaving off the increase to 55 percent since the beginning of the month. Still, the token’s price increase represents one of the largest altcoin price movements over the last several months.

What’s driving LINK up? Is the value based on increased usage or speculative hype?

And will the current price correction continue, or could LINK’s bull rally just be beginning?

Evidence of increased usage on ChainLink’s network is strong

It’s important to note that Chainlink’s price increase has been coupled with a verifiable increase in activity on its network, which seems to suggest that the asset’s price growth has been at least partly organic.

Indeed, blockchain analytics firm Into the Block tweeted findings on July 19th that “the number of transactions over $100,000 in #ChainLink has increased 15x in 3 months while in #Bitcoin has remained boringly steady.”

The number of transactions over $100,000 in #ChainLink has increased 15x in 3 months while in #Bitcoin have remained boringly steady

Our analysis shows that there were only 22 $LINK transactions over $100,000 in mid-April. Well, that number skyrocketed to over 300 n July 13rd. pic.twitter.com/zlgD99VtOz

Additionally, Spencer Noon, investor at DTC capital, posted on Twitter today that “the number of active $LINK wallets with more than ten tokens has tripled from 10k to 35k” over a roughly 12-month-long period, and that “10k of these new addresses have appeared in the last few weeks alone.”

Noon added that the Chainlink network is also “doing 90k transactions per day, up from 30k a year ago.”

② @chainlink is doing 90k transactions per day, up from 30k a year ago.

Where are all of these new users coming from?

Vance Spencer, co-founder of investment company Framework Ventures, explained to Finance Magnates that he believes that much of LINK’s price increase–and the corresponding increase in usage–has to do with heightened activity in another part of the blockchain world: decentralized finance, or DeFi.

“This rise could be attributed to Chainlink’s scaled usage in the DeFi space,” Spencer told Finance Magnates in an email. “The market cap for DeFi projects has grown tremendously in the last half-year, and a significant part of the ecosystem now relies on Chainlink for oracle functionality.”

And the DeFi sphere has grown tremendously, indeed–Will McCormick, director of communications at global cryptocurrency exchange OKCoin, told Finance Magnates last week that the value of assets “locked” in DeFi networks has increased “almost 5X in the last 12 months.”

The increased focus on DeFi platforms and tokens is also evidenced by price rises in a number of other DeFi-associated assets, such as Compound (COMP), which famously peaked at nearly $370 in late June following its mid-June launch at roughly $90.

In an article published by CoinDesk earlier this month, eToro market analyst Simon Peter also said that the connection between ChainLink and the DeFi sphere hasn’t happened by coincidence: “ChainLink [has been] making all the right noises by partnering with a number of projects in the decentralized finance (DeFi) space,” he said.

Chainlink’s partnerships have also extended far beyond the DeFi ecosystem. Most significantly, perhaps, were the network’s partnerships with Google and Oracle, which were formed in 2019.

LINK’s most recent big rally also seems as though it may have been largely driven by another significant partnership: SmartContract, the company behind the Chainlink oracle network, announced in mid-June of 2020 that it would be assisting China’s state-backed Blockchain-Based Service Network (BSN) with sourcing of reliable information about the real world.

BSN is excited to announce the six public chains that will be integrated at the launch of the redesigned BSN International Portal @ethereum @block_one_ @tezos @NervosNetwork @Neo_Blockchain @irisnetwork @IRITAchain @chainlink @dfuseio https://t.co/CGtw2azbaQ

ChainLink seems to have orchestrated its own ‘network effect’

Some analysts believe that ChainLink’s efforts toward partnership-building have positioned it at the top of the market.

Indeed, Vance Spencer explained to Finance Magnates that “in the oracle space, Chainlink is the market leader and has developed a network effect, similar in nature to Ethereum’s first-mover advantage on the smart contract platform layer.”

The term “network effect” describes a phenomenon in which the value of a product or service increases according to the number of others using it–the more users that Chainlink has, the more valuable it becomes. In ChainLink’s case, the value of the network (and the LINK token) seems to increase with each new partnership it forms.

Therefore, it may well be that much of the price increase of the LINK token is part of a new movement of altcoin rallies based on usage and viability, unlike the largely hype-driven rallies that took place during the last altcoin season in 2017 during the ICO boom (when just about anything with the word ‘blockchain’ on it was going through the roof.)

Indeed, Andrea Zanon, chief executive of the Nimbus Platform, said to Finance Magnates last week that “each of [the] tokens” that has recently experienced a price rise “has its own fundamentals.”

Staking could bring more hodlers to ChainLink in the future

In other words, even if the price rallies–including LINK’s–are partially driven by hype, they seem to also be largely driven by genuine usage.

“Users are excited by Chainlink because the technology theoretically solves a longstanding problem with smart contract platforms,” Vance Spencer said. “If their mission is successful, they’ll have moved us beyond the realm of simply moving tokens around to a world in which blockchains are used to interact with events and important financial transactions.”

Vance also pointed to an important piece of ChainLink’s roadmap: “additionally, ChainLink will eventually have staking, meaning that normal users will be able to earn income streams by providing useful data to smart contracts,” he said.

Indeed, staking, yield-farming, and other forms of passive-income generating models on various cryptocurrency networks and platforms are becoming increasingly popular. Finance Magnates reported in September of last year that “staking provides a financial incentive for people to provide the network resources for validating transactions and for maintaining the integrity of a network’s services.”

Difficulties along the way

Of course, it’s not all sunshine and roses for ChainLink or its token–a twitter poll by renowned broadcaster Max Keiser found that out of more than 1,000 respondents, 72.4 percent of respondents believe that LINK buyers are “new, unique suckers.”

Are LINK buyers re-purposed DOGE buyers or a new, unique class of suckers?

Additionally, LINK seems to have been the target of a number of financial manipulation schemes.

For example, the asset may have been a part of at least one pump-and-dump scheme in the past, though it’s unclear who orchestrated the scheme: Venture Beat reported in September of 2019 that blockchain analytics company AnChain.ai found that “the trading pattern of Chainlink’s Link cryptocurrency suggests a suspicious ‘pump-and-dump’ scam, or an attempt to manipulate the price of the cryptocurrency token.”

Additionally, earlier this month, CoinTelegraph reported that “a suspicious asset manager” known as Zeus Capital “is claiming to have entered into a short position targeting a 99% crash in the price of Chainlink,” following allegations that ChainLink was “Crypto’s Wirecard.” However, the company appears to have been a malicious entity formed specifically to spread negative rumors about ChainLink; its motivations are still unclear.

Looking at the zeus capital website & #ChainLink report ($LINK): Can't be 'independent research' since they have an active position. Claim to be in NY and London but none of the SEC/FCA required disclosures appear in their report: https://t.co/EXZmzeGwoX, https://t.co/42jlV9srfC

Therefore, it’s possible that the recent slump in the price of LINK could be a sign that the token is somewhat overvalued: that its partnerships–while impressive–still need more time to flourish, and that its reputation may need more time to gain trust that may have been damaged by the alleged outsider pump-and-dumping, as well as the reputational attacks from Zeus (false though they may indeed be.)

Still, the amount of usage that the ChainLink network seems to be getting could point to a longer-term upward trend–one that will undoubtedly be filled with necessary price corrections along the way.

Both price levels are great areas to be accumulating or putting in Longs for the long term trend. This will very likely turn into a large scale parabolic structure.$LINK pic.twitter.com/zQNPz2uZ2O

What are your thoughts on the future of ChainLink? This article does not constitute investment advice. Finance Magnates reached out to Zeus Capital and ChainLink for commentary on this article; they did not immediately respond for comment. Comments will be added as they are received.