Reddit is going dark today as numerous subreddits, including some of the most popular such as IAmA, AskReddit, funny, books, science and pics have been locked by their moderators to only be available to private group users.  Among crypto related sites, r/bitcoin is still up, but bitcoin paradoy site, r/buttcoin, and the popular r/dogecoin subreddits have both gone dark.

Getting tagged as #RedditRevolt, the actions of moderators occurs as they are protesting the user chooter, AKA Victoria in real life, has been let go from her position at Reddit.  According to moderators, Victoria has been the main employee assisting moderators in conducting AMA (ask me anything) sessions at Reddit. As a result of her release without communicating this with the Reddit community, moderators have decided to revolt against the site’s admins with a revolt of their own (more explanation here)

Voat to the rescue (almost) 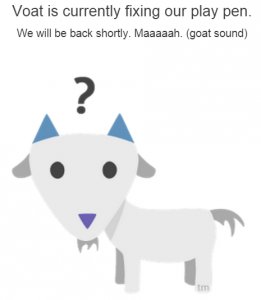 As Reddit goes dark, it has led community members to move to Voat, a social community similar to Reddit, but with a stated mission of ‘no censorship’.  Prior to today, Voat had been gaining steam last month as community members had their own #RedditRevolt in June due to Reddit releasing a new definition of harassment which had led to scores of user being removed from the community as well as some subreddits getting closed.

For Voat, the recent attention has led to not only a growing list of users, but also critical funds in the way of donations.  To assist with its funding, Voat’s single donation method is via bitcoins.  With the current #RedditRevolt and new users coming to the site, Voat has experienced a surge of traffic but also seen its site get slow as well as go down.  To alleviate the problems, requests of donations to Voat have increased, with users donating in record numbers today.

Since launching for bitcoin donation in September 2014$, Voat has received a total of 17.23 bitcoins.  Of this total over 5.2 confirmed bitcoins have been donated today alone ($1300).  The figure compares to the previous record of 2.6 bitcoins sent on June 13th, when the user #RedditRevolt occurred.  All together, over the last month, bitcoin donations have accounted for around 16 bitcoins since the start of June’s initial #RedditRevolt.