The police raid on Deutsche Bank that began yesterday is continuing for a second day, according to a report from Reuters. A spokesperson from the Frankfurt prosecutor’s office said that the raid is seeking evidence regarding allegations related to the infamous “Panama Papers.”

More specifically, the investigation is examining the activities of two unnamed Deutsche Bank employees that allegedly assisted customers in creating offshore shell companies that could be used to launder money starting in 2013.

The raid began yesterday when a group of 170 police officers, federal agents, prosecutors, and tax inspectors showed up to search Deutsche Bank’s offices, seizing large volumes of written and electronic business documents. The large amount of material is allegedly the reason for the second day of the search.

The Bank is “Cooperating Fully,” but Officials Suspect That Illicit Activity Has Continued

The bank said in a statement that it is “cooperating fully” with investigations. The negative attention has caused a small drop in Deutsche Bank’s stock valuation; 3.4 percent was lost on Thursday.

“We have already provided the authorities with all the relevant information regarding Panama Papers,” Deutsche Bank spokesman Jörg Eigendorf said on Twitter.

As far as we are concerned, we have already provided the authorities with all the relevant information regarding Panama Papers. Of course, we will cooperate closely with the public prosecutor’s office in Frankfurt, as it is in our interest as well to clarify the facts.

According to a New York Times report, “the size of the raid and sums of money involved suggest that a yearslong effort to remake the bank’s culture and improve compliance has fallen short.” The same report indicated that hundreds of millions of euros are under investigation.

The Times also reported that over the last ten years, Deutsche Bank has paid billions of euros in fines for various forms of misconduct. The bank has allegedly deceived buyers of mortgage-backed securities, rigged benchmark interest rates, and manipulated forex trading in a way that caused its customers to suffer. 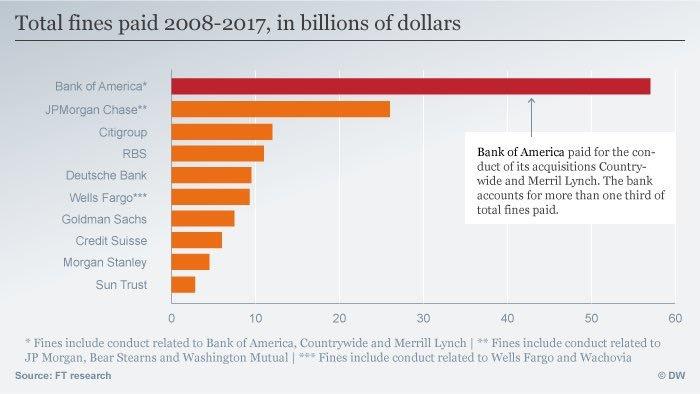 Deutsche Bank isn’t the only bank to have been accused or charged with misconduct. As cryptocurrency markets continue to flounder amid accusations of widespread market manipulation and involvement with criminal activity, research conducted by the Financial Times found that Bank of America has paid almost as much money in misconduct fines than the entire marketcap of Bitcoin is currently worth.

No-coiner: Crypto is evil because it facilitates money laundering.

Special thanks to Victor Golovtchenko.