Now, questions over which network is the “real” Bitcoin Cash (sound familiar?) and whether the crypto markets at large can handle the split remain unresolved.

From November 15-19, Bitcoin Cash ABC was listed on CoinMarketCap as BCHABC. On November 20th, however, the listing changed back to BCH. Coinbase also announced that Bitcoin Cash ABC would retain the Bitcoin Cash ticker symbol, citing the fact that “ABC has a higher hashrate and a longer proof-of-work chain.” BCHSV remains a separate listing.

Update for customers with Bitcoin Cash (BCH) stored on Coinbasehttps://t.co/XsavUWTIIg

However, Bitcoin Cash’s cumulative Proof-of-Work has stayed consistently ahead of Bitcoin Cash SV’s.

However, there were several important changes–first of all, the ABC in ‘Bitcoin ABC’ stands for ‘Adjustable Block Size”. The post explaining the changes lays out a two-pronged approach to scaling: “remove immediate implementation bottlenecks to increasing the block size limit. Lay the technical groundwork for massive future on-chain scaling.”

Additionally, Bitcoin Cash ABC has added some pieces of code that facilitate interoperability between its own network and other crypto networks.

Supporters of Bitcoin Cash SV, or Bitcoin Cash “Satoshi Version,” proposed quite a few radical changes to the BCH platform in an attempt to restore the “original Satoshi protocol,” referring to mysterious Bitcoin creator Satoshi Nakamoto. In this version of the network, block sizes were increased from 32MB to 128MB. In other words, the number of transactions that can be processed at once was quadrupled.

Not a day, not weeks, not a burst.

Continuous competition until one dies as we do not stop pic.twitter.com/UbHPWRF7UF

In the days preceding the fork, the technical differences between Bitcoin Cash ABC and Bitcoin Cash SV were not at the forefront of the debate over the two protocols. Nick Spanos, the founder of Bitcoin Center NYC, explained to Finance Magnates that “The story, unfortunately, developed based on personalities and rhetoric rather than the technology. The ‘Hash War’ lost focus on the facts and the story turned puerile.”

Spanos was referring to the highly-public spat between Craig S. Wright and Roger Ver, in addition to Bitcoin ABC, Ver’s associated group of developers. Wright is the self-proclaimed Bitcoin creator (a claim that has been deemed largely insubstantial, earning him the nickname “Faketoshi”) and the developer of Bitcoin Cash SV. Roger Ver, widely known as “Bitcoin Jesus,” is the lead developer and most public face of the Bitcoin Cash ABC initiative. Ver’s claims that Bitcoin Cash was the “real Bitcoin” eventually led him to be known to some as “Bitcoin Judas.”

Spanos explained that Wright’s twitter antics led to overblown attention and media coverage, resources that should have been spent elsewhere. “The attention and discussions should have centered around Bitcoin Cash ABC and Bitcoin Unlimited, which received 49% and 37% of miners’ votes, respectively,” he said. “Bitcoin SV (Satoshi’s Vision), which garnered the support of only 6% of miners certainly controlled the media and discussion. Too much rhetoric got picked up and muddied the discussion.”

The Markets Are Suffering

At the time of writing, neither coin was doing well in terms of market cap. In fact, this latest fork is said to have taken a serious toll on the markets at large, which were already suffering heavily.

“A hard fork scheduled during a tough bear market was sure to have some effect,” Spanos said. “However the contentiousness of it could certainly have been a major factor in the price slump that resulted. Seeing bitcoin hit below $4,000 was certainly unexpected and a reminder that while volatility has lessened over time, it is still present and disruptions to the market can bring about price fluctuations. We also cannot ignore the recent drop in traditional markets and the role that played here.” 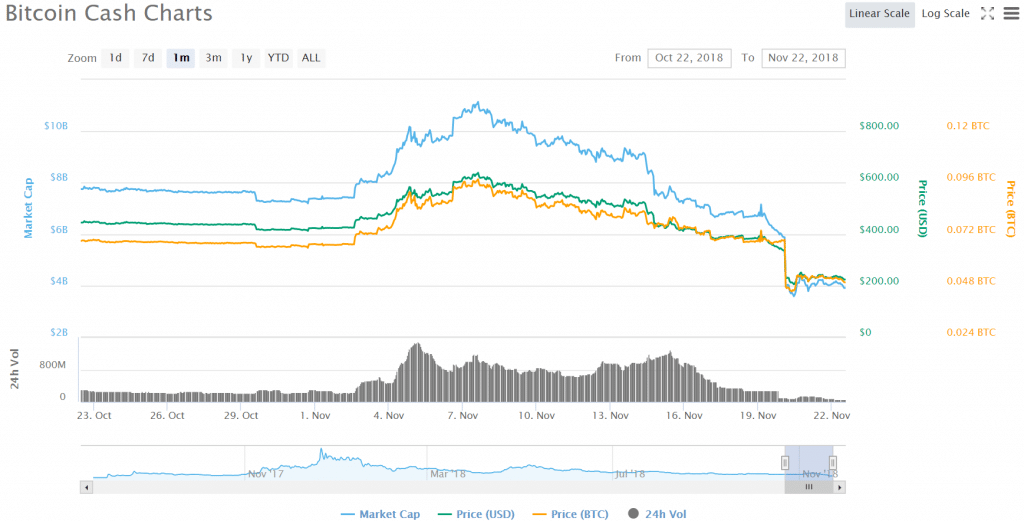 At the same time, though, “this is nothing new to a growing and maturing market. The overall price volatility and price fluctuations brought about by major events will only continue to lessen over time,” Spanos added.

However, not everyone is so optimistic about the future. “Craig Wright is determined to see SV succeed, and so is Roger Ver and his supporters,” the eCoin4dummies Team explained in an email to Finance Magnates. “At the end of the day, users who were supposed to execute and even build smart contracts over the network are coping with huge losses—and staying away from the network. For the market to recover then we need an urgent consensus or the network dies–users migrate to BTC or DASH and other platforms which have been superior in scalability and speed.” 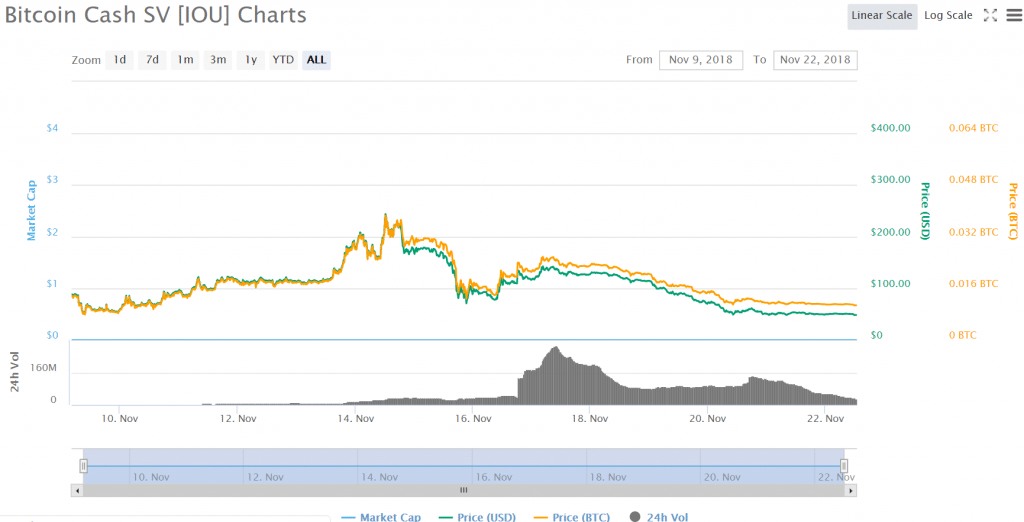 For crypto skeptics, the recent fork at the surrounding drama is nothing but flame for the fire. “What the recent debacle surrounding the tripartite Bitcoin Cash fork showed us is yet another reason that cryptocurrency is a passing fad, a massive bubble (that’s currently popping), and something that will be looked back on as a total joke, probably on par with Beanie Babies,” said Dary Merckens in an email to Finance Magnates. Merckens is CTO of Gunner Technology, an AWS Partner specializing in JavaScript development for government and business.

“The fact of the matter is you don’t want a bunch of hard-headed nerds running your currency markets – that’s where Bitcoin Cash came from, and that’s where the recent forks came from: nerds arguing about nonsense.”

While the arguments on both sides of this “hash war” may not exactly nonsense, Merckens does have a point. Concerns about the power that these “hard-headed nerds” have over the Bitcoin Cash network may have just been realized–on its face, it seems that this clash of egos was the main cause for an industry disaster.

Indeed, Craig S. Wright has gone so far as to threaten to use his influence to “tank” the price of Bitcoin. At the moment, Wright is reportedly renting massive of amounts of hash power to support the BCHSV network. If there aren’t enough supporters to make the network profitable on its own, Wright has threatened a sell-off that could cause further damage to the price of BTC.

To all BTC miners…

If you switch to mine BCH, we may need to fund this with BTC, if we do, we sell for USD and, well… we think BTC market has no room… it tanks.

Think about it. We will sell A Lot!

Consider that….
And, have a nice day

(BTC to 1000 does not phase me) pic.twitter.com/oUScEahtWc

In an attempt to sound as cool and diabolical as a Bond villain, Wright also pointed out that if Roger Ver and Binance CEO Jihan Wu (who supports BCHABC) sell their Bitcoins, the price of BTC could be damaged even further.

Oh. And @JihanWu and @rogerkver selling… they will also have to sell BTC to pay rented hash.

Have a nice day

“The implication has been serious. We strongly believe that the hash rate power has destabilized Bitcoin difficulty and its hash rate and could be part of the many reasons why the total crypto market valuation is dropping,” the eCoin4dummies Team wrote in an email to Finance Magnates. 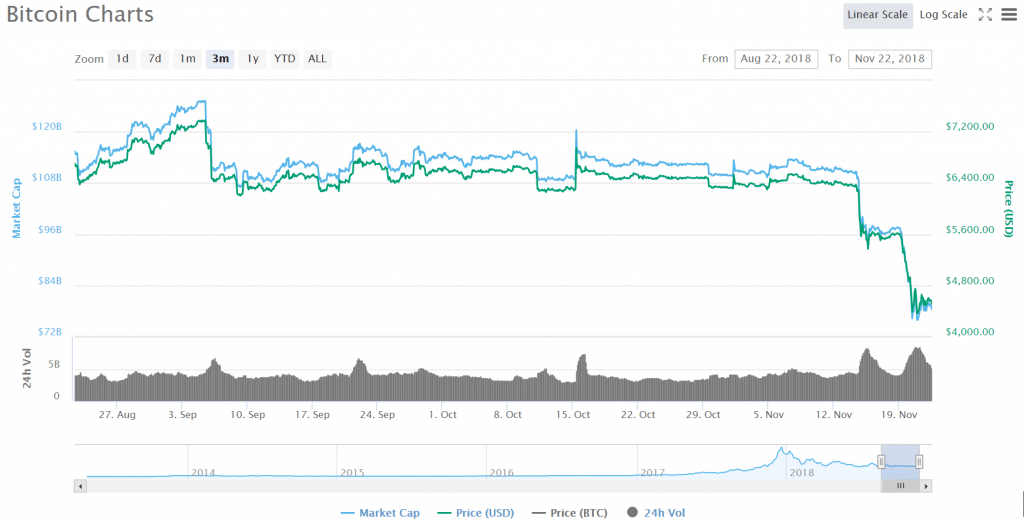 “Though we cannot substantiate if there is a direct link between drop of BTC prices and the drop is hash and mining difficulty and whether the 90,000 S9 miners Jihan Wu had mobilized in NE China where deployed or not, he had mentioned that any form of ‘dirty’ play from SV and CoinGeek would force Bitmain to defend BCH even if BTC prices could dip.”

I have no intention to start a hash war with CSW, because if I do (by relocating hash power from btc mining to bch mining), btc price will dump below yearly support; it may even breach $5000. But since CSW is relentless, I am all in to fight till death! pic.twitter.com/d95axXEwFS

“But as it is the hard fork war is not yet over though most exchanges and services providers running BCH clients are backing the ABC version, the civil war is definitely costly for both camps,” the team continued. “At one point, the Bitcoin.com mining pool which is run by ABC proponents had more hash power than the BCH network. This comes hours after it seemed like the SV and CoinGeek mining pools were going to stage a successful 51 percent attack and ‘destroy’ ABC.”

Of course, they were unsuccessful. But at which point will this ridiculous battle end? And what effect will all of this have on….

“What effect this will have on the overall markets is unclear. What’s clear is that these crypto markets are quickly going to crash towards zero when all of the investment dollars flood out of the market and the only reason crypto survives at all is so dorks can buy drugs on the dark web, which has always been just about the only ‘value’ added by cryptocurrency,” Merckens said.

“Bottom line is crypto is dead. It always was dead, just like tulip bulbs in the Netherlands in the 17th century and land in Florida in the 1920s. Cryptocurrencies are a bubble. Always have been. And I would say ‘always will be,’ but they’ll probably be completely gone in the next couple years, for all intents and purposes. And good riddance!”

There could be some truth to Mercken’s predictions. If nothing else, this whole episode has revealed how utterly connected these allegedly “decentralized” networks are to certain individuals’ desires for power. Now, with Bitcoin lower than it has been in over a year, the crypto community will have to seriously reconsider its trust in some of the world’s largest and most important crypto networks.

Boycott Roger Ver & Craig Wright. the first one is a megalomaniac , nacissist social akward and the other one is a childish megalomaniac liar (he is not satoshi). stay with BTC (core). they shouldnt even be named. these people are suicidal on a mission and want to take everything down but they will not succeed. they are nothing

BTC is really decentralized, serious and unstoppable not these copycats (b cash and SV) ran by sociopaths