Over the course of the past year, the crypto bear market has totally reshaped the cryptocurrency industry. What was briefly a landscape of virtually unmitigated opportunity and cash flow has quickly begun to mature into a regulated, survival-of-the-fittest environment where companies and investors either sink or swim.

And indeed, hardly any corner of the market has remained unaffected by this bearish reformation. Last week, cryptocurrency news outlet The Block reported that the cryptocurrency bear market had sunk its sharp claws into the OTC (over-the-counter) trading world.

OTC trading is trading that is conducted off of traditional exchanges–often, an OTC platform is a broker that facilitates direct interactions between buyers and sellers. In the cryptocurrency world, these OTC trades can be conducted by sending assets to a digital wallet, or in some cases, exchanging a physical hard disk where cryptocurrencies may be stored for cash.

The low prices that have resulted in the shutdown of a growing number of cryptocurrency hedge funds have (apparently) caused the OTC crypto trading world to shed a few pounds–and a few employees–as well.

What could be causing the OTC market to shrink? And how could this shrinkage affect other parts of the crypto industry in turn?

Over the Past Several Months, Layoffs Have Plagued the Crypto Industry at Large

“We can certainly see the connection [between hedge fund shutdowns and OTC layoffs] as many of the hedge fund transaction are facilitated through OTC desks,” explained Alon Karniel, VP of Marketing at AlgoZ, a Fingenom Group company, to Finance Magnates.

“The shutting down of these funds could have a direct effect on OTC employment world.”

Indeed, “the OTC world, like the rest of the crypto world is getting smaller,” said Kyle Asman, co-founder of BX3 Capital, in an email to Finance Magnates.

And further, “the OTC Market isn’t affected by the downturn in prices as much as typical exchanges,” Asman said. “As we have seen with crypto, when the prices drop, retail interest does so along with it. But OTC traders are likely to be trading no matter what the prices are.”

Earlier this year, Finance Magnates reported on the widespread layoffs that have taken place in a number of high-profile crypto companies, including some exchanges. Coinbase, ConsenSys, Shapeshift, Steemit, Bitmain, and a growing pool of other companies have all made the decisions to lay off employees, or even cut off entire branches of their business. 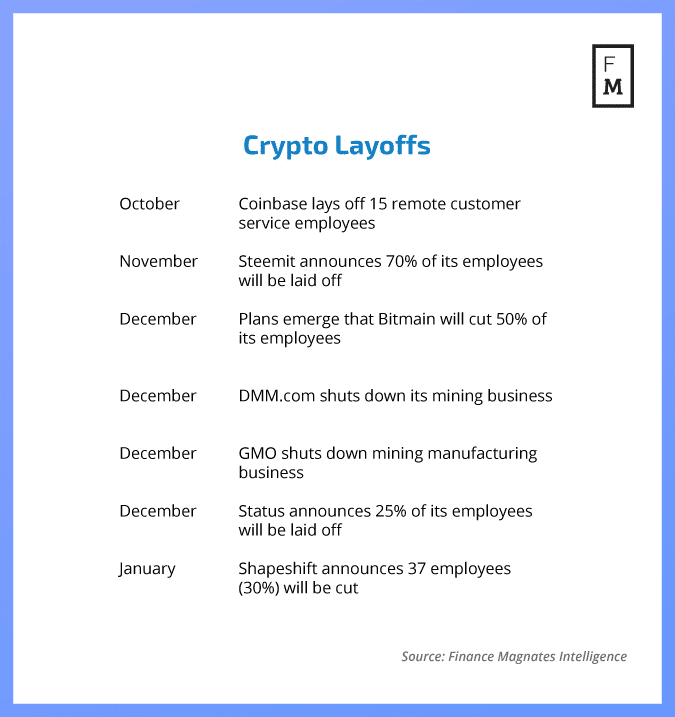 To be sure, “no one likes a bear market as it affects all players, including those in the OTC world,” Karniel continued. However, changes in the crypto world could also ultimately result in new opportunities and positive changes for those who are willing to roll with the punches: “a bear market could also be an opportunity due to low prices of currencies.”

And indeed, “in the bear market of 2018 the cryptocurrency community in general and OTC in particular ‘sobered up’ from the 2017 hype, but we see this is an essential phase in financial maturity of the cryptocurrency markets,” Karniel explained.

“While OTC deals experienced a steep decline in volumes, smaller profit margin and lower deal flow in the second half of 2018, today’s deals are more qualitative and more sustainable. We expect this trend to increase–traditional financial firms will offer OTC services and regulation will be enacted.”

Asman also sees potential growth in the OTC market’s future, but not until a turnaround takes place in the markets at large. “It will continue to grow again once [crypto] prices rise.” Like Karniel, he also believes that the OTC market will benefit from the entrance of institutional traders. “We will also see a boom in growth once more businesses start accepting crypto and use it as an instrument to hedge risk,” he said.

While the OTC crypto trading market may not seem of major interest to the casual cryptocurrency holder, some analysts have suggested that OTC trades are far more important to the global crypto ecosystem than most people know. In fact, over-the-counter trading has been found to be far more influential on the price of Bitcoin and other cryptocurrencies than it appears to be at first sight.

In fact, OTC trading is often left out of the conversation entirely when it comes to understanding and predicting price trends in Bitcoin–because OTC trading happens off of exchanges, it’s virtually impossible to account for it when it comes to things like global trading volume patterns.

However, research firm TABB Group published a report last August saying that more than $12 billion in BTC is trading through OTC platforms every day. For comparison, Coinmarketcap reported that just $10.1 billion in BTC had been traded through the exchanges it tracks over the last 24 hours.

Just read an estimate from the TABB Group (in a $5000 report) that OTC crypto markets exceed exchange volumes by 2-3x. That would mean 1-1.5MM BTC is traded OTC *daily*. Strange it’s not visible on the blockchain, which shows a meager 100k/day.

OTC trading is rumored to be the preferred exchange method of crypto ‘whales’–traders who hold enough of a cryptocurrency in order to have a significant effect on its price through their trades.

Indeed, Monica Summerville, researcher at TABB, explained that “our reports are based on interviews and with participants in markets, cover more than BTC and keep in mind that not all transactions show up on public blockchains as many venues omnibus accounts so only net changes to their positions will be written to [the] public blockchain.”

OTC Trading May Be More Popular to Crypto’s “Middle Class”

Because OTC trading is difficult to track, it can be hard to identify patterns between the price of Bitcoin and OTC trading volumes. Does a higher coin price cause an uptick in OTC trading? Or vice versa?

Therefore, while some believe that OTC trading will continue to grow only after prices rise, some analysts claim that OTC trading is already on its way up. Indeed, Genesis reported that its OTC trading volume was up 50 percent year-over-year.

Further, some have suggested that crypto ‘whales’ and large institutions aren’t the only ones using the services. Dr. Dima Zaitsev, Business Analytics Department Chief at ICOBox, wrote in a report for FXStreet that OTC trading has become attractive to crypto’s “middle class.”

“Global changes taking place in the marketplace necessitated the re-evaluation of strategies related to trading digital assets, and at this point it can safely be said that trading through crypto exchanges is gradually being replaced by over-the-counter (OTC) trading,” Zaitsev wrote.

Zaitsev pointed out that this theory is also supported by the fact that a number of conventional exchanges have launched their own OTC trading desks over the last year. “The high demand for this solution can also be seen from how actively this type of service is being launched by the largest global crypto exchanges, such as Binance, Coinbase, Bittrex, etc. – despite the fact that OTC trading essentially takes business away from them,” he said.

Crypto OTC Made Better with #Binance.

However, Zaitsev pointed out that there is a critical hole in the OTC trading world for mid-level investors. Indeed, the OTC market seems to be geared toward massive investors–Zaitsev listed LocalBitcoins as a platform for trading “nominal” amounts of Bitcoin but said that for investors who want to trade more than .10 BTC and less than 1000 BTC, there is a serious lack of options.

“In the current situation,” new mid-level cryptocurrency investors “will immediately discover that it is impossible for them to quickly and profitably buy cryptocurrencies,” Zaitsev wrote. “They do not have sufficient funds for major OTC platforms, small-scale retail services offer bad rates, and crypto exchanges have low capacity and often lack necessary funds.”

Of course, some independent brokers may offer OTC services to mid-level investors. However, these small, independent OTC trading platforms are not as reputable or as secure as those that have been created to serve major investors.

And indeed, OTC platforms in a broader sense are still regarded by many as risky business. This is because for as unregulated as most traditional cryptocurrency exchanges are, OTC platforms are even less-so.

“Generally speaking, in a bear market, OTC activity is riskier because asset pricing may differ from stable market pricing, due to lack of liquidity, investment psychology such as ‘fear’ and a desire to get a higher price for OTC transactions in order to compensate for the existing high risks in the market, “ Karniel said.

“However, there are situations in which the ‘real’ prices of the currencies are reflected in the OTC market, since the operators in this field are mainly large holders who participate in the activity (whales) and some try to follow the movements of these ‘whales’ which can effect on the price on the exchanges.”

“Therefore when approaching an OTC firm, one must choose carefully and look for an experienced team who can price the assets correctly and negotiate transaction terms.”

Indeed, it will likely be some time before reputable OTC trading platforms become widely available to the retail market at large. Until then, however, the crypto world remains aware that creating a sustainable, well-regulated, and healthy OTC ecosystem is vital to the future of the crypto industry.