OpenBazaar’s open source software creates a decentralized, peer-to-peer (p2p) network of buyers and sellers, who exchange merchandise directly without an intermediary. Thus, there are no listing or transaction fees, and no ability to monitor users, collect their data or regulate trade.

Notably, commerce on the platform is conducted entirely in bitcoin, which is also exchanged directly between users without the need for a bank or payment processor. The project has thus captivated many in the crypto community, who appreciate its thoroughly decentralized flavor.

Also, in a theme similar to Bitcoin, the platform doesn’t involve any central servers. The software, along with a distributed database of the marketplace, is downloaded to your computer. Project leader Brian Hoffman commented:

Trust is gained through a review-based reputation system. It is also enforced, in the absence of a 3rd party escrow, via a “notary” who must sign off on every transaction along with one out of the two parties. 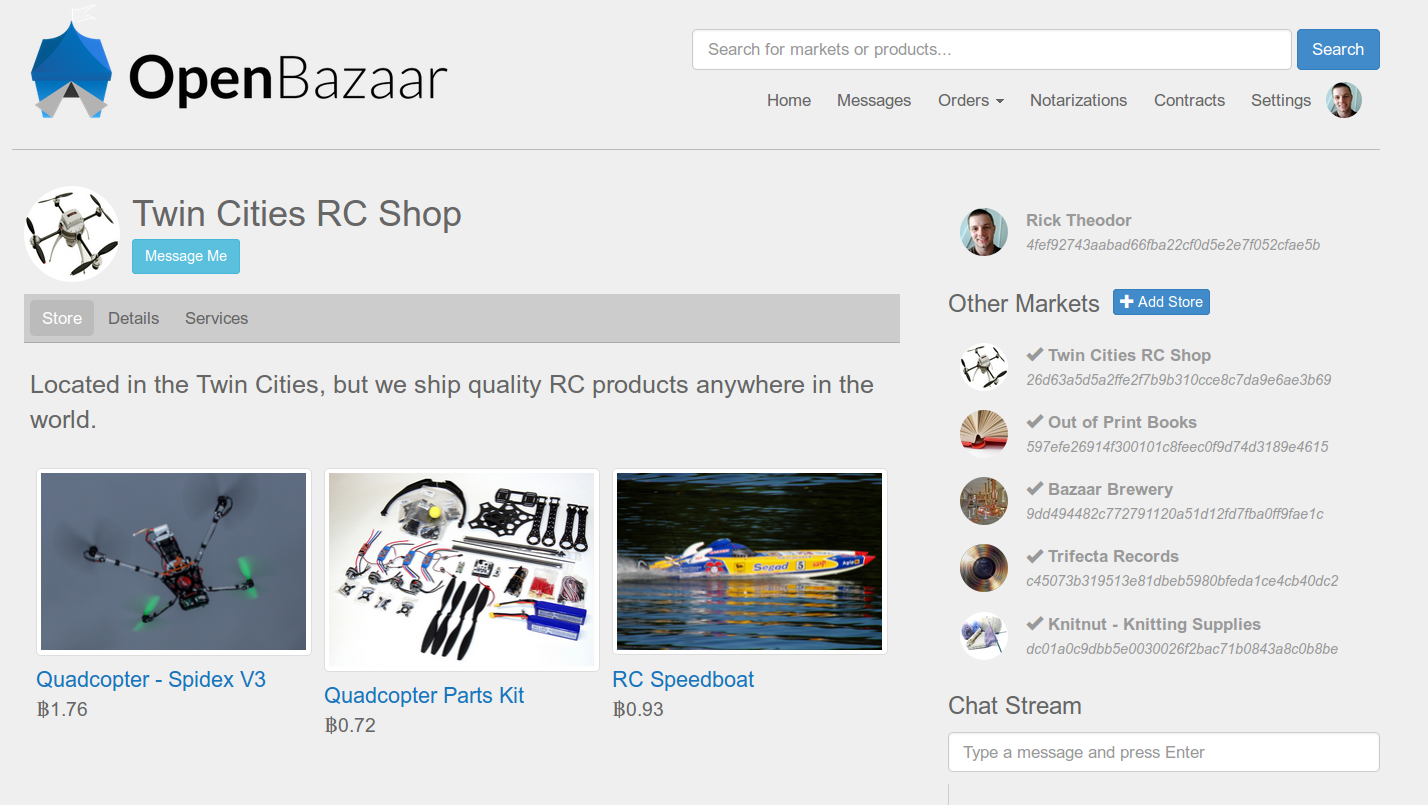 The project was launched in April 2014 and has since attracted the attention of nearly 1,400 developers, with about 100 actively contributing to the code.

The software was made available for public testing in its earliest stages, during which users reported bugs and recommended enhancements. During Beta 1.0, users were warned about carrying out serious transactions, which might entail the loss of their bitcoins. During Beta 3.0 “Tabriz”- a period following a massive crackdown on dark net marketplaces- users were reminded not to use the “software…for anything requiring critical privacy or anonymity”, and that OpenBazaar does not “condone illegal activity.”

As development continued, the decision was made not to release the final version of the code in one fell swoop, and instead periodically release new betas.

The funding will enable core developers to work full time on the platform, now in its fifth beta release. It will also go toward the development of OB1, a project that will offer services to OpenBazaar users aimed at bootstrapping the adoption of decentralized commerce.

Angel investor William Mougayar told Finance Magnates that OB1 is envisioned to eventually help with the operation’s revenue stream, which is otherwise absent due to OpenBazaar’s current no-fee model.

“Not a Super Silk Road, Just a Better eBay”

Not long after the OpenBazaar project started to gain traction, there was abundant discussion over the network’s potential to become a hotbed for the sale of illegal items. Transactions and conversations are private, solely between buyer and seller (and notary). No authority restricts what can be listed, and there are no central servers that can be seized. It can be the perfect replacement for Silk Road (though several others already exist), it was argued, and perhaps better.

A competing view argued that the invention is merely a tool to engage freely in commerce. It can be used for good or for bad. If used for improper activity, whatever its definition, the tool and its creators have done no wrong. At the time, Operations Lead Sam Patterson commented, “We’re not the ‘Super Silk Road.’ We’re trying to replace eBay in a better form.”

It was further argued by some that unlike the dark net drug marketplaces, the platform is not geared specifically toward illegal commerce. As such, it is less likely for it to become dominated by illegal activity, although the occasional back alley sale may be inevitable.

Indeed, founder Brian Hoffman reportedly conceded that he’s ready to leave the project if the marketplace, once in user hands and out of his control, becomes overrun with contraband.

DarkMarket creator Amir Taaki believes that it is naïve to expect a rosy outcome. “I think it’s intellectually dishonest to try and convince yourself that black market activity isn’t a big part of it. People want to buy the things you can’t buy on eBay like guns, drugs, or pornography,” he said at the time.

This may be true to an extent, but OpenBazaar has more value to offer users than just anonymity and freedom. Sales are free from any fees, a rare find on any online platform brokering the full transaction process. Furthermore, trust is enforced (to a degree) by the reputation system and ‘notary’ scheme- at no cost to the parties involved.

Finance Magnates reached out to the round’s investors for their perspective on such a marketplace, considering that their joint creation can potentially lead to undesirable outcomes, albeit indirectly.

Brad Burnham, Managing Partner at Union Square Ventures, drew a parallel between OpenBazaar’s protocol and that of the internet:

“Like TCP/IP and HTTP, the protocols that enable the Internet and the World Wide Web, the protocol itself is values neutral. TCP/IP and HTTP have been used in morally reprehensible ways, but they have also democratized access to information around the globe and empowered unprecedented entrepreneurial innovation. We believe the social benefit of empowering individual people to control the value of their work will drive the adoption of the protocol and that the legitimate buyers and sellers using the protocol will very quickly swamp the morally questionable users just as we saw happen with TCP/IP and HTTP.”

Furthermore, he clarified that his firm’s investment was a step removed from the OpenBazaar protocol:

“In any case, we did not invest in the protocol. We invested in OB1. OB1 supports the development of the OpenBazaar protocol and contributes to it, but they intend to build a business by offering value added services exclusively to the legitimate buyers and sellers in the OpenBazaar market place.”

Angel investor William Mougayar indicated that the project’s focus is on the technology, and not about facilitating illegal activity:

“As an investor and board member in OpenBazaar, I am not concerned about the speculation around it being used for illicit/illegal merchandise, because that’s not their focus, and they are far from it. OpenBazaar is more about the future of ecommerce than anything else.”

He conceded that the project was born as a ‘DarkMarket’ that won a 2014 hackathon in Toronto, but “where OpenBazaar is today, and where they are going, is miles apart from the original darkmarket intentions of that hack.”

He further elaborated that the code today has remnants from the DarkMarket project, but the team is finding that “it is attracting legitimate trade, and furthermore it is spurring a number of innovations around peer-to-peer ecommerce which you will see unravel over the next few months and years to come.”

He also reiterated the aforementioned arguments of OpenBazaar’s multiple value-adds, and mentioned the “Ricardian contracts aspect, which gives layers of rigor into the process of conducting transactions between parties.”

Share this article
Tags: Venture Funding
Got a news tip? Let Us Know