For many users, one of the most attractive things about cryptocurrency is the fact that it isn’t associated with banking. When one holds cryptocurrency, one has complete and total control over their finances; no government has access to what may be inside of a cryptocurrency wallet, and therefore, no one but you can determine how much tax you have to pay. Additionally, for those without access to reliable banking, cryptocurrency is truly revolutionary.

However, the independence of cryptocurrency comes with a price. Unfortunately, it’s entirely possible that if you lose access to your cryptocurrency wallet, you permanently lose the funds that are stored inside of it.

This was most recently demonstrated on a large scale when Canadian exchange QuadrigaCX lost access to the wallets that hold its liquidity pools. As a result, more than 115,000 users were left without access to over $100 million that they had collectively stored inside of the exchange.

Additionally, large-scale hacks on cryptocurrency exchanges and cybercrimes that target individuals have plagued the industry. A spokesman for cybersecurity company McAfee told CNBC that last year, cybercrime around the globe resulted in losses totaling $600 billion.

Indeed, “When you look at the cost of cybercrime in relation to the worldwide internet economy — $4.2 trillion in 2016 — cybercrime can be viewed as a 14 percent tax on growth,” he said.

Interesting development in the 2016 Bitfinex Hack. The US government was able to locate 27BTC from the hack. Still relatively minor compared to how much was stolen..https://t.co/A0QR0SMyN2 #Bitfinex #crypto #Bitcoin $BTC #hack

However, there are others that point out the cryptocurrency insurance industry may not be the safety net that many people hoped that it would be.

Crypto Companies May Not Cover As Much As Most People Think

Indeed, speaking with Finance Magnates in an interview conducted last month, founder of Trezor head of strategy at Casa Alena Vranova said that unfortunately, cryptocurrency insurance policies often don’t cover as much as policyholders would like to believe.

For one thing, proving that an insurance claim is valid may be difficult based on the very nature of how cryptocurrency is used. “When it comes to a claim, the claim adjuster in the insurance company will primarily look into ‘ok, can you prove that nobody from your company [had] the knowledge of the keys?’”, Vranova explained.

However, Vranova believes that insurance on cryptocurrencies may not be totally useless–or totally nonessential. “I don’t think that insurance is always unnecessary,” she said. “It’s very important in certain things and certain areas.”

But still, “in crypto, there’s less than five insurance companies that can do the coverage and actually understand this risk.” 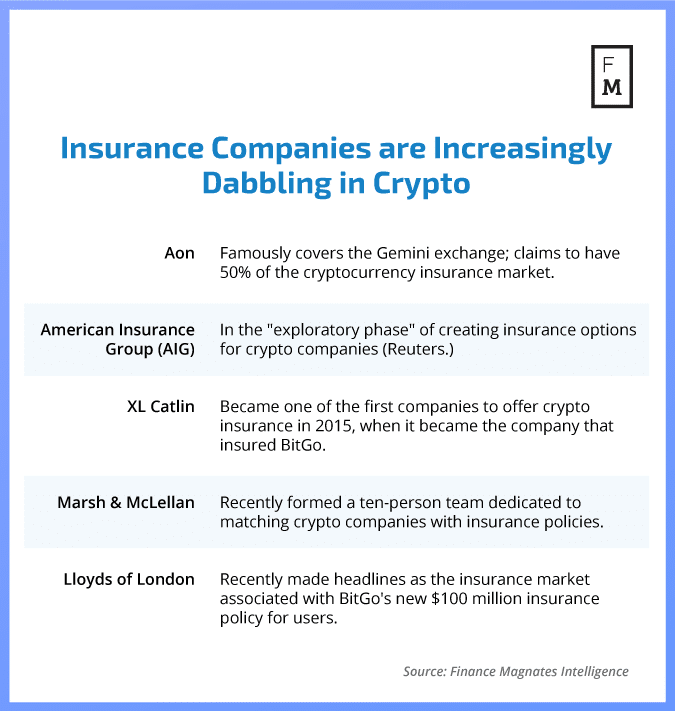 Henri Arslanian, PwC fintech & crypto leader for Asia, told Reuters that “most institutionally minded crypto firms want to buy proper insurance, and in many cases, getting adequate insurance coverage is a regulatory or legal requirement.”

“However, getting such coverage is almost impossible despite their best efforts,” he said.

And indeed, the lack of insurance in the cryptocurrency industry could be preventing a huge amount of institutional capital from flowing into the space.

Hoi Tak Leung, a senior lawyer in Ashurst’s digital economy practice, explained to Reuters that “institutional investors who are interested in investing in crypto will have various requirements, including reliable custody and risk management arrangements,” and that “insufficient insurance coverage, particularly in a volatile industry such as crypto, will be a significant impediment to greater ‘institutionalization’ of crypto investments.”

Which Crypto Insurance Companies Seem to Be Doing Things the Right Way?

Although companies and exchanges may be having a tough time obtaining crypto insurance, there are a growing number of options that are available to individuals.

One of the companies that have been in the spotlight for its cryptocurrency insurance offerings recently is BitGo, which has partnered with insurance market Lloyd’s of London to offer its users Digital Asset Services’ Theft Insurance. The policy provides up to $100 million in coverage against theft or the loss of cryptographic keys.

When the policy was launched in January, BitGo CEO Mike Belshe claimed in a statement that “this is the most complete insurance offering in the industry.”

Putting trust into digital currencies: CSO @tompageler details what BitGo’s insurance policy covers and how it’ll protect your assets in the event of an incident: https://t.co/WSB51YBJ1w #digitalcurrencies #cryptocurrency #custody

“It is not always easy for some clients to understand under what circumstances their investments are insured and to what extent their loss would be covered,” he continued. “We are changing that by being more transparent than any other company about the terms of our coverage. Transparency and accuracy is essential for building trust in the market.”

Other crypto exchanges and companies, such as Coinbase, Circle, and CGCX also insure at least a portion of their users’ funds. However, users should be sure that they truly understand the full implications of any insurance policy before putting their complete trust into it.

And indeed, a growing number of insurance companies seem to be slowly creeping towards offering cryptocurrency insurance policies.

After all, the lack of reliable policies for cryptocurrency companies could actually be viewed as a big opportunity for insurance companies who are willing to step up to the plate.

Spokesman of asset manager and Insurer Christian Weishuber told Bloomberg that “insurance for cryptocurrency storage will be a big opportunity…Digital assets are becoming more relevant, important and prevalent on the real economy and we are exploring product and coverage options in this area.”

Marsh & McLennan and Aon, two insurance brokers that assist cryptocurrency companies in finding coverage, told Bloomberg that there has been an uptick in business over the course of the last year.

For the first time, Marsh formed a team of ten staffers that is specifically dedicated to matching blockchain startups with policies; Aon streamlined its own standard policy form to speed up the underwriting process, and “tweaked general insurance policies to include crypto-specific protections.”

While both Aon and Marsh have not publicly identified their underwriters, sources familiar with the matter told Bloomberg that more than a dozen underwriters are already providing coverage to cryptocurrency-related companies.

Things Are Improving, But It’s Still a Struggle

However, despite crypto companies having greater access to crypto companies, they still struggle to find exactly what they might need. Among Aon and Marsh’s underwriters are Chubb and XL Catlin, the former of which said that it isn’t willing to cover “cryptocurrency exchanges or wallets;” the latter makes its coverage decisions on a case-by-case basis.

The result of the insurance companies’ hesitance is that crypto companies that want to truly be fully insured often have to take out multiple policies. Bloomberg reported that some cryptocurrency exchanges have been forced to work with a dozen insurers in order to make sure that their bases are covered.

Generally speaking, however, there are a couple of options available for companies who have the resource to obtain insurance. “There are two distinct insurance policies that specifically cover cryptocurrency companies (and the digital assets the company takes property of through custody),” said  Dustin Hull, Director of Financial Planning & Analysis at SALT, to Finance Magnates.

“The first of these policies is Crime Insurance, which is underwritten specifically to protect the digital assets (property) held by the company in cold storage in the event of theft or fraud.”

“The second type of policy is Cyber Liability and Technology Errors & Omissions Insurance, which protects the company entity from cyber events, technology or professional error, and multimedia liability. The combination of these two insurance policies provides the necessary coverage for asset holders and investors to ensure their assets are protected in the event that they are lost or stolen,” he explained.

However, even when cryptocurrency companies can find insurance, the cost is often exorbitant. “By some accounts, underwriters can charge a crypto-related company upwards of five times or more than your average business for coverage against loss or theft,” Bloomberg reported.

Indeed, even though BitGo has recently launched a new insurance policy for its users, the company previously dropped an insurance policy that it obtained in 2015 due to the huge expense associated with it.

Clearly, the cryptocurrency insurance industry has a long way to go–and unless insurance companies are willing to take the risks associated with offering cryptocurrency coverage, or if regulators start requiring insurance on exchanges and other crypto companies, it could take a long time to get there.