Canadian cryptocurrency exchange QuadrigaCX claimed in an announcement yesterday that it had filed for creditor protection in accordance with the Nova Scotia Supreme Court. For months, customers of QuadrigaCX have not been able to withdraw their funds from the exchange; over the same period, the exchange’s website has been out of commission for long stretches of time.

Now, when visitors attempt to access the QuadringaCX website, they are met with the two-paragraph announcement of the filing, and nothing else. 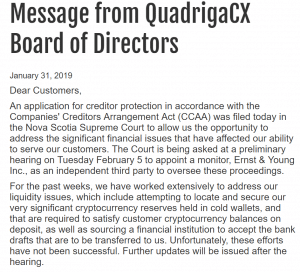 According to the announcement, the filing (if successful) will allow the exchange “the opportunity to address the significant financial issues that have affected our ability to serve our customers.” The exchange also says that it requested the court to appoint multinational professional services firm Ernst & Young Inc. as a third-party monitor.

“For the past weeks, we have worked extensively to address our liquidity issues, which include attempting to locate and secure our very significant cryptocurrency reserves held in cold wallets,” the announcement said.

Dean Skurka, vice-president of finance and compliance at Canadian cryptocurrency trading platform Bitbuy, told the Globe & Mail that even with legal support, it’s unlikely that users will see their funds again.

“These proceedings will result in a long process, which will likely result in end users experiencing significant loss,” Skurka told the publication. “There will be a long road ahead for the remaining players to regain the confidence of Canadian consumers.”

Of course, most users see all of the trappings of an exit scam: an exchange that starts to sputter and then shuts down without any real warning, never to return.

But here’s where things get strange.

There are a few things that make the situation a bit more complicated. For one thing, the exchange has stayed fairly active on its Reddit and Twitter feeds, posting updates every few days–the exchange last tweeted less than 24 hours before this article was posted.

The other, far weirder thing about this story is part of the reason the exchange claims that it doesn’t have access to its liquidity. In a statement that has since been removed from QuadrigaCX’s website, the alleged wife, Jennifer Robertson, of the man who founded the exchange, Gerald Cotten, said that Cotten had suddenly passed away while the two were on a honeymoon in India.

In any case, the QuadrigaCX reddit has turned into a wild frenzy of accusations, conspiracies, and intrigue. People are upset, and they are not being provided with the help that they need.

Please see our statement regarding the sudden passing of our @QuadrigaCoinEx founder and CEO, Gerry Cotten. A visionary leader who transformed the lives of those around him, he will be greatly
missed. https://t.co/5rvGZ2BfLV

However, there is limited evidence that Cotten did indeed pass away in India. Even if the story is true, Cotten has been quoted in the past saying that the exchange used multi-signature cold storage to hold its funds, not a single paper wallet.

Some in the QuadrigaCX community see the story as a wild attempt to cover up a much simpler (and much more believable) tale.

CoinDesk reported that some of QuadrigaCX’s problems stemmed from a since-concluded battle with the Canadian Imperial Bank of Commerce. The bank froze around $22 million–a significant portion of the exchange’s assets–last year.

Most of the funds were eventually returned to QuadrigaCX. However, Billerfly (the exchange’s payment processor) told CoinDesk that it had been unable to find a banking partner to endorse the drafts. Therefore, Billerfly was unable to transfer any fiat currency to QuadrigaCX, rendering the exchange incapable of processing withdrawals.

This tale does appear to be the truth–or at least far closer to the truth.

Got email from the CEO of Billerfy. I think it would be fine, but just takes some time. My work is done for today. SOME GUYS Please do not say I am a new account anymore… and be logical and mature when saying anything to others from r/QuadrigaCX

Before the announcement was posted on QuadrigaCX’ website, interim CEO Aaron Matthews sent an email to users saying that the exchange was hoping to process customer withdrawals within two weeks.

But then again–who is Aaron Matthews?


Something is amiss. News of the recent filing could be a sign that the exchange isn’t actually trying to pull any funny business–but until any documents showing that the filing actually happened are made public, users shouldn’t hold their breath.

Striaght up BS!
Don’t know what will happen to my ETH saved on Quadriga CX.

I had trusted my investments were gone with the demise of their owner, $20,000 of my hard earned money was gone with no

hope of getting it back. I know everybody is attempting distinctive intends to recoup funds put into Quadrigacx, it was

feasible for me with the assistance of this recovery specialist firm ASSETSCHARGEBACK @CONSULTANT ,COM, He did everything

right and just yesterday my btc was exchanged to my blockchain account. Much obliged to you Assets ChargeBack

So QuadrigaCX Pulled an Exit Scam Recently. Yes, I believe it is an exit scam. This is how most of these companies behave. I was actually part of the victims of Quadrigacx but i was able to recover my 3BTC and 8.5 LTC just yesterday. I can recommend someone to help if you are in need of your recovery. Send me an email lanagreenlady@ gmail,com. I will be more than ready to help.