Netherlands-based ING had expressed a positive, yet realistic, outlook on Bitcoin and virtual currencies in a recent edition of its eZonomics video series, which aims to educate everyday consumers in economics and finance.

The ING Group is one of the largest financial institutions in the world and has been highly successful in expanding internationally during recent years. They serve over 48 million customers in more than 40 countries, employing over 75,000. It can be considered a highly progressive bank, often being among the first to bring innovative or low-cost products to a particular region.

In the video, ING economist Teunis Brosens calls Bitcoin “a new kid in money-town.” However, real money has 3 properties: a means of exchange, a unit of account and a store of value. Bitcoin, currently, has the first attribute but lacks the latter two. It increased 10-fold within one year but has also faced multiple “speculative crises”.

While central banks regulate money supply, keeping the currency stable, once of Bitcoin’s biggest challenges is its central theme of decentralization from authority.

The imbalances between Bitcoin’s supply and demand are graphically represented to explain the inherent price instability. In fact, “fluctuations could be Bitcoin’s undoing as they complicate its adoption as real money”: 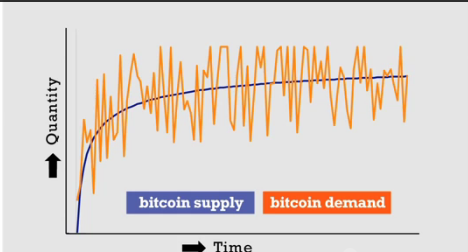 If a new algorithm were implemented that smoothly matches money supply and demand, its inventors will “make such a momentous step forward that they will surely qualify for the Nobel Prize in Economics.”