The term “black swan” event refers to a random, extremely negative occurrence for which there is no way to predict that it might happen and no precedent to predict what it might result in.

The term was popularized by former Wall Street trader Nassim Nicholas Taleb in his 2001 book, Fooled by Randomness. It has been used to describe the 2008 crash of the housing bubble in the United States (and the recession that followed it), the 9/11 attacks on the World Trade Center in 2001, the dissolution of the Soviet Union–the list goes on.

Now, the term has found a new application. A number of analysts and news sites have referred to the spread of the coronavirus and the economic cliff dive that has followed as the latest black swan to have landed in the modern world: an event that could not have been predicted, and for which there is no modern precedent.

The effect of the coronavirus has been felt on markets far and wide–and, because its effects have been so unpredictable, its effects on a number of financial markets are teaching the world that in many ways, it didn’t know what it didn’t know.

This includes the ongoing narrative in much of the cryptocurrency community, which has long slated Bitcoin as a “safe haven” asset–something that, like gold, could be turned to in times of crisis in order to protect the value of its users’ wealth.

However, the price movements that have ensued amid the ongoing spread of the coronavirus seem to tell a different story–not only for Bitcoin but for financial markets across the board.

In these uncertain times, what really constitutes a safe haven? And what will happen should the virus continue to spread?

The nature of the beast

It seems that almost nothing is safe from the reach of the coronavirus–every corner of the market has been affected in some way.

This is because the nature of the financial crisis that has resulted from the spread of the coronavirus is somewhat unique. Kehan Zhou, chief executive of investment strategy firm Wall Strategies, explained to Finance Magnates that “initially, [the spread of Coronavirus] was thought of as purely a health crisis, but the market eventually realized that the lack of production in China means that US companies are running out of inventories.”

Indeed, prior to the havoc that the outbreak has wreaked on global financial spheres, “we were in a raging bull market.,” Mr. Zhou said. This may have fueled the sell-offs that have occurred over the last several weeks: “many investors have profits that they want to protect, which led to a quick sell-off at the first sign of a recession.”

Efforts to lessen the blow of the outbreak have some had much of an effect Zhou explained: “the rate cut from the Fed was not impactful. This is because the coronavirus is a shock to the supply side of our economy not a problem with demand. People have money, and in fact, they are piling up their carts now as we speak.”

“In short, the market has been really complacent due to the bull market we were in–but now people are finally beginning to understand the implications of Corona on companies around the world.”

The week began with carnage in oil prices and stock markets

The biggest shock of the week so far came no Monday morning with the news that oil prices had crashed: Brent Crude fell over 31 percent shortly after the open on Monday morning, while West Texas Intermediate dropped 34 percent–the largest crash that had been seen since January 17th, 1991–the start of the first Gulf War.

The collapse, which was triggered by a conflict in the OPEC+ alliance following Russia’s refusal to make cuts to its production as a result of the coronavirus. Bloomberg reported that “not only will those reductions now not happen, but the current curbs will expire at the end of this quarter.”

Saudi Arabia is also “aggressively opening the taps to flood the market with cheap crude”–meaning that prices could fall even further throughout the month, and possibly beyond. As a result, prices fell to $27.34 a barrel–the lowest levels that the industry has seen since 2016.

At the same time, stock markets are continuously falling across the board. The New York Times reported that the S&P500 crashed nearly 8 percent, alleging that “the mayhem is threatening to roil the underlying global financial system and the abilities of companies large and small to survive a potential economic monsoon.” 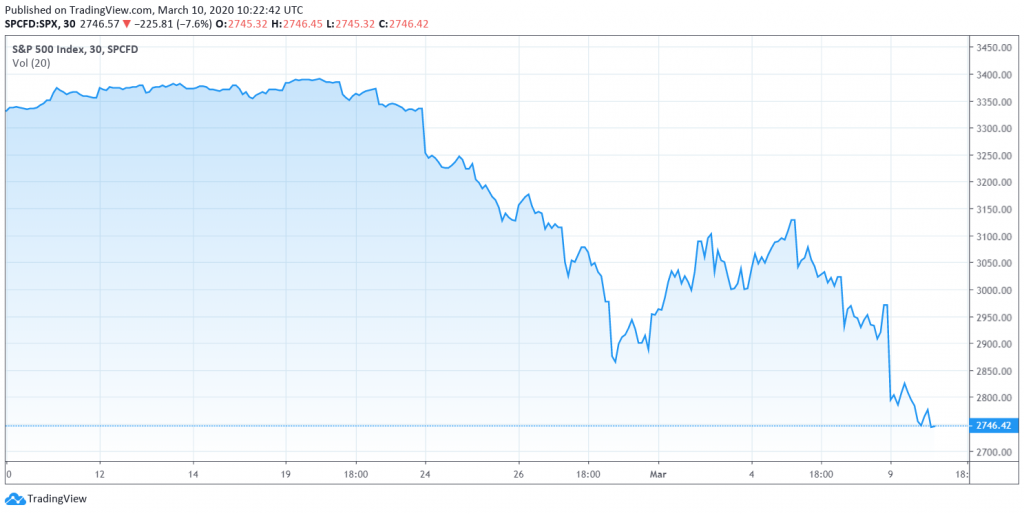 Effects on Bitcoin prices have been severe, but not as severe as in other markets

So–how has this affected Bitcoin?

“Bitcoin, while it hasn’t sold off to the same degree as some single stock equities, hasn’t demonstrated the same resilience that many commentators were expecting,” said Jon Deane, chief executive of  physical commodity digitization firm Infinigold, in an email to Finance Magnates.

Indeed, while crypto markets shed a whopping $38 billion over the weekend–starting at $263 billion at 05.00 GMT on Saturday, March 7th, to $225 billion at the same time on Monday, March 9th (a decline of roughly 14.4%)–Bitcoin wasn’t quite as deeply affected as the total market cap.

(And, notably, not as deeply affected as the price of oil.) 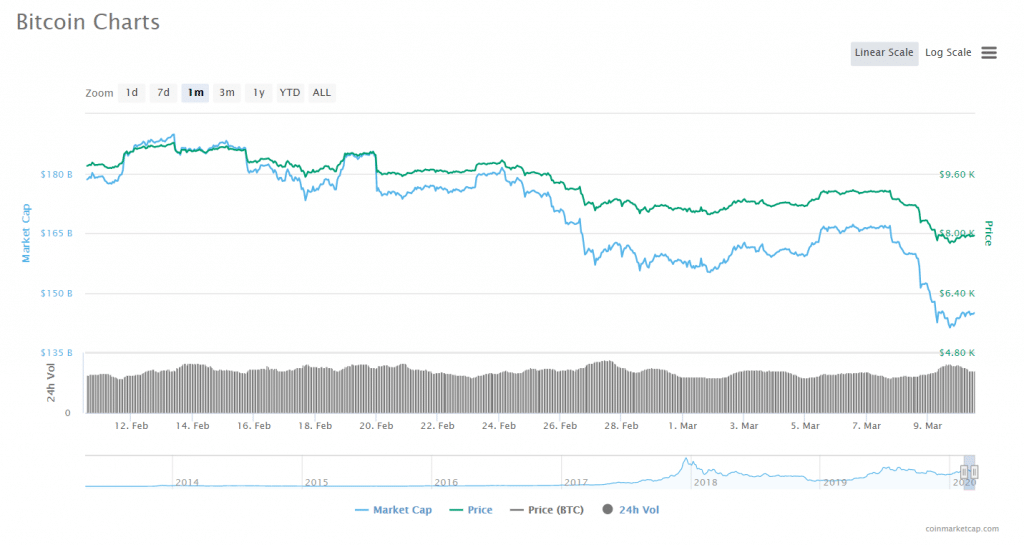 However, according to Mr. Deane, the decline in the price of Bitcoin over the weekend has revealed something important about who may have been propping the price of Bitcoin up in the first place: “Bitcoin, in my opinion, has been consumed by short term traders,” he explained.

“Technical trading dominates the price action, and until we see more investors in the space, it is difficult to envisage Bitcoin moving materially higher. Long term, this could be a negative for Bitcoin because at its core, its utility is meant to be a store of value.”

This dominance of technical traders in the space could already be on the way to change: “there are obviously a number of institutions currently building the infrastructure to originate Bitcoin interest from institutional investors, as well as the rails to facilitate transactions,” Mr. Deane said.

“Once we start to see the makeup of the market participants change, then I would anticipate the utility value of Bitcoin starting to override some of the short term trading impacts.”

”There is nothing wrong with the economy itself. Thus, like other risky assets, Bitcoins also sold off.”

Kehan Zhou also said that Bitcoin’s fall alongside other financial markets has more to do with the nature of the current sell-off at large, rather than Bitcoin’s possible usage as a true “safe haven” in times of financial crisis.

Indeed, “Bitcoin, as an alternative currency, tends to rise in value when people lose faith in the traditional financial market,” Mr. Zhou explained. “In fact, it was born as a result of the 2008 financial crisis.”

However, Mr. Zhou believes that Bitcoin also “tanked” this time because “this crisis is a result of supply chain shock. There is nothing wrong with the economy itself. Thus, like other risky assets, Bitcoins also sold off.”

In other words, the recent economic downturn–as severe as it has been–may have mostly been a reaction to what could happen rather that what has actually happened.

Indeed, Will Reeves, chief executive of Fold, told Finance Magnates that “as serious as the coronavirus is, at this point the US stock markets are reacting to the threat of the coronavirus disrupting the economy rather than reacting to an existing reality.”

But of course, there is some disruption to the global flow of goods and services: “fundraising from Chinese investors has experienced a slowdown, as their operations are tied up in the quarantine efforts,” Mr. Reeves said.

And regardless of the cause of the downturn, the outcome could be the same: “whether caused by the coronavirus or exploding national debt, or something else, another recession is incredibly likely.”

And this–this kind of true recession that would have serious consequences for the currencies of major economies–could eventually result in the widespread usage of Bitcoin as a safe haven.

After all, historically speaking, Bitcoin tends to be used as a safe haven by individuals who live in countries with failing currencies–the most famous examples of this are in Zimbabwe and Venezuela, where hyperinflation in the countries has, at times, caused Bitcoin to trade at a premium due to its popularity.

Jon Deane also told Finance Magnates that “market participants have switched quickly out of growth-related assets”, Mr. Deane explained, while “gold and US treasuries” have attracted investors who have grown weary of the doom and gloom in other financial markets.

Indeed, gold has rallied significantly over the course of the month, spiking significantly with the news of the crash in oil prices and stock markets. 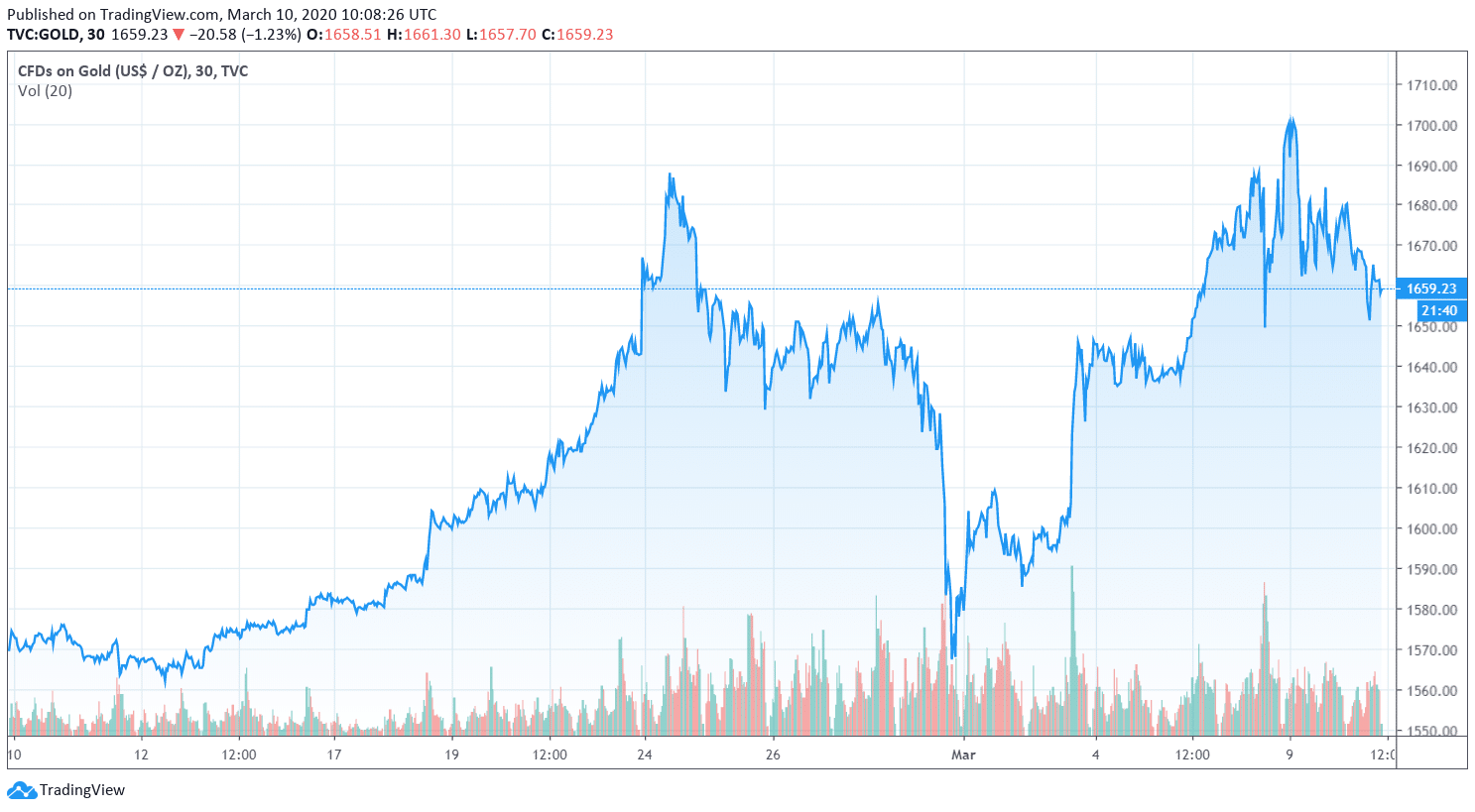 This is because the “safe havens” that investors are seeking are “something that is stable and to some degree immune from asset price volatility during periods of stress.”

In other words, Bitcoin may not become a true global safe haven until the USD and other major world currencies truly start to falter–which isn’t an impossibility.

Indeed, despite the towering global status of the almighty dollar, even it wasn’t totally unaffected by the financial cliff dives that started the week. As if shaken, the USD fell for a short time against the euro on Monday before showing signs of recovery; the USD has also fallen from a peak of nearly 0.93 against the euro earlier this month to roughly 0.88 at press time. 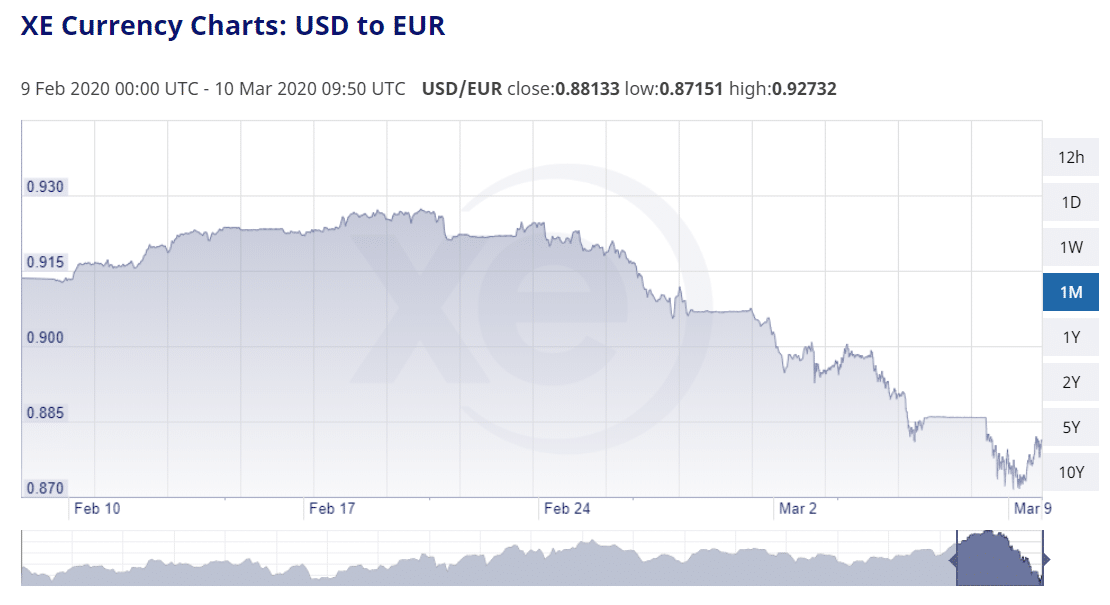 Will the drop continue? Only time will tell.