The usage and adoption of Bitcoin and other cryptocurrencies can look very different depending on where in the world you are–in countries with relatively stable economies and political situations, cryptocurrency is primarily viewed as a dangerous and risky way to make (or lose) money.

In countries with less-stable economies and political situations, however, Bitcoin can be viewed and used quite differently–in the face of political turmoil and hyperinflation, Bitcoin has been used as a way to protect the savings of individuals and communities.

Therefore, it can be argued that political and economic instability can be fuel for crypto markets. As such, when tensions rise or economies sit on the brink of collapse, crypto investors around the world watch in anticipation of a possible spike in cryptocurrency markets.

It is for this very reason that the cryptocurrency community began to keep a closer eye on events in Iran starting in early January when a US drone strike killed Iranian major general Qasem Soleimani of the Islamic Revolutionary Guard Corps. When Iran struck two US military bases in Baghdad less than a week after Soleimani’s death, the price of Bitcoin rose from $7000 to $8500.

The correlation between the US-Iran tensions and a rise in the price of BTC is also supported by data from Google Trends during the week ending on January 8th, which showed that the search term “Bitcoin Iran” had spiked twice–once on January 4th, the day after Qasem Soleimani’s death, and again on January 8th, following Iran’s attacks on US military bases. By the end of the week, searches for “Bitcoin Iran” had risen a total of roughly 4,450%.

However, a number of analysts believe that although the price of Bitcoin may have surged during the tensions, the fact that BTC has not fallen back down after the tensions eased seems to suggest that the link may not be as strong as it originally seemed.

Indeed, Andrus Steiner, Info Security Expert at ArbiSmart, told Finance Magnates that “political and regional tensions do have an impact on the stock market and can have an impact on crypto as well, but although the latest uptick…was attributed to the tension, it is not correct.” 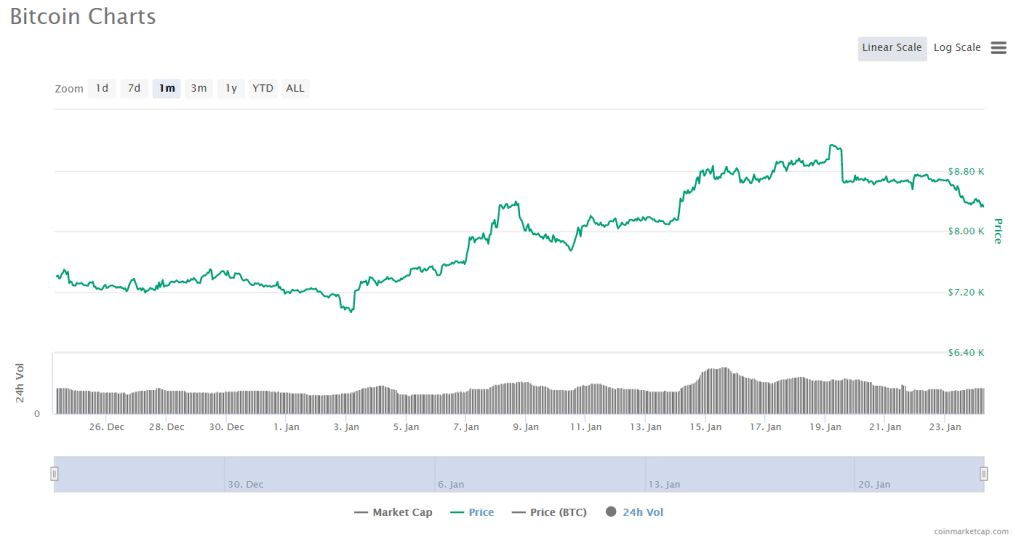 For example, the price of gold–which also spiked during the week of the tensions–fell after the tensions passed, although the price has since begun to recover.

Instead, Steiner believes that “the price increase can be attributed to the upcoming BTC mining reward halvening,” as well as “historic and organic price flows and correlations of BTC.”

Is Bitcoin a hedge for individuals in countries with unstable economies and tense political situations?

At the same time, however, Steve Ehrlich, chief executive officer and co-founder of crypto trading platform Voyager, told Finance Magnates that while “it’s difficult for anyone to guess exactly what causes Bitcoin and the crypto market to move one way or the other,” it’s also true that “historically, Bitcoin has seen price increases during times of geopolitical turmoil.”

For example, “when both ‘Brexit’ and ‘Grexit’ happened, Bitcoin went up. When China announced plans to raise tariffs on U.S. goods last year, causing the Dow to plummet, Bitcoin hit a 9-month high.”

“This month, as the fear of a war with Iran grew, Bitcoin spiked again,” Ehrlich said. Bitcoin and other types of cryptocurrency have also been embraced by individuals and communities around the world that are undergoing economic crises that have destabilized their national currencies, such as Venezuela and Turkey.

These repeated instances of upward price action that seem to come entirely or in part as consequences of political turmoil raises the question of what Bitcoin is becoming–while BTC is notoriously vulnerable, the fact that it is so easily accessible (and relatively reliable) seems to have increasingly thrust Bitcoin into the role of a “risk-off” asset, or a “hedge.”

“Many consider Bitcoin a hedge because, like gold, it tends to act independently of traditional markets and has a set supply that can’t be inflated,” Ehrlich told Finance Magnates.

I think Bitcoin just got its first successful beta test of being a war time safe haven, this is a pretty big test for Bitcoin.

And the fact that BTC is relatively unregulated by most countries around the world may present an advantage in certain circumstances: “different than gold, which in recent years has been held in large sums by banks, Bitcoin has not yet been fully embraced by financial institutions or governments, making it a potentially better safeguard against global economic turmoil.”

However, if the tensions were indeed the cause of the spike in Bitcoin’s price, it’s unclear whether the spike was the result of actual Iranians buying BTC as a way to protect their assets, or if outside investors bought BTC in anticipation of the possibility that Iranians could use Bitcoin as a hedge.

Indeed, Peter Schiff, the chief executive of Euro Pacific Capital and outspoken bitcoin critic, said via Twitter that “Heightened geopolitical risk has resulted in both gold and bitcoin moving higher, but for different reasons. Gold is being bought by investors as a safe haven. Bitcoin is being bought by speculators betting that investors will buy it as a safe haven.”

And indeed, data from Coin.Dance shows little to no movement in Bitcoin being traded in Iranian Rial markets on peer-to-peer cryptocurrency exchange LocalBitcoins.

By contrast, in June of 2019, the volume of BTC trades against Hong Kong Dollars on LocalBitcoins suddenly spiked as protests erupted, eventually hitting an all-time high in October as demonstrations escalated. 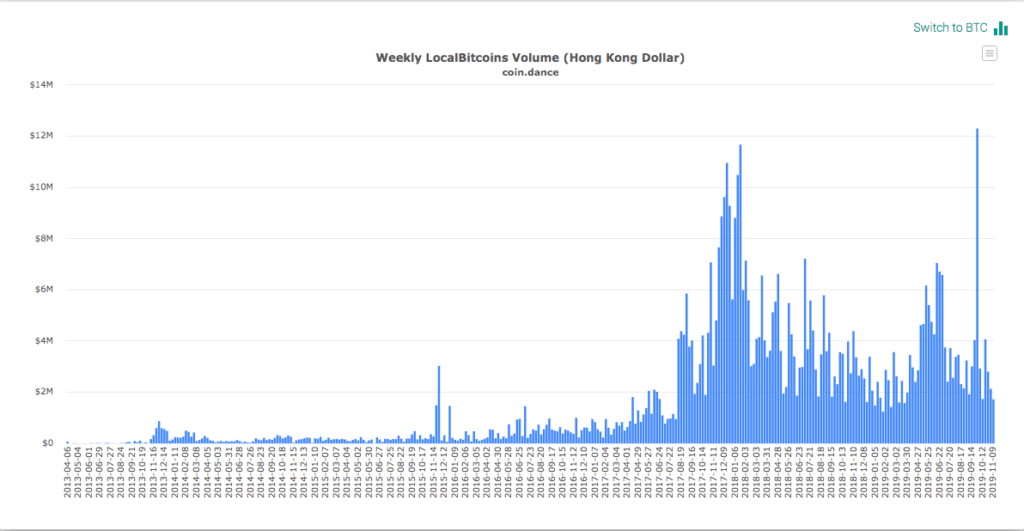 A co-founder at peer-to-peer crypto trading platforms AgoraDesk and LocalMonero, who identifies as “Alex,” told Finance Magnates that while “some Iranians use crypto,” cryptocurrency is “still relatively obscure and extremely difficult to get in the country.”

“[..] It isn’t used very widely on an internal basis,” Alex continued. “In short, some Iranians view it as a store of value and inflation hedge, especially given their lack of options due to sanctions, but apart from knowing foreigners, they have relatively few ways of getting it.”

Indeed, according to the United States Library of Congress, “the Central Bank of Iran (CBI) officially announced on April 22, 2018, that it had prohibited the handling of cryptocurrencies by all Iranian financial institutions, including banks and credit institutions. The decision also bans currency exchanges from buying and selling virtual currencies or adopting measures to facilitate or promote them.”

Last year, however, Bitcoin was reportedly more popular with Iranians due to its function as a vehicle for sending money across international borders.

Indeed, sanctions that have been placed on Iran by the United States have, in fact, caused the Iranian government itself to consider launching a blockchain-based currency of its own as a possible way to continue to operate in international markets. Azari-Jahromi, Iran’s youngest minister, told state news agency IRNA in April that there was a “digital currency in domestic development.”

Additionally, Iranian President Hassan Rouhani said in December that the Muslim world needs its own cryptocurrency to reduce reliance on the dollar and to fight American economic domination in international trade.

This is not the only instance of a government exploring the creation of a cryptocurrency as a way to evade sanctions–similar motives were attributed to Venezuelan President Nicolas Maduro’s decision to create the Petro.

Additionally, in early 2018, Sergei Glazev, an economic advisor to Russian President Vladimir Putin, said that a national cryptocurrency could “[suit] us very well for sensitive activity on behalf of the state. We can settle accounts with our counterparties all over the world with no regard for sanctions.”

However, Iran’s particular economic situation as the result of the sanctions imposed on the country could leave the nation in a particularly dire situation–which, according to Soraya Beheshti, an anthropologist with a specialization in the Middle East from Columbia University, “provides a lot of food for thought on the issue of sovereignty.”

Beheshti explained that the US’s sanctions on “are made possible by the fact that international payments are centralized through the Clearing House Interbank Payments System, or CHIPS,” explained Beheshti, who is also the founder of Karvan, an organization building blockchain-based products for displaced people.

“Despite being the gateway for international payments, CHIPS is an American institution and thereby is obliged to abide by American laws,” Beheshti went on.

“The fact that one country can oblige other countries to abide by sanctions is made possible specifically by this circumstance. There is technically nothing illegal about, say, Germany, doing business with Iran if Germany has not imposed sanctions on Iran.”

“However, because CHIPS’ international activities follow American and not international law, German banks cannot transact with Iranian ones since typically, German funds would be sent through CHIPS to whichever international bank it seeks to do business with.”

“This places the US in a unique position to unilaterally impose sanctions that, so far, have not been able to be challenged.”

Enter crypto. “Cryptocurrencies, however, offer the possibility of an alternative world view, with American institutions being moved away from the center,” Beheshti explained.

‘While this isn’t currently being instituted yet, there is a hypothetical possibility that cryptocurrencies would allow for a reorganizing of financial power that enables other countries to circumvent the centralized financial system that threatens their ability to trade with whomever they desire — in other words, their sovereignty.”

However, Iran’s plans to explore the creation of a national cryptocurrency does not seem to have been moved forward by the tensions.

And while Bitcoin’s role as a financial hedge for Iranians may be overstated in this case, its role as a possible fuel for political tensions inside and outside of Iran may be somewhat understated.

For example, the Express reported earlier this month that US cryptocurrency expert and ex-CIA analyst Yaya Fanusie warned that Iranian cyberspies could use cryptocurrency to fund information warfare against the West.

Fanusie, who currently sits as an adjunct senior fellow at the Center For A New American Security, said that “because cyberattacks are a form of asymmetric warfare with plausible deniability,” Iran could use them as a way to strike back: “crypto could play a role in that.”

He compared the possible situation in Iran with the infowar that Russia allegedly waged against the United States leading up to the 2016 election: “crypto helped Russia mount that operation, to purchase VPNs, rent computer servers, and buy domain names – it was mostly paid for in bitcoin,” he said.

“The US needs to understand information warfare is a growing part of cyber. It’s relatively easy to do a social media campaign with bots and the like,” he continued. “Crypto plays a role as you can hide your identity when purchasing these tools.”

And Bitcoin can also play a role in funding physical violence–on Sunday, January 19th, the Institute for Counterterrorism (ICT) at the Interdisciplinary Center (IDC), a private research college in Herzliya, Israel, “identified a bitcoin front for Hamas which has links to Iran,” according to The Jerusalem Post.

The report explained that the al-Nasr Brigades, which serve as the military arm of a set of various Palestinian militant organizations that operate in the Gaza Strip known as the Popular Resistance Committees, “have been funded by Iran in the past, but appear to be low on Iranian funds in the present, leading to the new bitcoin fund-raising initiative.”

The fact that cryptocurrency can be used for illicit activity doesn’t make it inherently “bad” or “evil”–rather, like any asset, the role that cryptocurrency is playing in relation to the political situation is nuanced and complex, and cannot be boiled down to any single point.

Terrorists are using bitcoin, but they aren’t the only ones. Here’s the real story about crypto usage in Palestine.

“The reality is that thieves and terrorists can profit off of anything,” said Jack Choros, Content Marketing Expert at IronMonk Solutions, to Finance Magnates, pointing to the fact that “Mexican drug cartels are currently profiting off of avocado farms.”

“The reality is almost anything can be used to harm people,” he said, just as help can come from almost any direction–including, when used responsibly, cryptocurrency.