Talk of Coronavirus’s effect on Bitcoin began earlier this year when many speculated that the virus’s rampant spread in China was part of the reason for Bitcoin’s rise: the price of BTC peaked over $10,000 through much of February.

Indeed, on February 12, Cynthia Huang, chief executive of Altcoin Fantasy, told Finance Magnates that there was a narrative being spread through the cryptosphere and beyond that “growing mistrust from Chinese [citizens] about the government due to the handling of the Coronavirus could be causing more people to move their money to what they consider safe havens,” including Bitcoin.

Indeed, analysts and speculators alike have supposed that if Coronavirus continues to spread, the price of Bitcoin will continue to increase as people move their assets from fiat currencies and other markets into BTC.

* As currencies destabilize in virus countries, Bitcoin is a safe haven

* Centrals banks may move towards quantitative easing – bullish for BTC

Even if this wasn’t the case, speculation from outside markets surrounding the outbreak might have led some to buy BTC in an attempt to make a quick profit. Renowned Bitcoin skeptic Peter Schiff pointed out a similar phenomenon on Twitter following the US-Iran tensions earlier in the year:

Even before the coronavirus, now formally known as Covid-19, Bitcoin’s role as a “safe haven” asset had been discussed since, at the beginning of the year, a short-lived bout of geopolitical tensions seemed to temporarily boost the price of BTC. A number of analysts took this as “proof” that Bitcoin’s role as a safe haven was expanding outside the limited context where it has acted as a safe haven somewhat consistently–namely, in national economies stricken by the financial crisis.

During the last week, the spread of the coronavirus has been all over the news; the virus, which had remained well-contained in China, spread throughout South Korea, Iran, Italy, and is now reaching its fingers into other parts of Europe. The New York Times reported on Thursday that “the signs were everywhere…that the epidemic shaking much of the world was being viewed with growing alarm.”

However, the spread of the virus doesn’t seem to have had the price-boosting effect that so many seemed to think it would–as news of the coronavirus’s proliferation has spread throughout the last week, BTC has come hurtling back down, stabilizing around $8,780 at press time. 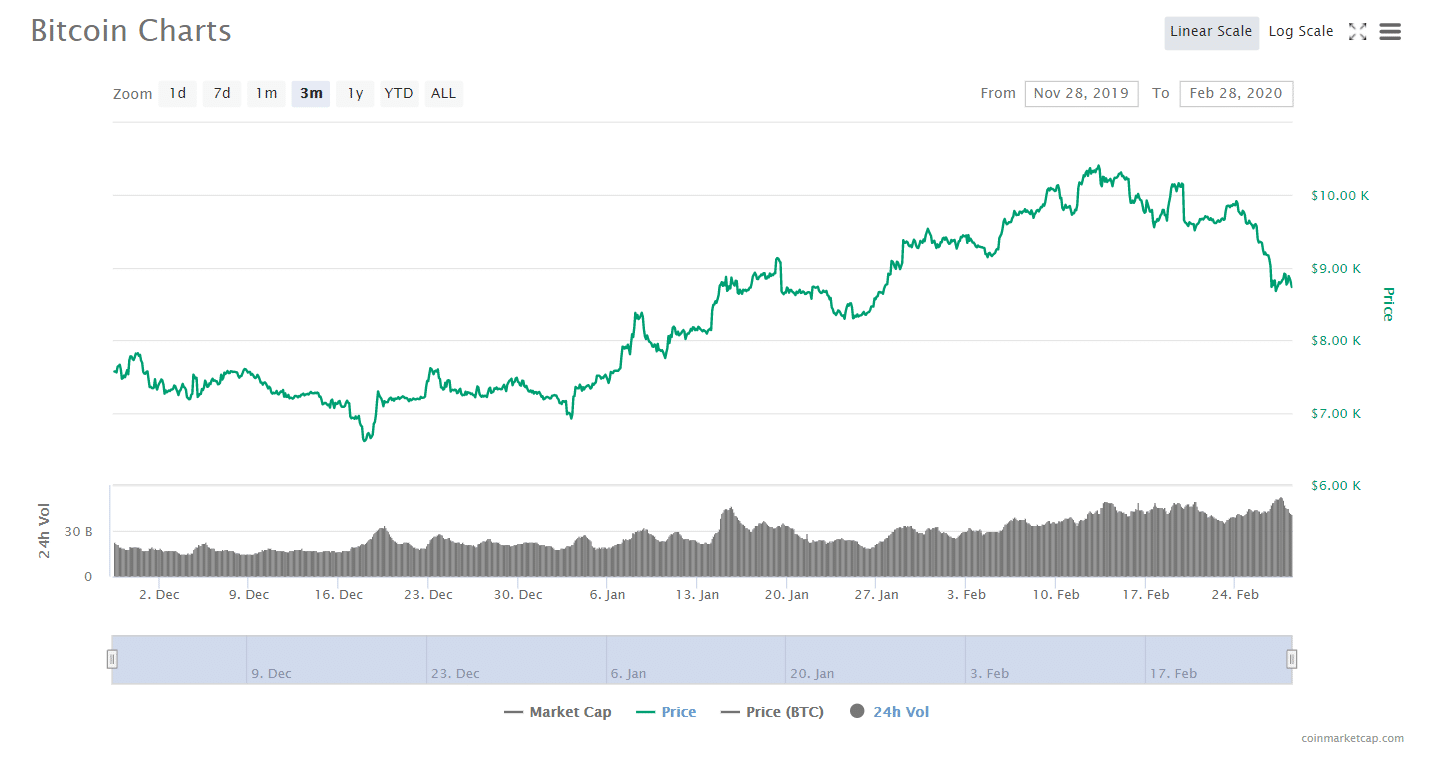 Does this destroy the “BTC as a safe haven” narrative once and for all? And how has the virus affected financial markets beyond Bitcoin?

“[Bitcoin] doesn’t yet have the scale or the institutional adoption to truly prove” its status as a safe-haven.

Indeed, “the performance of BTC over the last five days would suggest it is a risk-on asset, not risk-off,” explained Jon Deane, chief executive of physical commodity digitization firm Infinigold, in an email to Finance Magnates.

Deane compared the price of Bitcoin to the price of gold: “when people talk about gold, they generally consider it to be a risk-off asset, as over time it has been negatively correlated to the performance of global equities, and thus viewed as a safe haven.”

Still, although Deane himself believes that “BTC is a store of value,” the rest of the world doesn’t seem to view it that way: “[Bitcoin] doesn’t yet have the scale or the institutional adoption to truly prove this,’ he said.

(And, according to the total market cap of all cryptocurrencies, neither does any other coin:)

This is because “the participants in the BTC market are predominantly retail and day traders,” Deane said. “BTC was back trading around USD10,000, a critical price point, at the time the equity market started to fade, and while I would have expected in a normal market for BTC to move higher (or at a minimum retain its value), it actually sold off quite aggressively.”

“[We] don’t currently have the market composition to prove that BTC is a true store of value.”

“My view on this is that given where it was, at $10,000, and the make-up of the market, the dynamics that drive price weren’t considering [BTC as] a store of value,” he said. “On top of this, the institutional markets are not active in BTC or crypto in general. “

Therefore, “in times of stress, when traders are [re-]allocating to a store of value…they sell equities and buy gold.” However, these traders do not re-allocate into Bitcoin, because they are not active in Bitcoin markets to begin with.

“When they sell equities (or other risk-on assets), they are not buying BTC,” Deane explained. While he doesn’t believe that this will be “the case forever,” Deane also believes that “[we] don’t currently have the market composition to prove that BTC is a true store of value.”

Indeed, while the price of gold had experienced a dip in the 24 hours preceding press time, the last three months have seen a fairly consistent bull market–and a significant rise since news of the virus’s spread. 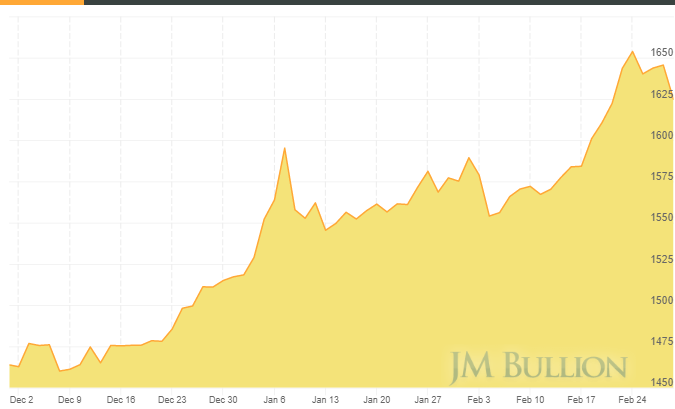 At the same time, global stock markets are plummeting–according to CNN, the “S&P 500 posted its worst day since August 18, 2011, and the three main indexes fell into correction territory”; the Dow (INDU) plummeted 1,191 points, or 4.4%, on Thursday, February 27th–its worst one-day point drop in history; the Nasdaq Composite (COMP) fell 4.6%, over 10% below its latest peak.

Indeed, the virus seems to have severely impacted financial markets in other corners of the global economy.

“Sectors that rely the most on Chinese markets, manufacturing, and global trade have been hit the hardest,” explained Joseph Yaffe, co-owner of Florida-based precious metals dealer Gainesville Coins.

“That includes tech and its crucial connection to chipmakers in South Korea and Japan. Key commodities like copper and crude oil have also seen prices slump due to the coronavirus, shuttering factories and thus depressing industrial demand.”

In China specifically, Jon Deane explained that “Covid-19 has seen the city of Wuhan in lockdown, with the Hubei province quickly following suit, until businesses, factories, shops and public life overall in the world’s second-largest economy have been impacted.”

However, while China may have been the most severely impacted by the virus, Deane said that “this isn’t a China problem.”

“China is the nexus of the world supply chain. Port and factory closures impact businesses all over the world as they scramble for other supply channels,” he continued. “A lot of the time, businesses won’t find available capacity and will either have to cancel orders or delay shipment.”

Indeed, CNBC reported that “as business activity and transportation have been restricted in many Chinese cities, companies unable to fulfill contractual obligations are applying for force majeure certificates issued by China’s Council for the Promotion of International Trade.” The certificates allow companies to avoid paying penalties for late or missed deliveries due to forces beyond their control; 1.615 of the certificates (worth 109.9 billion Chinese yuan, or $15.8 billion) had been issued by the end of January.

Impact on travel and tourism–and, thereby, fintech and crypto

The virus’s continued spread outside of China has also directly impacted other industries, including tourism and, as a result, private enterprise.

“Tourism is another industry that will be heavily impacted by the coronavirus,” Jon Deane said to Finance Magnates. “As travelers cancel trips, flights, and tours due to the increased risk of coronavirus from confined spaces. The impact of this is felt in the tourism towns, airlines and the energy industry that supplies them, as well as the numerous other industries that have enabled globalization.”

Indeed, The New York Times reported that “some economists say the epidemic could be the biggest drag on global economic growth since the financial crisis, with airlines alone expected to lose some $29 billion in revenues this year.”

As such, sectors that rely heavily on travel have also been impacted–including, notably, the cryptocurrency and fintech industries, though the exact impact of the coronavirus on business operations in these industries is unknown.

Thirty-three people have tested positive for the coronavirus in California, more than any other state, and at least 8,400 people who have returned from overseas are being monitored https://t.co/FRVCcNUJbi

“This [also] impacts the micro-economies around these central business districts, from the local restaurants, taxi companies to gyms that service a large percentage of the population that call cities home.”

The impact of the coronavirus on global markets has also been affected by several important pre-existing conditions in the economy.

“The timing of coronavirus is also quite critical when considering the impact on global GDP,” Deane said.

Despite the acceleration of the virus during the Chinese New Year, a factor “which further domestically impacts China’s growth,” Deane pointed out that the virus “came at a time of slowing global growth (excluding the US) and when equity valuations and multiples were at all-time highs.

The U.S. stock market was priced for perfection and didn't get it. It is way overvalued and a bear market is long overdue. The #Coronavirus is merely the straw that broke the market’s back. Now that its broken collapses is inevitable, regardless of what happens with the virus.

As such, the growing impact of the coronavirus “could dramatically impact global growth for the foreseeable future,” he said. “The impact of slowing global GDP is lower equity valuations, as the equity market is predominantly forward-looking. If traders don’t believe that growth is around the corner, then I’d anticipate a transition from growth stocks to income-generating hard assets.”

Still, Deane “expect[s] global central banks to try and respond, to smooth the economic impact of coronavirus over the coming days and weeks. However, whether they can do this is another question.”

This is particularly true because the full extent of the virus’s spread is still unknown. “Pandemic conditions would very likely lead to a global recession,” Joseph Yaffe said. “Even a fairly brief collapse in trade, industrial output, and general commerce would be recessionary because the world economy is so interconnected.”

As such, “the effect would be a dramatic downward correction (20% to 40%) in stock prices given that current valuations on Wall Street are based on the assumption that the economy will continue to grow by 2% to 3% this year,” he said. “A potential period of economic contraction is not at all priced into equity values right now.”

“ It’s unclear how strongly cryptos will appeal as safe havens in a full-blown pandemic,” Yaffe said. “My sense is that prices will fall amid a sustained panic, but less so than the broader markets. The major cryptos like Bitcoin and Ethereum will likely fare the best; many vulnerable altcoins and related projects [will likely] end up folding in a painful financial downturn.”

What do you think the long-term effects of the coronavirus will be on Bitcoin and other financial markets? Let us know your thoughts in the comments below.