ASKfm, a Riga-based social networking company with 215 million users spread over more than 100 countries, has been planning an ICO. It will be selling 2 billion ASKT tokens, but 500,000 of them are at the top of Mount Everest.

The company announced via a YouTube video that four “crypto enthusiasts” had climbed the mountain and buried a hardware wallet at the summit. In the video, one of the climbers invites users to retrieve the wallet if they can. The value of the tokens at the summit is estimated by the company to be $50,000, according to the Financial Times. The company bases the figure on the pre-sale and ICO which have not yet begun.

The company explained the stunt in a press release: “While others try sophisticated marketing techniques, these guys go out there and put themselves right on top of the tallest mountain on the planet. An elegant way to boast ideological superiority to every other crypto. A method unexplored before. Even meme-wise, think about the closest starting point to reach the moon. It seems so obvious. Yet no one has done it.”

However, its claim of ideological superiority has been left open to doubt as it transpires that the team left one of their Sherpa guides behind to die, and they don’t seem too bothered by it.

Lam Babu Sherpa was a 45-year-old Sherpa who was guiding the team of Ukrainians. According to 4sport.ua, the cause of death was unclear – one version says that he slipped off the trail due to snow blindness, and another says that he became exhausted after misjudging his strength.

It also says that information regarding the disappearance of the guide was known at base camp on the 14th of May, during the trek, but not known to the climbers “until the last moment.”

ASKfm said in a press release: “Of course, there were issues… two guys were stuck at above 7,000 meters with no reserve oxygen for all of that time. Under extreme temperatures and unable to descend, they had during the second day to call for a helicopter squad to rescue. Now they’re both safe and receiving treatment. And strong having made such a move.”

One of the climbers, Taras Pozdnii, said: “At the top of Everest the weather was very bad, and then we were coming down. We were going down to Camp 4, which is at about 7900m, and one Sherpa was dying. That’s all we know. My Sherpa coming. The last time I saw Dima’s Sherpa was at the top of Everest. He [the Sherpa] was behind us so we don’t know what happened to him. We were going fast and the Sherpa wasn’t coming with us. He was coming behind so we didn’t see him.”

According to a blog by mountaineering consultant Alan Arnette, it is “hard to understand” how an experienced Sherpa was “staggering” with snow blindness, and nobody could have helped him.

The promotional video is still up. In it, ASKfm 2.0 invites users to “Get ready for the highest token. Literally.”

Although official statistics vary, an estimated 300 people have died while attempting to climb the mountain – the last year without a fatality was 1977, according to Everest History. Approximately one-third of the deaths are the Nepalese guides whom adventurers need to successfully make the climb.

The FT asked Podznii about his trip. He replied: “It was very nice. It was the best trip of my life.” 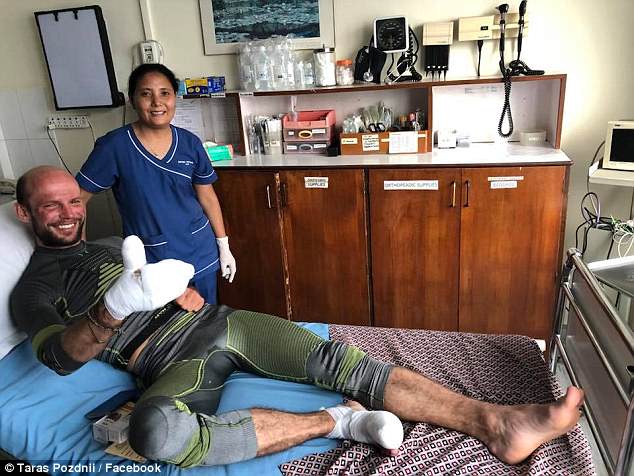