Litecoin loyal are being urged to get out of the Coinotron mining pool, which has been hovering precariously close to generating 51% of the network’s hashing power.

Coinotron is a multicoin mining pool catering to Litecoin, Dogecoin, Vertcoin and others.

At such a level, the pool can technically function as the “majority” of the network, allowing it to double spend its own transactions or deny others from transacting. While it has been argued that the benefits enjoyed by the attackers are marginal, this doesn’t rule out the harm they can cause with malicious intent.

The issue was first raised around 11 days ago when Coinotron’s share grew to 48%. It can be explored in detail on the litecointalk forum. Between now and then, the value fluctuated between 40% and 50%, and two days ago, indeed hit 51% for a brief period.

Some have also pointed out that even at 40%, the aforementioned risk exists, just that the pool has only a 50% chance of successfully executing such schemes. 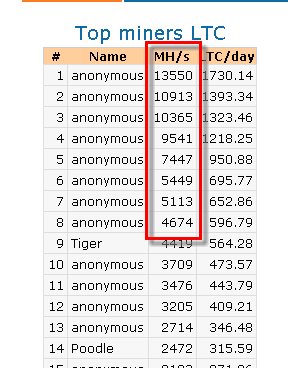 Some are alleging that Coinotron is impervious to the activities taking place on its platform and do not care to intervene. Others are taking it a step further and think Coinotron is deliberately trying to undermine Litecoin and/or fork the chain, linking the large “Anonymous” users to the pool operators.

Some of the more rebellious commenters on the litecoin subreddit are cheering for 51%, since “this will teach everyone to reconsider proof of work system.”

Indeed, such scares are not found with coins employing proof-of-stake algorithms, such as Peercoin.

Debate has been reignited as to if/how Litecoin should change its proof of work (POW) algorithm in order to get abusive or otherwise dominating mining powers, such as those employing ASIC, out of the game. Several weeks ago, Litecoin founder Charlie Lee rebuffed calls for change, arguing the risks outweigh the benefits.

Litecoin was also subject to other mining woes back in January when users of the Give Me Coins mining pool reported theft of their coins. That pool currently generates about 4% of the network’s hashing power.

Litecoinpool.org has a tool that estimates litecoin pool mining hashing distribution based on the rate at which blocks are solved. Monitoring the site, Coinotron’s share now stands at 48%. The total hashing power of the network is roughly 212 gigahash per second (GHS). 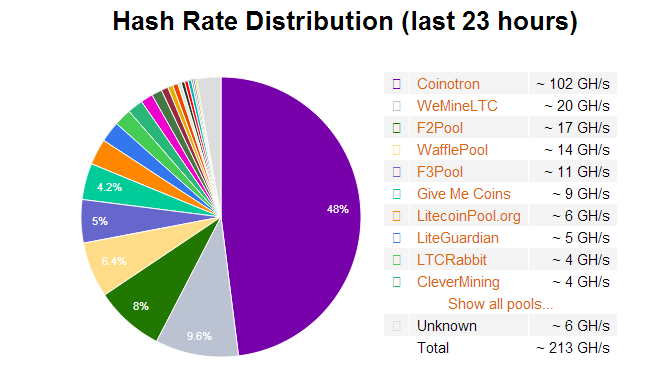 Share this article
Tags: Asic / litecoin
Got a news tip? Let Us Know

Here’s a new LTC pool to use:
http://ltc.cryptoculture.net/index.php?page=register