Charlie Shrem had been scheduled to speak for yesterday’s 2:30 pm slot at the Bitcoin in the Beltway conference in Washington, D.C. on a busy day that also featured Patrick Byrne as keynote speaker.

He had been reportedly granted clearance from authorities to attend, which would be an exception even under his recently relaxed terms of house arrest, which confined him to the five boroughs of New York and subject to GPS tracking. He was reportedly able to attend the Bitcoin Fair in New York and even pilot Holiday Inn’s integration of Bitcoin payments.

However, according to conference organizer Jason King, his permission was revoked at the last minute. At this point, it’s not clear if this had to do with technicalities related to house arrest, or if authorities were more concerned about his presence at such a conference. In March, while still under full house arrest, he addressed the Texas Bitcoin Conference remotely, to much fanfare.

You can still see Charlie listed as one of the speakers on the conference website, which states his company as “Bitinstant” and describes him as follows: “Charlie is an American businessman and entrepreneur. He is co-founder and CEO of the Bitcoin startup company BitInstant and currently Vice Chairman of the Bitcoin Foundation.” 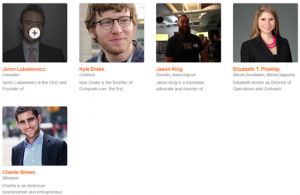 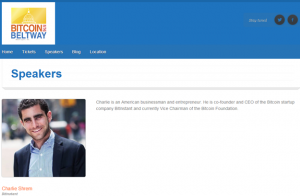 Shrem had been arrested in January and was charged with money laundering and operating an unlicensed money transmitting business. It is alleged that he conspired to funnel over $1 million worth of bitcoins to users of Silk Road.

His slot was replaced with “Open Bazaar: The Distributed Anonymous Marketplace” by Brian Hoffman. The marketplace claims to grant everyone the “freedom to exchange directly with each other”, just like in the old days without middlemen or governments telling you what to do.