Charlie Shrem, who was recently granted relaxed terms of house arrest, will be piloting Bitcoin as a form of payment at the Holiday Inn in his home borough of Brooklyn. The program is to commence later this week.

Talking to newsBTC, Shrem said that location was chosen because it caters to European tourists. European credit cards charge double the fees and have a higher risk of chargeback. He also said that the hotel plans on preserving a portion of the bitcoins it receives with the remainder converted to fiat to cover costs.

If successful, the payment method will be expanded to other locations as well. On reddit, Shrem elaborates:

“The plan here is to integrate it with 1 pilot location and if goes smoothly, roll it out across the rest of them. Integration is done, and Ill be at the location tomorrow testing. Ill tweet with more updates and pictures.”

Shrem originally announced the plans at the Bitcoin Fair in New York, saying that he will be leading the initiative. He also tweeted: 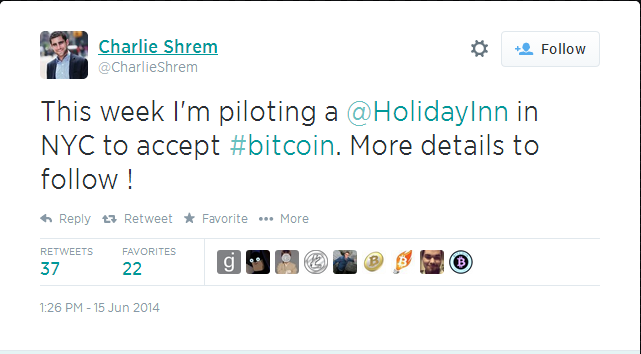 The timing of the launch works out well. Last week, Expedia announced that they too will begin accepting Bitcoin for hotel bookings.

Indeed, Shrem’s relaxed terms of house arrest were granted in order for him to pursue employment. Whether or not this is what they had in mind, his fans on reddit are loving it.