The Central Bank of the Bahamas has become the latest national financial institution to launch a state-backed digital currency. The so-called ‘Sand Dollar’, pegged to the Bahamian dollar (which is pegged to the USD), is now available to all 393,000 Bahamian residents. While a number of countries around the globe have taken steps toward issuing central bank digital currencies (CBDCs) in the past, the Bahamas may be the first country to have successfully launched a completed CBDC.

The announcement of the new digital currency came in an October 20th Facebook post from ‘Project Sand Dollar’. The digital currency can be sent and received via a mobile phone application, and can be used at any merchant “with a Central Bank approved e-Wallet on their mobile device.” 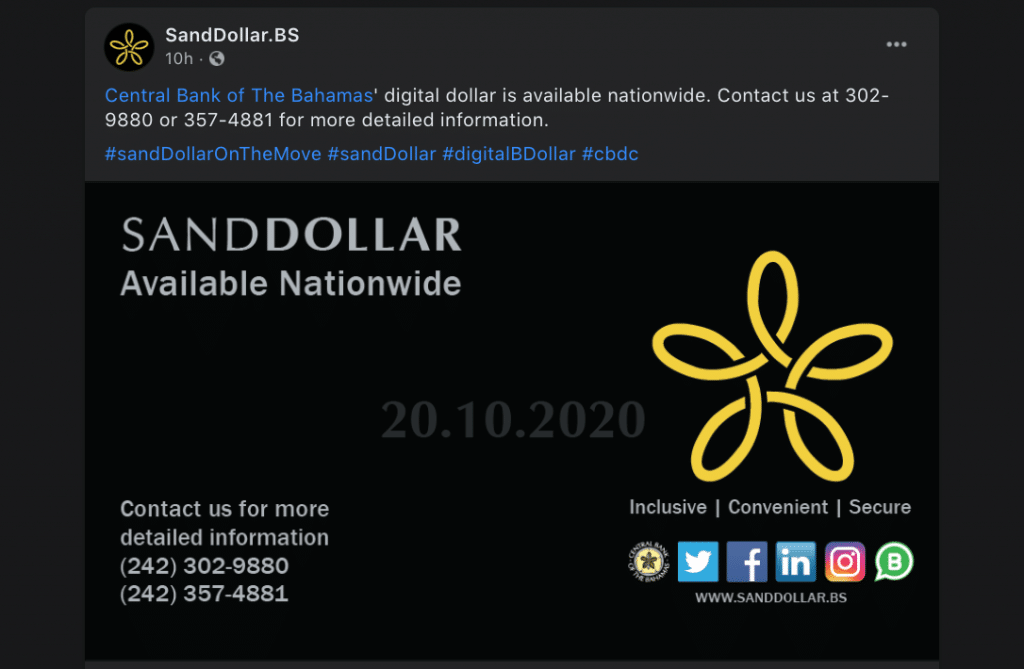 The Sand Dollar is intended to promote financial inclusion throughout the Caribbean archipelago region, which is compromised of more than 700 islands, of which more than 30 are inhabited.

The official website of the project says that Sand Dollar transaction fees are ‘negligible’. The project was launched in partnership with decentralized wireless payment systems, NZIA, which acted as the technology solutions provider for the rollout of the digital currency.

According to a report by CoinTelegraph, the Bahamian central bank has been preparing to launch its own central bank digital currency (CBDC) for several years.

The bank launched a pilot program in 2019, issuing 48,000 Sand Sollars on the islands of Exuma and Abaco, which have a combined population of less than 25,000 people.

The ‘Sand Dollar’ joins a growing number of digital currency projects to have emerged from financial institutions in the Caribbean region.

Last year, The Eastern Caribbean Central Bank (ECCB) launched its own digital currency project, the DXCDCaribe pilot. The name of the project, DXCD, combines ‘D’ (representing the word ‘digital’) with ‘XCD’ – the international currency code for the Eastern Caribbean dollar. The pilot involved a digital version of the EC dollar, dubbed ‘DCash’.

At the time of the project’s launch, the ECCB said that “DCash will be issued by the ECCB, and distributed by the licensed bank and non-bank financial institutions in the Eastern Caribbean Currency Union (ECCU). It will be used for financial transactions between consumers and merchants, people-to-people (P2P) transactions, all using smart devices.”

A number of CBDC projects are also being developed in other nations. Perhaps most notable is China’s digital yuan, which is currently being tested.