In late 2017 and early 2018, national stablecoins were the talk of the industry. Rumors – some confirmed, some unconfirmed – that Estonia, Sweden, Iran, Russia, Venezuela, and others may be exploring the launch of a national stablecoin spread like wildfire. 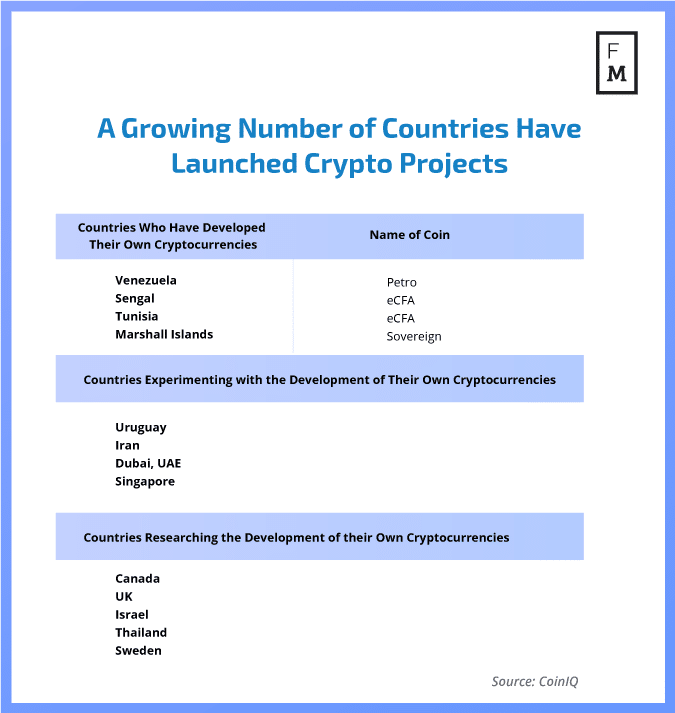 How have these projects evolved over the last year? And how have they influenced the world’s view of cryptocurrency?

Whatever Happened with the Petro?

Perhaps the most infamous example of a national cryptocurrency gone wrong is the Venezuelan Petro. The Petro, a cryptocurrency that is allegedly backed by oil and other commodities, was launched by President Nicholas Maduro as a possible solution to the country’s financial crisis. Hyperinflation has struck the nation’s economy so severely that in the worst of times, a loaf of bread costs close to 500,000 Bolivars.

At the launch of the Petro, the Venezuelan government is alleged to have allocated five billion barrels of oil to it. Each single Petro coin was worth one barrel. The government said that the Petro would be “a second accounting unit of the Republic and will begin operations as a mandatory accounting unit of our PDVSA oil industry.”

“The new Bolivar with five zeroes dropped is not “anchored” (to the #petro #fraud crypto) as #maduro said). It is rather attached to an ANVIL amd will sink faster.” No policies against #hyperinflation but more petrol for the fire. https://t.co/J6FjHsp01A

Preceding the launch of the Petro, the Venezuelan government came under fire from other government bodies around the world, which accused the country of developing the Petro as a way to evade sanctions and access international debt markets. Some governments even barred their own citizens from taking part in the Petro’s token sale.

Almost immediately after the launch of the Petro, accusations emerged that Maduro and his associates were directly involved in a huge money-laundering scheme with the Petro at the center of it. More specifically, the allegations were made in connection with the $735 million that was raised within hours after the Petro went public.

Unfortunately, the allegations were eventually proven to be true. A Latin American exchange firm that conducted a technical audit of the Petro discovered that exactly none of the funds that were allegedly pumped into the Petro project ever actually existed on the blockchain. Additionally, a number of companies that Maduro had named as participants in the project either never existed or denied their involvement entirely.

“The mention of agreements with the ghost company ‘Aerotrading’, does not figure in the [Petro’s] ecosystem of development and neither on the internet,” a report by the company read (translated from Spanish.) “In addition, the Zeus company dissociates itself from the agreements made, while the Venezuelan government is still naming the companies and the NEM foundation as the parties directly responsible for the integration of the Token [Petro].”

Suspicions were raised even higher when a Reuter’s investigation conducted in August of 2018 revealed that the man who had been named as Venezuela’s Superintendent of Cryptocurrencies did not have an industry in the Ministry of Finance and that the office’s promoted website did not exist. Ataparire, the parish where the project’s oil reserves were supposedly based, had seen no oil-related activity; oil rigs found in the area appeared to have lain abandoned for some time.

Additionally, Reuters could not identify any actual human being that had been able to buy the petro at all. In the end, it seems that the project was one giant lie.

As you can perhaps imagine, this did not do wonders for the cryptocurrency industry. Most of the public saw yet another example of cryptocurrency being linked with illicit activity. However, the debacle did serve as a learning experience for governments interested in learning how to better regulate their own interactions with cryptocurrency projects.

The US Fights Against the Iranian ‘PayMon’

Another national cryptocurrency project that has garnered quite a bit of negative attention is the Iranian PayMon, a digital currency that would be backed by national reserves of gold. Similar to the Petro, the project has been criticized for having been developed as a method of evading international sanctions.

Anticipating these, US lawmakers introduced a bill due impose further sanctions that would hinder the development and use of the PayMon. The “Blocking Iran Illicit Finance Act,” which was published in late 2018, would place sanctions on foreign individuals who are involved in the transfer, holding, sale, or supply of the PayMon.

#Iran‘s economy has been creaking badly under the reimposed US sanctions, which were activated in H2/2018; the #PayMon is one of those innovations borne of dire circumstances

The act also requests that a comprehensive report on the project be made to Congress. A similar bill was introduced by Ted Cruz around the same time.

According to a report from CoinTelegraph, cryptocurrencies have already been widely used by Iranians who are seeking to evade sanctions. Additionally, crypto and blockchain technology have been eyed as an alternative to the SWIFT financial messaging services, as a number of Iranian banks have been forcibly removed from the SWIFT system.

Iran’s crypto-rial has sparked controversies. While the gold-backed “PayMon” can be used to invest in the country, critics suggest that #Iran is trying to evade U.S sanctions. The question now is: does it have a future? #paymon #cryptocurrency #CryptoNews https://t.co/8iUpww5vD0

So, Iran is in a tight spot. A sovereign cryptocurrency could indeed improve the country’s own financial services–a problem that is particularly acute due to the absence of SWIFT from some of its banks. However, its financial and political situations could worsen more generally if the countries pursues the creation of the PayMon any further.

Governments Could Reduce Crime and Increase Efficiency With their Own Cryptocurrencies

Despite the mixed results of the national cryptocurrency projects that have appeared over the course of the last two years, many analysts believe that a growing number of countries will eventually have some kind of cryptocurrency or blockchain-based system within their financial infrastructure.

In fact, Christine Lagarde, head of the International Monetary Fund (IMF), recently endorsed the concept of national cryptocurrencies in order to prevent systems like the Bitcoin network from becoming havens for money-launderers and other kinds of criminals.

Lagarde also said that integrating regulated cryptocurrency and blockchain systems into national banks could greatly increase efficiency and lower costs. “The advantage is clear. Your payment would be immediate, safe, cheap, and potentially semi-anonymous,” she explained, speaking at a fintech conference in Singapore last year.

“And central banks would retain a sure footing in payments. In addition, they would offer a more level playing field for competition, and a platform for innovation. Meanwhile, your bank or fellow entrepreneurs would have ensured a friendly user experience based on the latest technologies,” she continued.

“Putting it another way. The central bank focuses on its comparative advantage – back-end settlement – and financial institutions and start-ups are free to focus on what they do best – client interface and innovation. This is [a] public-private partnership at its best.”

One country that is working on developing a blockchain-based system that could improve its own banking services is Thailand. The Thai central bank, along with eight other Thai financial institutions, teamed up in August to create a cryptocurrency to be used between banks. The announcement of the coin is meant to “enhance the efficiency of the Thai financial market infrastructure.”

After the interbank cryptocurrency system is established, the project is set to expand into cross-border transactions. “Building upon the findings and outcomes from Phase 1, the project participants aim to further develop the capabilities of the prototype for broader functions including third party funds transfer and cross-border funds transfer,” the announcement explained. No public news of the project has emerged since its launch.

A number of similar projects have emerged–projects that appear to be well-regulated and created with the intent to operate in line with international sanctions.

Tunisia has developed a transaction platform that would also serve as a digital ID; it would be used for salary transfers, loans, and bill payments. Sweden is creating the ‘e-krona’ – among other use-cases, the e-krona is set to be used by asylum seekers as a verifiable and secure method of transaction. A similar platform is being developed by Finnish company MONI in collaboration with the Finnish government.

It’s unclear when any of these projects will come to fruition. However, what’s clear is that the speculation around these projects has increased, so too has the apparent need for international regulations and infrastructure that would allow these cryptocurrencies to function on a legal scale.