When it comes to decentralization on exchanges in the cryptocurrency space, there are still a lot of questions that need to be answered.

To get the answers to these questions, Finance Magnates sat down with Fabio Canesin, co-founder of cryptocurrency trading firm Nash and founder of the City of Zion (CoZ) open-source community.

Canesin will also appear as a speaker at the upcoming Finance Magnates Barcelona Trading Conference on July 10th & 11th. To learn more about the conference, click the image below. 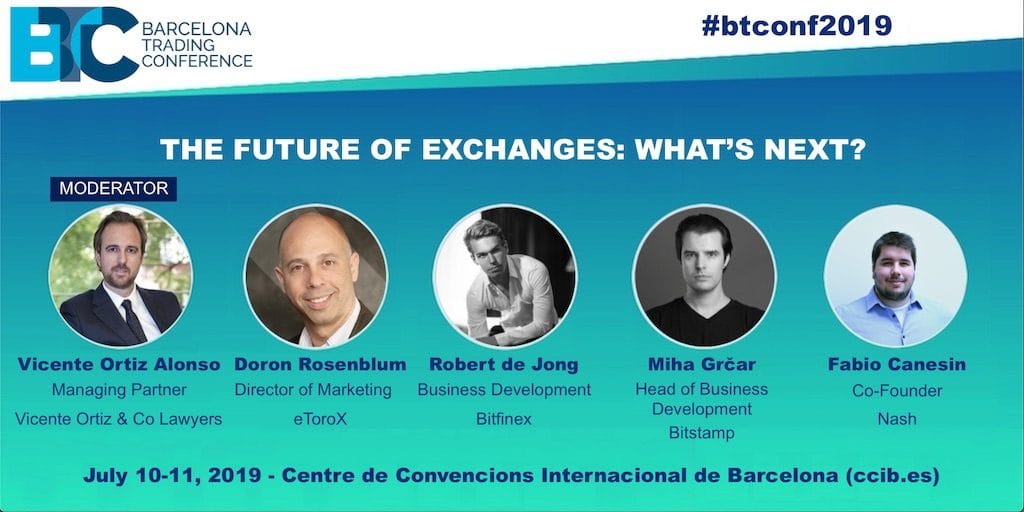 “Nash is a fintech that uses blockchain,” Canesin explained. “Basically, the idea is that finance is becoming digital–people are giving up their more traditional banking infrastructure to have mobile-banking and web-based banking only.”

Canesin added that this is a global phenomenon–”[it’s] not only Europe or the US.”

He explained that the idea of Nash is to make the circle more complete. Because banking is becoming almost purely digital, Nash is working to digitalize the assets that are stored by banks.

“If you look around at which type of technologies are more suitable to finance, blockchain is the obvious candidate,” he said, adding that he believes that currencies, futures, and other kinds of assets will all eventually migrate onto a blockchain.

According to Canesin, Nash has essentially looked into this blockchain-based future and tried to design services that will be used.

“The first one (that already has a business case) is an exchange. People can trade the investments that they already have or invest in new kinds of assets.”

We’re changing our name: NEX is now Nash! The NEX token will retain its ticker, representing the name Nash Exchange. Learn about how we’ve developed our brand in this interview with our Marketing and Design teams: https://t.co/PGA1x5HaVO

Additionally, Nash has launched a fund management tool. Canesin explained that Nash is working to make the platform as similar to other online finance systems that people may already be used to using: “you enter onto the website and you see all of your assets–that’s what we are aiming for.”

“And this is completely self-custodial,” he continued. “We don’t control any of the funds–the user has full control of their funds.”

Self-custodianship of digital assets is also a feature of Nash’s decentralized exchange.

Because of this, Canesin said that Nash built a platform where you can buy and sell crypto for fiat a “sidecar” to the exchange. This aspect of the business relies on third-party platforms that want to integrate into Nash–”so, basically, a business can plug into our business and provide their services through our interface.”

Because Nash’ exchange is decentralized, we asked Canesin about his views on the role that decentralized exchanges will play in the future. He explained that when speaking about decentralization on exchanges, there are two important factors that need to be spoken about separately: custody and compliance.

“I think that the problem with custody is not how the trade itself happens,” Canesin said. “So I believe that there will always be a level of centralization because you need that for compliance. So, for a business to comply with anti-money laundering (AML) laws, you need authorization–you need to [decide] who trades [and who doesn’t.”

“So I believe that this [layer of centralization] will always be there,” even on a decentralized exchange.

Nash as a company “[believes] very much that these kinds of [measures] are very needed,” he said. “As someone who grew up in Brazil, you learn that anti-money laundering laws are sometimes the only tools that prosecutors have to go after corruption and other kinds of problems that happen across the board.”

“So, I do think that this is very important, and we are going to be very compliant in that sense.”

Canesin explained that the various levels of AML measures and know-your-customer (KYC) checks are based on volume; essentially, the more a customer trades, the more intensive the KYC checks.

”A strong movement toward self-custody”

However, “in terms of custody, I do think that we’ll have a strong movement toward self-custody. If not self-custody, the custody of the asset will not be on the exchange side.”

For example, “if you are an institutional investor, you[would] have a contract with a professional custodian–so, people like BitGo, for example.”

Beyond that, the custody of the assets should be decided by the customer–”there are different needs for different users,” Canesin said.

“On the individual level (retail investors), I do think that [each individual] will control their funds. But as we grow into institutional-sized investors, I think they will have a third-party that handles [custody].”

Self-custody is a fundamental requirement for decentralization of finance. https://t.co/z3JR1cKy0t

However, “if [the exchange] has a security breach or the company has an internal problem, it’s all on them. But as we move to a more compliant and professional setup, I do think this will change.”

After all, this is how most traditional asset exchanges currently operate. “If you trade today on the NY Stock Exchange or on Nasdaq, they don’t have custody of the assets– there is a third party, a centralized custodian that holds the assets.”

“So, this is basically how the world used to work before. And what we are doing is building this infrastructure using new technology.”

”A lot of things that people consider to be ‘truth’ are changing very fast.”

Regulations in the cryptocurrency industry are a particularly hot topic because of the dawn of Facebook’s Libra cryptocurrency project. But long before Libra came around, regulators have been working with cryptocurrency businesses to help forge a path forward in creating regulations that both support the industry and keep users safe.

However, there is some concern within the crypto industry that regulators who don’t fully understand the needs of the industry will create inappropriate and ineffective laws to control it. However, Canesin said that this concern isn’t always valid, though of course, “it depends on the regulators.”

But “when we talk about regulating bodies–that’s usually hundreds of people or dozens of people, so the information is inside the body.”

“The problem is that the space itself is moving so fast, that a lot of things that people consider to be ‘truth’ are changing very fast [as well],” he said.

“When you think about all of the complexities that arise from the [technological] possibilities [of the industry], it becomes really hard for regulators to tell how to make a blanket regulation for this fast-moving space.”

“So, I think it’s still too soon to regulate the industry in a strong sense. We can start talking about possibilities, we can start to see how they would be implemented in practice–but I think we’re still very much in the sandbox stage, and we will be there for a few years.”

This is an excerpt. To hear Finance Magnates’ full interview with Fabio Canesin, click the Soundcloud or Youtube links.