This is an excerpt and the second in a series of two. To read the first excerpt, click here. To hear the full interview, click the Soundcloud and Youtube links.

Blockchain technology has enabled the decentralization of payment systems, pensions, databases, and new use cases are being invented nearly every day. The concept of national cryptocurrencies and cryptocurrencies as a collaborative tool for providing things like universal basic income has also been floated, but for small, custom, tokens, having access to liquidity is a struggle.

Finance Magnates spoke to Bancor co-founder Galia Benartzi about creating a token system in which custom token networks of any survive have the opportunity to flourish.

Listing Tokens on the Bancor Network

“The full self-service token creation launch and service… is still a couple quarters out,” she explained. “Today, what you can do is create a Smart Token. You can’t actually launch your own ‘TGE’, a Token Generation Event, on the Bancor platform, but you can bring your token that you have done your TGE for, and immediately integrate it into the Bancor network, and give it this ability to be continuously bought and sold for any other token in the network.”

We asked Galia whether or not there’s a vetting process for tokens that want to make their way onto the Bancor network. She explained that “the Bancor protocol is open source, meaning that anyone can utilize this vending machine method that we have invented, and now standardized. Any token can list itself in the Bancor network. That said, if there’s a problematic token, obviously it behooves Bancor to deal with the situation from a publicity standpoint, and from a user-experience standpoint.” 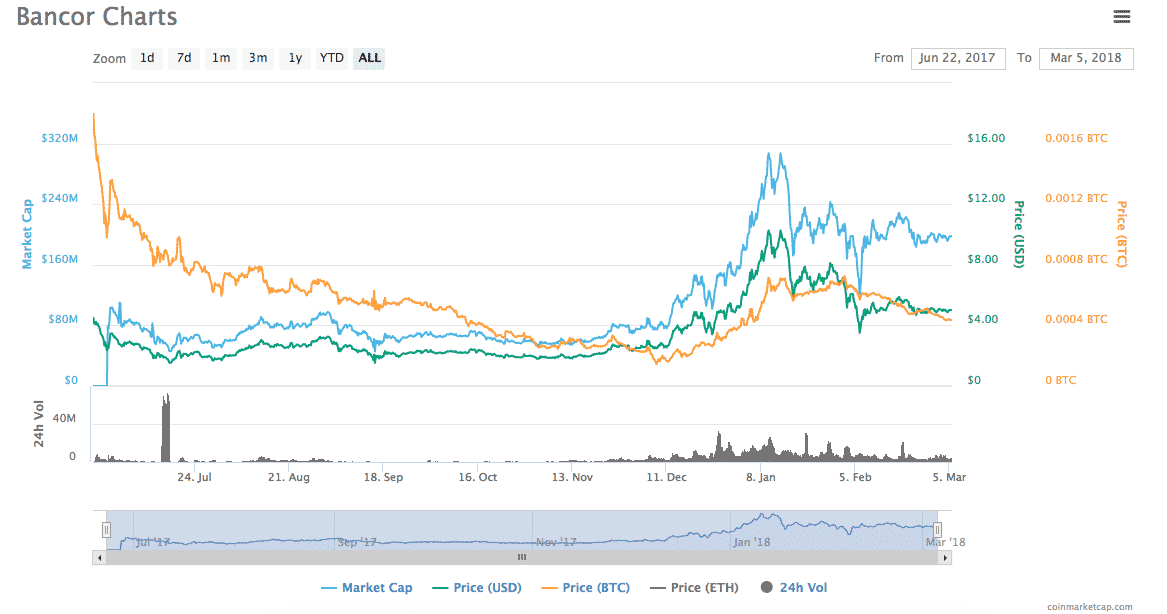 However, she added that Bancor is ultimately just a network. Making a comparison to Youtube, she said that (on Youtube) “you can fight against copyright protection as best you can manually, but generally, a platform will pass the burden of proper usage onto its users.”

In other words, “the terms of service require users of the platform to commit that they’re using it appropriately. Bancor takes a bit more of this approach, which is that is in an open source network. We don’t authenticate–necessarily–the tokens in the network.”

However, she acknowledged that there’s a fine line between freedom-of-use and user protection: “It’s in everyone’s best interests that great tokens will achieve liquidity through this method.”

Galia explained that in addition to being a fee-free network, the key advantage of using Bancor is that “you no longer have to be a very high volume, or a highly traded token in order to have liquidity and allow people to buy and sell your token, as they see fit.”

“The plan for 2018 is very aggressive in terms of tokens we’d like to see live, the volume that we expect to see (both as the industry grows in general and as our platform gains visibility),” said Galia.

In addition to 200,000 users each month, Galia said that forty tokens have already been activated on the Bancor network, and that there are a hundred tokens announced for integration.

“It’s really tremendous progress in a short amount of time, especially considering the newness (not only of the Bancor protocol and the innovation of this method) but also the underlying blockchains–the foundation that we’re building on, Ethereum, is also relatively new and still dealing with its own technological issues in terms of scaling, and like we said at the beginning, everything is moving really fast.”

Avoiding the ‘Paradigm of Isolation’

Galia said that “what’s really interesting about technical developments as great as this-and when I say ‘this’, I mean blockchain, decentralization, and a Bancor liquidity network that allows anyone and everyone to utilize this new access–is that we don’t know how this tool will truly and best be used in the future.”

She explained that the “the big wave of innovation down the road–the kids today will be teaching us the best ways to use tokens a decade from now. Today, we know how to tokenize models that we can already think about, but the real paradigm shift is that these technologies will let us create models we can’t even think about right now.”

“We see the Bancor Protocol as an elegant solution for liquidity that benefits all token holders by offering a completely new paradigm for value exchange based on efficient automated market makers.” -Dan Larimar, CTO of @EOS_io. https://t.co/PZdraF3fSq pic.twitter.com/uAHuH7YPOu

“What Bancor knows is that liquidity between these tokens is essential no matter what they do,” she added. “In order not to find ourselves again in a ‘paradigm of isolation’ where each network or each blockchain or each currency needs to build up its volume from scratch in order to be viable–we know that doesn’t lead to the most efficient collaboration and the most open access.”

“We really work on this liquidity piece, which is allowing every token to be inherently and automatically convertible for every other token, [as well as] to emerge and to focus on their product, their users, and their innovation, and not have everyone working on this volume problem, and on this liquidity problem.”