The Launch Festival is a yearly technology conference organized by noted entrepreneur and angel investor Jason Calacanis. The main draw of the conference, and why it draws over 10,000 attendees, is the focus on company founders and entrepreneurs. This is partially done through the distribution of low-cost and free tickets to founders, while charging premiums to large corporate sponsors. The tradeoff is that the sponsors are able to get in front of a targeted audience for their products, sponsors such as Salesforce, Microsoft and Google.

Taking home the best-launched startup for 2015 was Abra, a mobile-based remittance app. The product is a peer-to-peer (P2P) dollar-denominated payment transfer app focused on the remittance sector. Abra is based on creating a network of human ATM tellers. For a fee, these tellers provide deposits and withdrawals to other users. Abra is similar to mPesa in that users fill up credits and make withdrawals at licensed vendors. The main difference is that Abra is decentralized and anyone can become a teller.

In its presentation, Abra founder Bill Barhydt used an example of a Mexican worker (Bill) in the US who uses the mobile app to send funds to his family in Mexico (Miguel). Bill opens the app and finds the nearest human ATM teller and massages them. Bill then gives the teller $200 and, scanning QR codes of each other, the funds are uploaded to Bill’s mobile app. Bill then sends the $200 to Miguel, who finds a local human ATM in Mexico who he meets in person to transfer the funds and make a withdrawal in dollars or a peso equivalent.

Like recently reviewed Align Commerce, Abra uses bitcoins as the power behind its transfer system. Similarly to Align Commerce, users don’t see bitcoins or view any connection to the blockchain when following payment transactions. In this sense, bitcoins are the technology behind the transfer, similar to credit card transactions and bank wire transfers taking place on connected bank networks without users exposed to the underlying technology of the transfer.

As there are plenty of bitcoin wallets out there, the innovation Abra is bringing to the table is the ability to “fork” the traditional bitcoin wallet and offer it as a dollar-denominated solution. One of the advantages of the system being denominated in dollars is that it removes currency fluctuation involved with bitcoins or other fiat. Also, focusing on the remittance market, Abra’s core users are in locations where exchanging hard cash dollars to local currency is expected to be available. In this regard, as Abra has presented a product that uses bitcoins, but is forked in an offering that is adapted to the greater markets, as well as keeping fees substantially lower than comparable remittance transfer systems. Abra has been able to gain the distinction from the Launch Festival as a “killer app” of bitcoins.

Abra’s success lies in its ability to draw human tellers to the product to establish a scalable network for transfers. In this regard it contrasts centralized systems where a firm like mPesa or WesternUnion can bankroll the opening of transfer locations in various markets to increase its presence and scale its user base. Similarly, machine-based bitcoin ATM operators are able to offer incentives to have their machines placed in many locations, with the expectation that they will recoup costs from fees collected on bitcoin exchanges. As a P2P network, Abra is limited to the size of its user base and geographic locations. Abra is banking on the fact that like Uber and Airbnb have been able to draw non-taxi drivers and hotel operators to provide their time for some extra cash. So to will people become tellers to make a side-business. 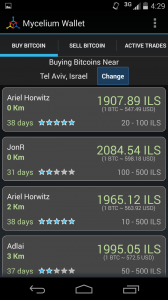 Similar to the LocalBitcoin’s website, Mycellieum provides the ability for users to become dealers to buy and sell bitcoins. App users are then able to enter their location to find local dealers to buy bitcoins. In theory, a user can buy $500 in bitcoins from a local dealer in New York, and then sell them for euros when they arrive in Paris for a vacation.

Unlike Abra, Mycellium users are exposed to foreign exchange risk involved with price fluctuations of bitcoins, as the wallet is denominated in bitcoins. However, the advantage is that Local Trader is based on dealers who quote bitcoins in local currencies.

Where Mycellium really has the edge is with its massive entrenched set of users.  This network makes it easy to find dealers to buy and sell bitcoins to around the globe. But it can be argued that being denominated in bitcoins, Mycellium lacks the scalability that a product like Abra can have since it won’t appeal to mainstream users.

With that in mind, perhaps the real killer app of the future is an app that can merge the benefits of Abra and Mycellium. This app would provide bitcoin wallet features to appeal to the existing bitcoin global user base, but also be able to be customized to only show a single fiat currency. Bitcoin users will be able to receive and sell bitcoins for fiat as dealers, but mainstream users would only view payments in fiat.

Share this article
Tags: startups
Got a news tip? Let Us Know