Exchanges are the beating heart of cryptocurrency trading, and already have a daily trading volume of billions of dollars. For retail crypto traders, these exchanges are the most common (and often the only) marketplace in which they can trade coins in a convenient and safe manner. Following our guidebook for choosing the right exchange, we began reviewing the largest crypto exchanges, starting with Bitfinex. Today we are reviewing Bittrex.

Founded in 2014, Bittrex is a Las Vegas-based cryptocurrency exchange that has become known as the preferred exchange for altcoins–over 250 trading pairs are listed on the exchange.

Although Bittrex’s vetting of the coins that it decides to include on its platform has been largely successful, a few ‘sh*tcoins’ have managed to make their way onto the exchange over the past few years. In November of 2017, Business Insider reported that it had observed “pump-and-dump schemes for the cryptocurrencies UBQ, VCash, Chill Coin, Magi Coin, and Indorse” over the course of several weeks on Bittrex and Yobit.

Bittrex has maintained a rather clean record in terms of hacks–while individual users have reportedly had their tokens stolen from them, the exchange as a whole has not been the victim of any successful hacking attempts.

The exchange received some criticism in December of 2017 when Business Insider reported that some Bittrex users were “left in the dark” as to why they suddenly found themselves unable to withdraw money from the exchange.

Bittrex has publicly stated their commitment to comply with United States regulations. Additionally, Bittrex has created and AML and KYC program that requires users to verify their identities before they can make withdrawals.

At the time of writing, Bittrex was the third-largest cryptocurrency exchange in the world in terms of volume, following the South Korea-based Bithumb exchange. 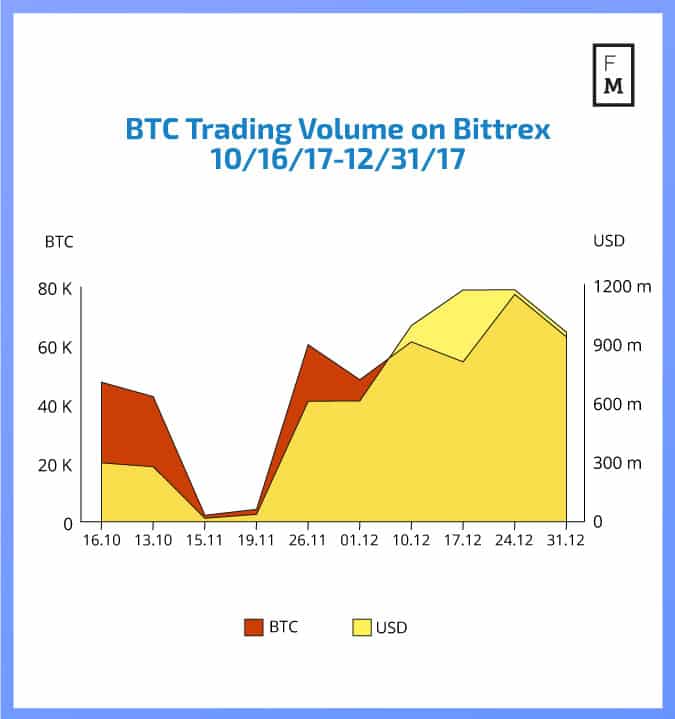 This bubble chart shows all trading pairs which are available on Bittrex, along with their total BTC volume over the last 24 hours. 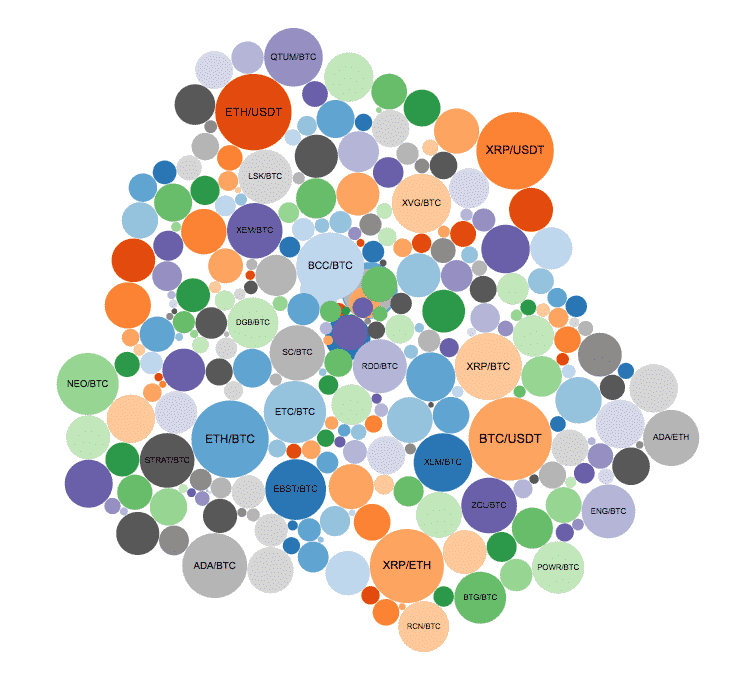 Both charts courtesy of cryptocoincharts.info

Bittrex has gained a reputation for being one of the most–if not the most–secure exchanges in the world.  Its founder and CEO, Bill Shihara, worked as a security engineer for Amazon and Blackberry before founding the exchange.  According to Blockonomi, members of the Bittrex team collectively bring more than 50 years’ experience in cybersecurity and development from firms such as Microsoft and Qualys.

When creating an account on Bittrex, be sure to enable two-factor authentication to keep your account secure.

Bittrex’s support page (support.bittrex.com) allows users to submit help tickets, and they have managed to maintain a solid reputation with response times of generally under one week. Users can also write to Bittrex’s slack channel (bittrex.slack.com).

All trades on Bittrex draw a 0.25% commission, a bit higher than the industry average.

Types of Accounts and Trading Limits

Users with unverified accounts can trade the equivalent of up to one BTC token each day, and cannot withdraw from the exchange. Beyond this, Bittrex supports two kinds of accounts that require varying levels of identity verification.

Basic accounts require users to provide their legal names, addresses, and dates of birth. The data provided is then matched with public records. If a match cannot be found, Bittrex will ask users to proceed to an enhanced verification.  If the match is successful, a basic account can be used to withdraw a maximum of 0.4 BTC per day.

Users with basic accounts can trade up to the equivalent of two BTC tokens per day so long as two-factor identification is enabled.

In addition to the data required for basic accounts, enhanced accounts require users to provide scanned copies of legal photo identification materials as well as a selfie.  The selfie and the photo ID are then heuristically compared to ensure that the faces match.  Users with enhanced accounts can withdraw up to 100 BTC per day.

The Bittrex user-interface is renowned for being easy to use. However, Bittrex does not currently support any trading pairs against fiat currencies, and users must first use another exchange to buy USDT, BTC, or ETH and then transfer it to Bittrex before they can make any trades.

no withdrawals even for old costumers stay away