Exchanges are the beating heart of cryptocurrency trading, and already have a daily trading volume of billions of dollars. For retail crypto traders, these exchanges are the most common (and often the only) marketplace in which they can trade coins in a convenient and safe manner. Following our guidebook for choosing the right exchange, we will start reviewing the largest crypto exchanges, starting from Bitfinex.

Bitfinex, which was founded in 2012, is operated by iFinex Inc., which is located in Hong Kong.  The exchange has more than 60 trading pairs, and is the world’s largest exchange by trading volume.

Bitfinex is an exchange with a wide range of trading capabilities and trading pairs, but its somewhat complicated user interface may make it difficult to use for those new to crypto trading. Bitfinex’s history of large-scale hacks certainly raises concern about the exchange’s security, but the exchange’s response to each of these incidences has managed to keep its reputation afloat (or at least, somewhat afloat).

Bitfinex has dominated the BTC market in terms of trading volume over the last six months, as shown in this graph from bitcoinity.org: 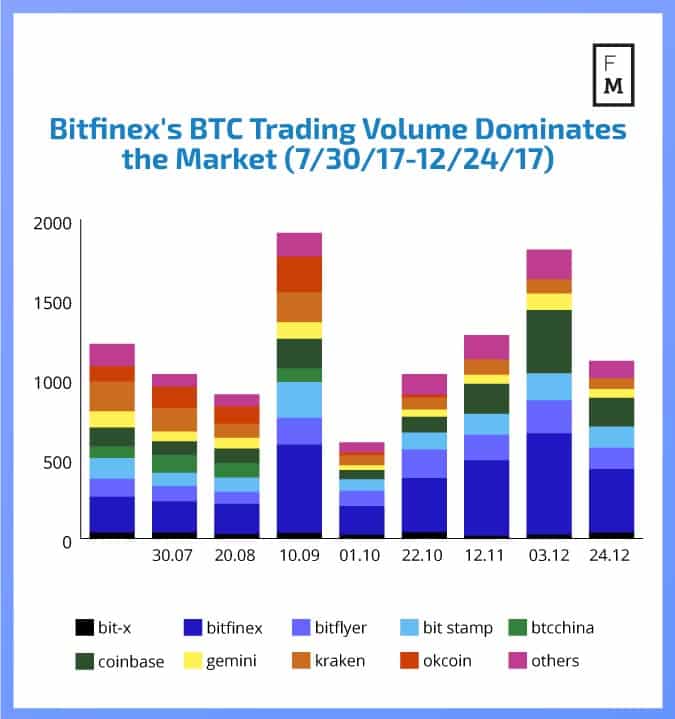 It is possible to sign up for an account on Bitfinex using nothing but an email address–such an account can be used solely for crypto trading. However, identity verification is required for users who wish to deposit or withdraw fiat currency on the exchange. Identity verification is also required to expedite the withdrawal process. There is no buying limit on Bitfinex.

Bitfinex does not offer very much information about how security on the exchange works for “security and proprietary reasons.” However, Bitfinex does say that the vast majority of the cryptocurrency on the platform is stored offline in cold wallets.

According to Bitfinex’s Privacy Policy, the site tracks IP addresses to gather data for internal use. Additionally: “Bitfinex reserves the right to block access for any user accessing the Site via a proxy service intending to conceal originating identity.”

Bitfinex’s support center (bitfinex.com/support) allows users to “open a ticket” to request help from the staff, although some users have reported via Reddit that several weeks passed before they received answers to help tickets they submitted.

Users can also submit questions about deposits and withdrawals, and receive guidance on recovering access to blocked accounts.

Bitfinex’s success has not gone without its fair share of hacks and scandals.

In April 2016, north of 120,000 BTC tokens (worth approximately $72 million at the time) were stolen from the exchange. However, Bitfinex socialized the losses, spreading them evenly across all of its users. Eventually, Bitfinex compensated users for their losses.

Bitfinex suffered more trouble in April of 2017 when the exchange’s bank, Wells Fargo, put a hold on the exchange’s accounts. Although everything went back to normal after the hold was released several weeks later, customers complained of distorted pricing during the freeze. The ordeal resulted in the decision to remove the support of fiat currencies from Bitfinex, although fiat returned to the exchange in late November.

Most recently, $31 million in Tether dollars were stolen from Bitfinex in November of 2017.  The close connection between Bitfinex and the Tether company has raised more than a few eyebrows–the two companies are essentially run by the same two men, Phil Potter and Giancarlo Devasini.

I am officially seeking donations to defend myself against Bitfinex’s frivolous lawsuit, rather than showing their numbers they seek to silence me.

I appreciate all the support you all have given me.