This week, we’re going to take a look at a few markets that are at extreme levels and ripe for retracements. We’re not necessarily looking for a change in the trend, but a normal, healthy retracement designed to alleviate their overbought conditions.

Last week, May Crude Oil futures surged to its highest level since December 9. However, the move ended with a potentially bearish closing price reversal chart on the daily chart, which suggests the selling may be greater than the buying at current price levels.

The primary force behind the rally was an announcement by OPEC of a meeting in Qatar to discuss an output freeze. The main story has been around for several weeks, but this is the first time that a date has been set. Unfortunately, even with a production freeze, the market is not likely to overcome the persistent glut and lack of a production cutback. This likely means the market is setting up for a near-term retracement of at least 50% of the rally from the January 20 bottom at $29.85 to last week’s high at $42.49. This makes $36.17 to $34.68 the primary downside target.

The AUD/USD finished at a nine-month high last week, driven by greater demand for higher yielding assets and commodity-linked currencies. The catalyst behind the rally was the Fed’s decision to slash the number of potential interest rate hikes from four to two.

To currency speculators, this is good news, however, the rapid rise in the Aussie could hurt the growing services and tourism boom in the country, but also threaten the Reserve Bank of Australia’s forecasts. The Aussie is currently at a price level could that could spark some commentary from RBA members in an attempt to talk the market lower.

The weekly chart indicates the AUD/USD is likely close to a top since it is currently trading inside a major retracement zone. The ten week rally is probably making longs a little nervous, giving them a reason to begin looking for excuses to book profits or at least tighten up their stops. Given the prolonged rally in terms of price and time, it is a good time to start watching for signs of a top. The best signal will be a closing price reversal top on the daily or weekly chart. 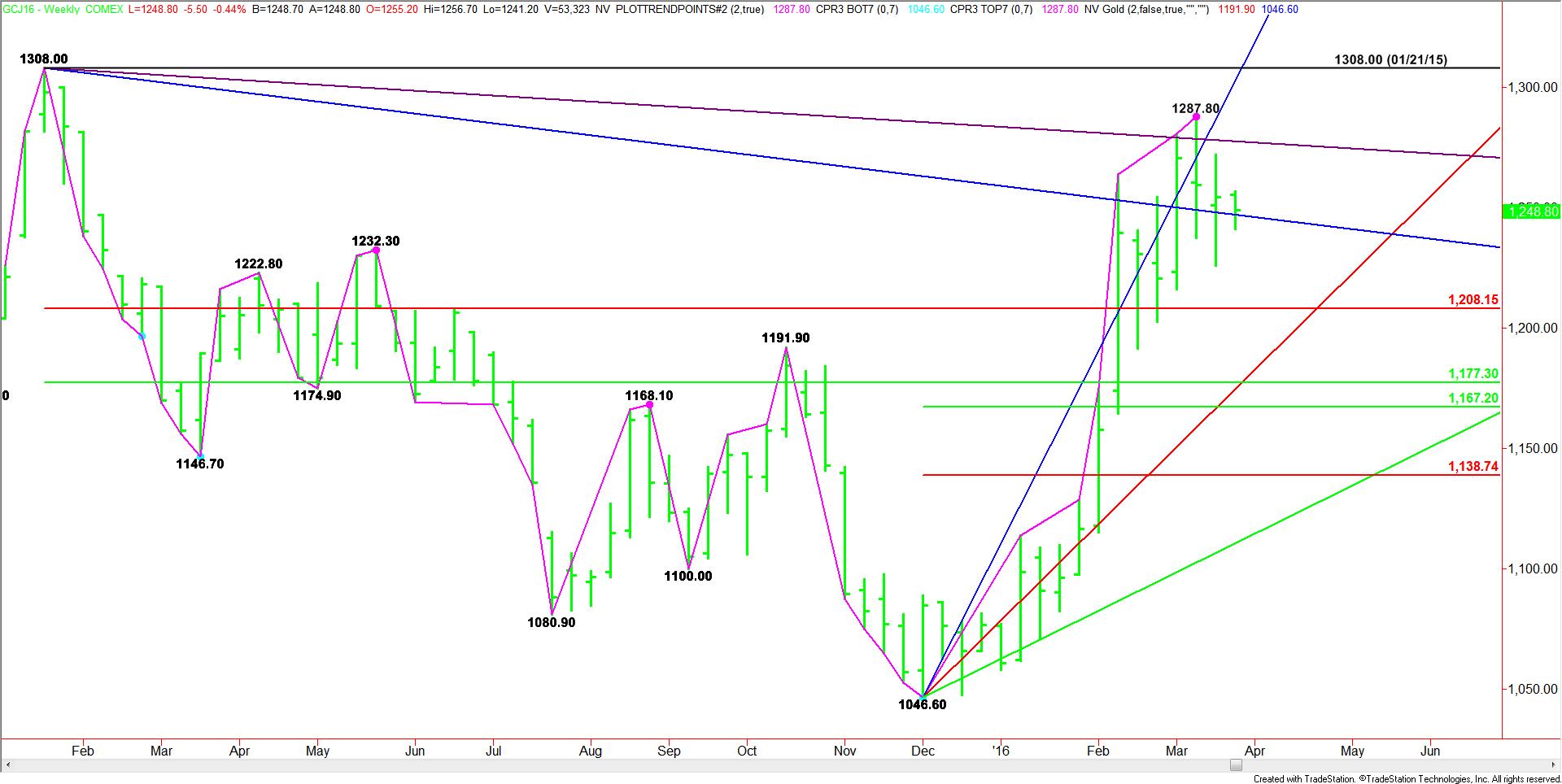 After a prolonged rally in terms of price and time, April Comex Gold produced a potentially bearish closing price reversal top two weeks ago at $1287.80. The chart pattern was confirmed last week, but the weaker dollar failed to attract enough buyers to drive the market through the top to negate the chart pattern.

Despite all the bullish talk, gold has weakened since the stock market bottomed on February 11. The reasons for gold’s big surge in January were legitimate. Stocks were breaking sharply and traders were talking about the possibility of negative interest rates. Investors were also buying on concerns the Fed would refrain from any rate hikes in 2016.

When the markets calmed and investors started to buy stocks, the money stopped flowing into gold. Asset allocators went back to the “book” which said stocks and gold should not move in the same direction over the long-run because investors either want to hold paper (stocks) or hard assets (gold).

In summary, over the near-term we could be looking at a correction in crude oil prices because the main fundamentals remain bearish. There is just too much supply to sustain a rally. Additionally, a production freeze is not the same as a production cut. The AUD/USD is also likely to attract selling pressure because the Reserve Bank of Australia wants it lower. It has the power to cut interest rates, but will try to talk it lower first. Finally, as long as money continues to flow into the stock indices, demand for gold should weaken. Last week, the U.S. dollar plunged, but gold was unable to take out its recent high. In addition, the Fed only cut the number or potential rate hikes in half. It did not eliminate them completely.