The week begins with fresh data on Personal Consumption Expenditures, Personal Spending and Pending Home Sales. The PCE report is important because the Fed uses it as another measure of inflation. It differs from Core CPI in that it only measures goods and services targeted towards and consumed by individuals.

Based on the Fed’s recent monetary policy statement and Fed Chair Janet Yellen’s assessment of the economy, the Fed would like to see an uptick in the PCE. On March 16, the Fed offered a slightly more pessimistic view of the economy and its diminished rate outlook reflected the difficulties facing the central bank as economies elsewhere slowed and the U.S. economy itself struggled to gain traction. While inflation is showing signs of stirring, some in the Fed worry that raising rates too soon may choke off the recovery.

While Fed Chair Janet Yellen may have said “caution is appropriate” at her press conference after the recent rate decision was announced, several Fed members commented last week that the economy may be ready for an April rate hike. The PCE report could settle this discussion. If not then Yellen could do it when she delivers a speech on the economy on Tuesday.

Yellen’s speech could be a market mover because she is going to have to address the hawkish comments from the chorus of Fed members who chimed in about the economy and the path of interest rates last week. If she agrees with the hawkish comments then this could raise credibility issues because less than two weeks ago she was delivering a dovish message.

If she disagrees with their assessment then investors may have a problem with who to believe. This may also be an indication of dissension in the ranks. I don’t think investors want to hear one message from the chairperson and another message from the Fed members.

Last week’s big winner was the U.S. dollar. Its upside momentum could continue early in the week if Yellen is hawkish, or it could reverse course if she is dovish. However, the biggest determinant of its direction will likely be Friday’s U.S. Non-Farm Payrolls report.

The March labor report, due out on April 1, could give investors a sense of whether last month’s strong numbers continued in March. The February report showed job gains of 242,000, above expectations, with growing labor force participation. Friday’s report is expected to show that the economy added 208,000 jobs. The unemployment rate is expected to remain the same at 4.9% and average hourly earnings are expected to recover with a 0.3% gain versus the last reading of -0.1%. 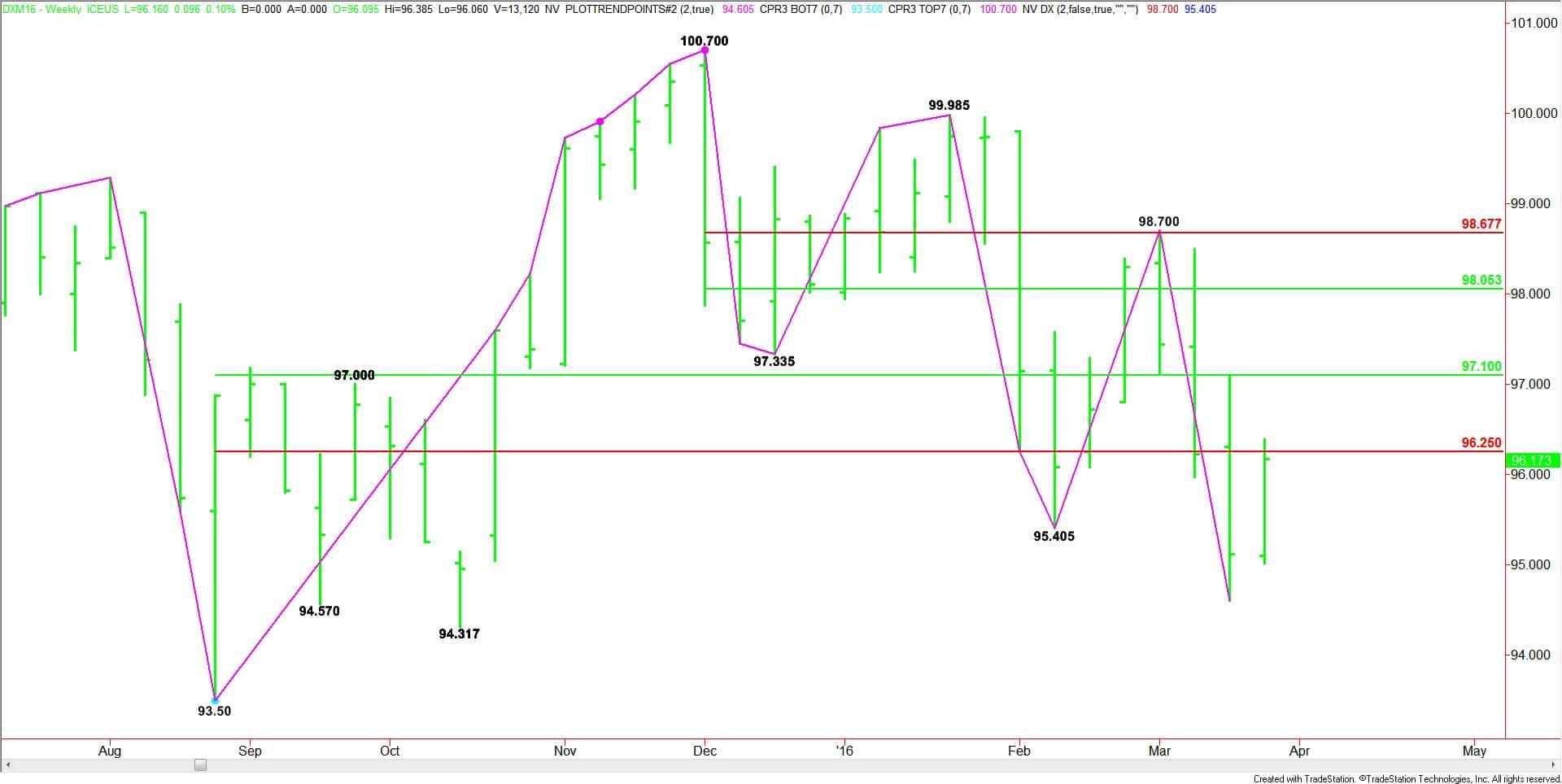 Technically, the June U.S. Dollar Index finished higher for the week. It posted an inside move which means the selling and buying wasn’t strong enough to continue the previous week’s sell-off, or take out the previous week’s high. It also indicates investor indecision and impending volatility.

If Yellen is hawkish and the jobs data is bullish then we could see a fast rally through a major Fibonacci level at 96.25 and last week’s high at 96.385. If there is enough upside momentum then the next target is a major 50% level at 97.10.

If Yellen delivers a dovish message and the jobs data is bearish then we could see a resumption of the selling with a possible acceleration to the downside through last week’s low at 95.605. This would put the U.S. Dollar Index in a position to continue down towards a pair of main bottoms at 94.32 and 93.50.

Brace yourself for an active market this week and don’t be afraid to buy strength and sell weakness because this week is likely to feature volatile price swings since investors will be reacting to news.