As the U.S. seems to be losing the battle against COVID-19 and with the Fed having brought out its “bazooka” when it comes to monetary policy, the USD is likely to depreciate.

But are all the social, monetary and fiscal measures enough to shield the world’s largest economy from a recession?

No. Except for monetary policy — the least effective of the three ways of attacking the problem — the US response has been too little, too late. As a result, I expect the dollar to plunge, and I blame it all on Davy Crockett.

Who is Davy Crockett? Davy Crockett (1786-1836) was an American folk hero, frontiersman, soldier, and politician. He is commonly referred to in popular culture by the epithet “King of the Wild Frontier.”

Many American little boys – myself included, I confess – delighted in wearing a faux-raccoon-skin cap, known as a Davy Crockett cap, or even the whole Davy Crockett costume when we were growing up.

The story I learned in elementary school about Mr Crockett, which sticks with me even today, is that he lived out in the wilderness somewhere by himself.

One day he saw another person – a neighbour. He decided the place was getting crowded and he moved away.

That story is just so unthinkable in many other cultures. In Japan, for example, living outside society was considered a terrible punishment.

Yet even today, the idea of the “rugged individual,” the person who can “stand on his own two feet,” lives on in the American mind. It’s in our DNA.

This is why I think the US is in serious, serious trouble in dealing with COVID-19.

The US has an exaggerated sense of the value of the individual that will make it difficult to enforce the kinds of restrictions necessary to stop the progress of the virus.

In contrast to most Asian countries, US society puts priority on the rights of the individual over the individual’s responsibilities to the broader society.

Even now, so many people think that their rights are inviolable no matter how those rights are imposed on the group as a whole – just look at the opposition to getting rid of even AK-47s in America, much less other guns.

The ultimate example of this is health care: people would literally rather die without health insurance than see their taxes go to help other people pay for health insurance.

The admirable American is one who can “take care of himself” and “lift himself up by his bootstraps.”

Look at the following tweet. I didn’t make this up. This is what I expect the typical response will be from many Americans, aided of course by the Tweeter-in-Chief, who until recently was pushing the line that the virus would “go away” and that the “fake news media” was blowing it out of proportion. Naturally, this lady is a Republican. No surprise then that she also has another tweet saying “The media wants you to freak out. Don’t let them dictate your life.” (Note too that this tweet garnered 13.1k “likes.”)

Added to this the fact that the US is woefully unprepared in terms of the availability of testing kits and hospital beds.

Pardon me if I quote at length from a tweet by Vivek Murthy, the 19th Surgeon-General of the US under President Obama.

Yesterday, I spoke with doctors from one of the nation’s leading academic hospitals located in a state where #COVID19 cases are increasing quickly.

This is what they told me: They’ve been seeing *many* patients with symptoms concerning for COVID19 who need testing. But they are unable to get the *vast majority* of them COVID19 testing.

Their only resource for testing is the state lab. But the state lab is severely limited in capacity and it will take another few weeks for the hospital lab to implement its own test.

So the hospital is saving their test requests for only those who are severely ill – such as those with ARDS (Acute Respiratory Distress Syndrome) who have tested negative for other conditions (like influenza). In other words, they are having to ration tests.

For patients who do get tested, it is taking several days for the test to come back during which time their contacts (including doctors and nurses) have to be quarantined, taking them out of the workforce right when we need them the most.

They also don’t have enough personal protective equipment. The doctors and nurses are having to reuse masks which they know is risky but they have no other choice.

They are worried about running out of gowns and gloves as well. The doctors I spoke with are worried and scared. They know this isn’t the best way to take care of patients. And they are putting their own health at risk in the process.

This is happening at one of the *top hospitals in the United States of America.* And they are not alone. This is the daily struggle for hospitals and clinics across America.

In other words, so far the biggest economy in the world is totally unprepared for this crisis. And when they do get the tests and when they can start diagnosing people and hospitalizing those affected, they will quickly run out of beds.

The US has fewer hospital beds per person than Italy (2.8 vs 3.2), and Italy is already having to triage people – withholding treatment from older patients or those with underlying conditions so that those with a better chance of surviving can be treated. 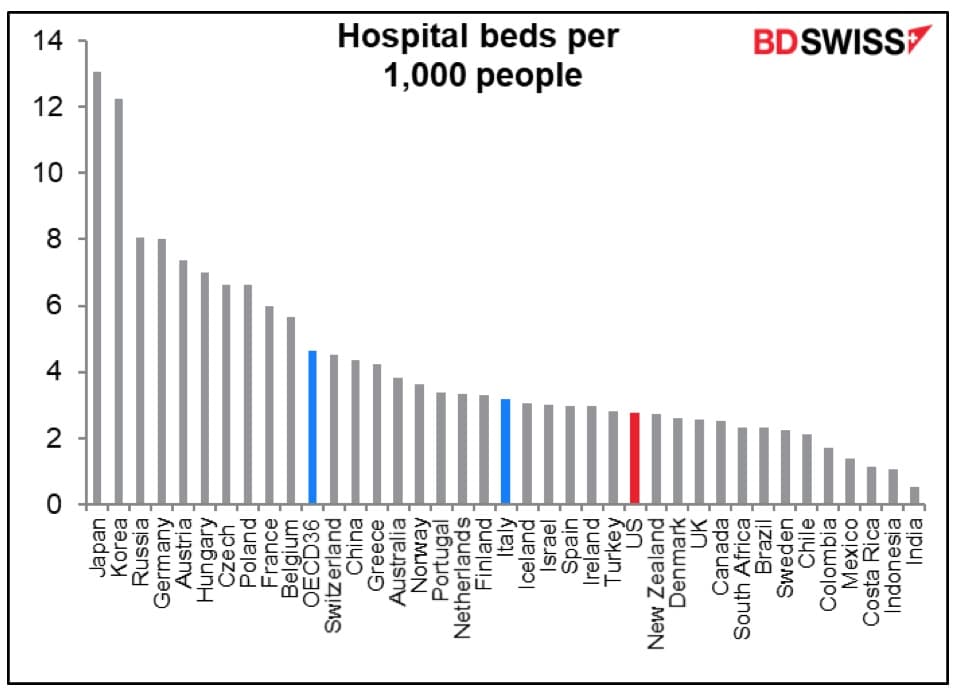 While the recently enacted fiscal package will help somewhat, it won’t solve the major problem, because the Republican Party refused to institute the one measure that would help matters the most, namely sick-pay for lower-paid workers.

Congress did pass a bill extending sick pay, with the result that VP Pence told a press conference Saturday that “If you are sick, stay home. You’re not going to miss a paycheck.”

Meaning 80% of the workforce is not covered by the emergency legislation. Result? The lowest-paid workers, who are often in service-sector jobs dealing directly with the public, will be dragging themselves to work coughing, sneezing and spreading the virus.

By contrast, the Irish government increased the amount the government pays to people who have to stay home and extended the time limit. That’s what’s necessary to avoid a health disaster.

The country has a disaster in the making – in my view potentially the worst of any of the other G10 countries (except maybe the UK).

Probably worse than China, which could quickly impose a draconian shut-down on its people. The EU response hasn’t been great but at least those countries have woken up to the problem and are taking steps.

The US? It’s barely begun taking the necessary steps. That’s because the US has no centralized public health policy and never has.

To make matters worse, Trump fired the people who were in charge of planning for epidemics and eliminated the whole function. As a result, the US response is totally ad hoc and in no way up to dealing with a crisis of these dimensions.

What are the likely economic results of this fiasco?

The one “hope,” as it were, for the dollar is the insatiable demand for the US currency from borrowers. Companies are drawing down their revolving credit lines from banks, which withdraws money from the banking system, at the same time as many oil-producing countries are having to dip into their dollar reserves to fund their day-to-day government operations, a form of “quantitative tightening.”

These two events are helping to push Treasury yields up despite the collapse of the stock markets and are tightening financial conditions – an extremely worrisome development in this situation.

The surge in demand for dollars showed up in a sudden widening of the currency basis swap, the amount that banks are willing to pay to borrow dollars over the theoretical level that they should pay based on interest rate differentials.

The Fed’s actions show that they are clearly much more willing to provide liquidity to the markets than the ECB is, which restores the dollar’s traditional role as the “currency of last resort.”

The dollar may be supported temporarily by this surge in safe-haven demand, although I still think that in a week or two, it will be the health of the populace – and therefore the economy – that’s the deciding factor. 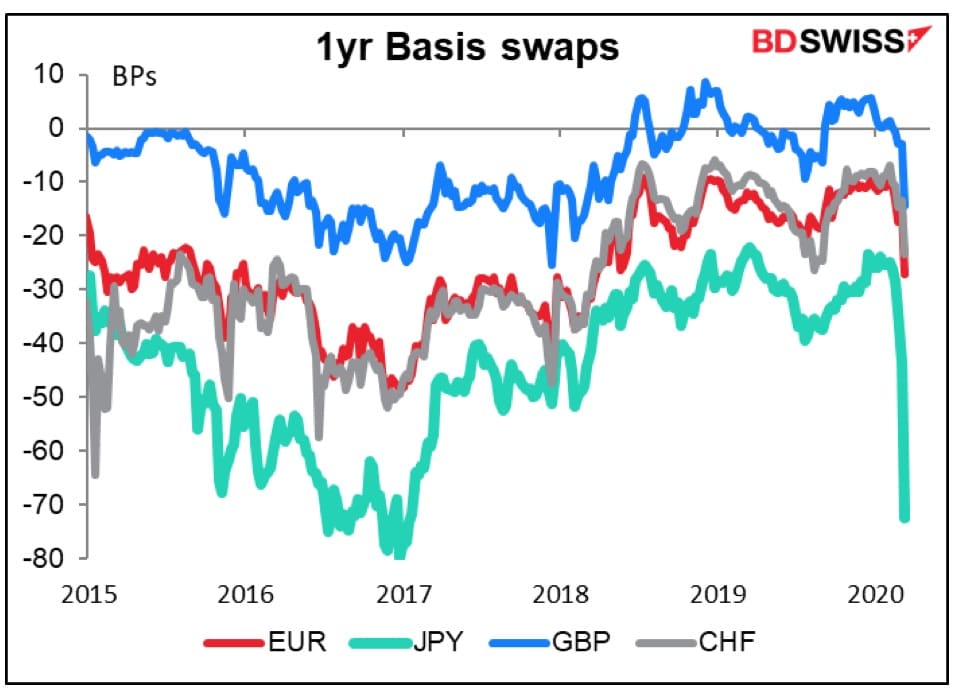 BDSwiss is dedicated throughout the years to offer its clients high-quality research and daily live analysis to keep them informed on the market moves as well as a complete suite of forex educational resources catered to the needs of traders of all levels.

BDSwiss Group is a leading financial group, offering Forex and CFD investment services to more than a million clients worldwide. BDSwiss as a brand was established back in 2012 and has since then been providing top-class products, a wide range of platforms, competitive pricing and fast execution on more than 250 underlying CFD instruments.

BDSwiss complies with a strict regulatory framework and operates its services on a global scale under different entities. With 200+ personnel, BDSwiss Group’s holding company is located in Zug, Switzerland and maintains its operating offices in Berlin, Germany and Limassol, Cyprus.

Disclaimer: The content of this material and/or any information provided by BDSwiss should not in any way be construed, either explicitly or implicitly as investment advice.

look at the statistics!! this is a POLITICAL ploy % fatalities? other “virius stats” this is only a MEDIA pan demic!