Interested in pursuing business opportunities in the blockchain economy? You are not alone! From April to June 2017, Initial Coin Offerings (ICOs), the cryptocurrency equivalents of IPOs, raised more than $327 million, easily surpassing the $295 million generated through traditional funding methods.

As cryptocurrencies increase in popularity and gain acceptance as legal tender, more and more companies are turning to ICOs to raise capital. ICOs or Crowdsales offer a new and disruptive way to secure vital backing, challenging the existing models offered by banks, venture capitalists and crowdfunding.

Breaking into the world of blockchain-powered cryptocurrencies is exciting and rich in potential rewards. However, as with entering any other market, it is not always a straightforward process. Attracting the right investors requires thoughtful preparation, coordination and strategic content localization.

Which Languages Will You Use to Promote Your ICO?

With increasing regulation demanding more documentation, ICOs are now taking on some of the characteristics of IPOs (Initial Public Offerings), but are still a far easier way for start-ups to acquire that crucial initial cash injection. With millions of potential investors and partners scanning the Internet daily, your project needs to compel, inspire and speak directly to these actors.

Once you’ve identified your target audiences, your website, social media presence and key marketing projects must enable them to understand, trust and relate to your vision. Making your digital space, your ICO documentation and other materials available in multiple target languages is a crucial step in this direction.

As mentioned in a previous article, multilingual sites provide an immediate advantage for global users. Content as well as design elements need to resonate with an international audience. 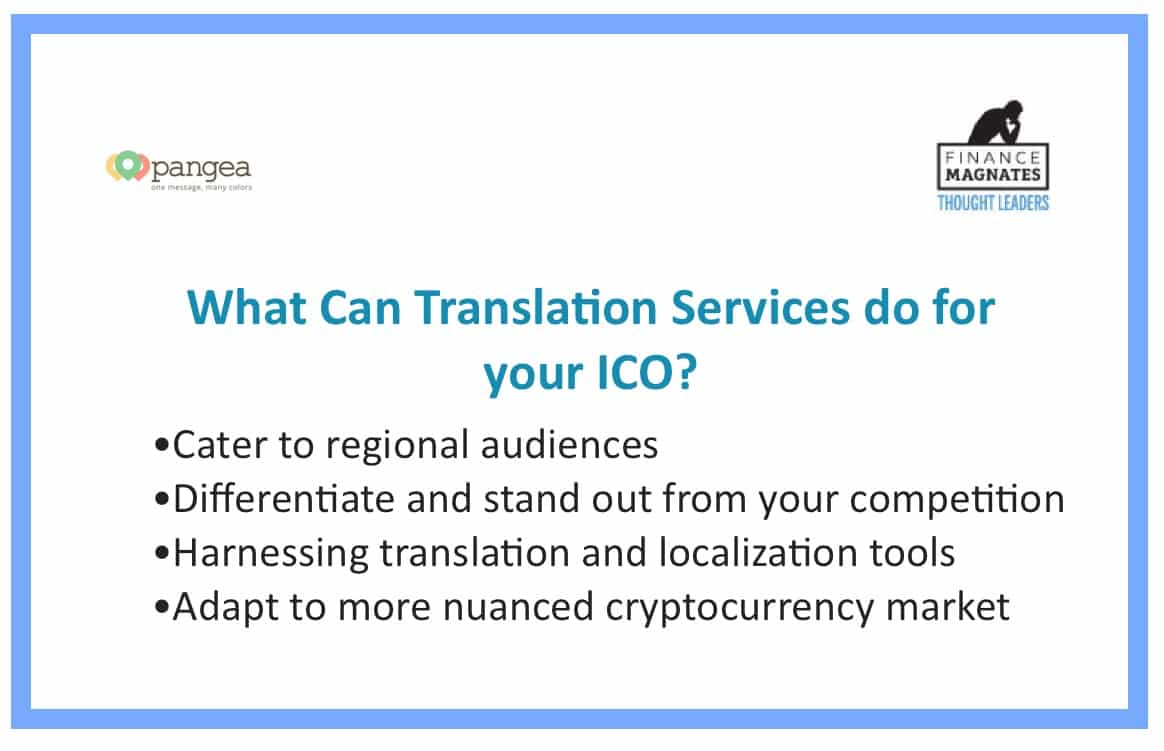 ICOs Banned in China and South Korea: an Opportunity for Other Countries

China and South Korea have recently banned ICOs and some other countries’ monetary authorities are also looking to regulate the cryptocurrency economy. These bans therefore provide an opportunity for the likes of Switzerland, Taiwan, Japan, Singapore and the U.S., which are all working on ways to tackle fraud and money laundering without stifling the innovation economy of which altcoins are the lifeblood.

Japan was an early adopter of Bitcoin as legal tender, and in September 2017, Japan’s Financial Services Agency approved 11 companies as operators of cryptocurrency exchanges, in stark contrast to neighboring countries, which are tightening controls on digital currencies.

With the recent bans from other countries in the region, Japan stands out from its neighbors. As a consequence, we receive many requests for translation from and into Japanese. This shows how interest in cryptocurrencies has not died with the Chinese ban. On the contrary, it has reached new highs.

Taiwan also wants a piece of the action that the altcoin economy affords. Taiwan’s Financial Supervisory Commission chairman, Wellington Koo, has stated that the country is under no obligation to follow China’s ban on ICOs.

Taiwanese financial regulators are aiming to create a friendly ecosystem for the development and adoption of cryptocurrencies and their associated blockchain technology. In preparation for this, the island’s parliament will soon be passing the “Financial Technology Innovation Experimentation Act”.

Standard Chinese, the official language of Taiwan, is therefore still a popular language for your ICO documents, despite China’s ban. It is also an important language in Singapore, a fintech-friendly country, which has recently taken a highly favorable stance towards ICOs.

The renowned financial hub of Switzerland attracts many fintech companies, thanks to the country’s business-friendly regulatory environment, political stability and its rock-solid banking system. According to a 2017 PwC study, four out of the six largest ICOs were hosted in Switzerland.

The Swiss Financial Market Supervisory Authority (FINMA) has not yet announced any regulations on ICOs. It also recognizes the massive potential of blockchain technology and supports the development of blockchain-based solutions. Many new companies now choose to translate their documents into each of Switzerland’s four national languages: German, French, Italian and Romansh.

Estonia is also becoming an increasingly popular destination for companies wanting to raise capital through ICOs. Despite its small size, the Baltic nation is one of the fastest-growing European economies, ranking among the world’s most technologically advanced countries.

It is also the first country to offer “e-Residency” to entrepreneurs who wish to run location-independent companies, offering an easy way to set up and remotely manage an operation from anywhere on the planet.

Estonia’s government is open to ICOs and the Estonian Financial Supervision Authority (FSA) has thus far issued few official statements and even fewer regulations on the subject. The accessibility of the country’s digital infrastructure and its willingness to embrace blockchain technologies are real assets for companies wanting to take their capital raising to the next level.

To leverage the growing interest surrounding the cryptocurrency markets, it’s always a smart move to employ professional language service providers such as Pangea.

This will ensure that your ICO documents and digital content are not only accurately translated, but also appropriately localized, so that your message can be communicated in the most direct and culturally appropriate way to each of your audiences. The agency you work with should therefore understand the precise terminology of your industry, as well as the cultural and linguistic contexts of your target territories.

Investing in making your ICO clear is the most important step when it comes to standing out from the competition. High-quality translation and localization are tools you cannot afford to neglect.