In 2016, Federal banking regulators indicted Wells Fargo on the fraudulent action of its employees who have been opening bank accounts and issuing credit cards for customers without their consent.

Regulators alleged that the bank’s employees might have opened about 1.5 million bank accounts and applied for 565,000 credit cards in the name of customers without their consent.

The Consumer Financial Protection Bureau imposed a $100 million penalty on the bank, Wells Fargo agreed to refund the $2.6 million transaction fees that were charged, and it fired at least 5,300 employees that were involved in the malpractice.

Fast forward to 2019, a Wells Fargo employee has revealed that very little has changed at the 167-year old bank.

According to a Guardian report, Meggan Halvorson, a Wells Fargo private mortgage employee revealed that employees are still being subject to intense performance pressures which fosters an environment of getting results at all costs.

In her words, “It doesn’t feel like they’ve changed much of anything, to be honest.”

As the new year starts, this piece reviews some of the recent scandals in the financial services industries with a view to understanding how financial services firms could fix their corporate culture and avoid culpability in the wrongdoing of their employees.

Banks are in the news for the wrong reasons

In the middle of 2019, five UK banks, including Royal Bank of Scotland, JPMorgan and Barclays were fined more than €1 billion by the European Union for rigging the forex trading market.

The banks reportedly formed two cartels involved in the manipulation of spot forex trading price of 11 currencies that included the British Pound, U.S. Dollar and Euro.

Strangely, JPMorgan hinted that its culpability in the matter was due to the conduct of a former employee and that the bank has taken measures to improve its controls.

Two months ago, a former Deutsche Bank exec Paul Mangoine, who happened to be the head of subprime trading while at the bank was indicted on allegations of mortgage fraud.

The Justice Department revealed that Mr. Magoine will pay $500,000 in civil penalties in settlement of a federal complaint about how Deutsche Bank marketed and sold $1.42 billion worth of mortgage-backed securities in 2007.

Magione’s case is related to the 2017 case in which Deutsche Bank reached a $7.2 billion settlement with the U.S. government in addition to admitting to misleading investors about its mortgage backed securities.

Interestingly, Mr Magione didn’t admit to wrongdoing and his lawyer, Patrick Smith notes that “Mr. Mangione did nothing wrong during his time at Deutsche Bank.

He acted in good faith in performing his customary job functions as a whole-loan trader at Deutsche Bank.

Mr. Mangione was not responsible for Deutsche Bank’s RMBS practices and disclosures to investors, which were at the core of the government’s claims against him.”

Last month, 16 banks including Morgan Stanley, HSBC, and JPMorgan were ordered to pay a settlement of $386.5 million over allegations that they were involved in a price-fixing conspiracy on Fannie Mae and Freddie Mac bonds.

The details of the case revealed that these financial institutions violated federal antitrust regulations by exploiting their dominant market shares to influence price increase, underpaying investors, or overcharging them in GSE bond transactions.

According to Pennsylvania Treasurer Joe Torsella “the allegations in this case were preventable from the start.

If the proper safeguards were in place at these banks, we wouldn’t need to be here knocking the door down on behalf of investors who were harmed by the banks’ conduct.”

Against all odds, financial services are back in the green

In 2018, the financial services industry recorded steep losses with a causality that could be traced to a myriad of factors (see chart below). 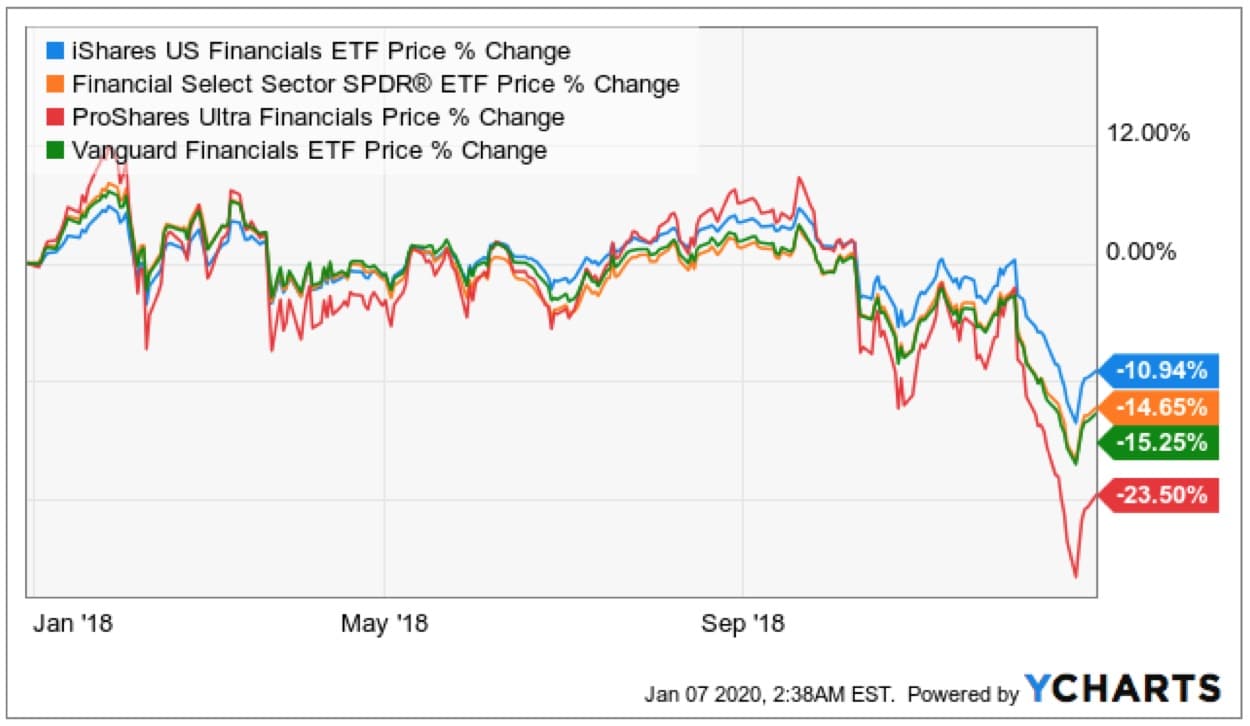 Thankfully, the financial services industry and banks specifically had a decent bull run in 2019 as seen in the chart above.

The ProShares Ultra Financials ETF gained almost 60% in the last one year and other financial services ETFs had more than 25% gains in the same period. 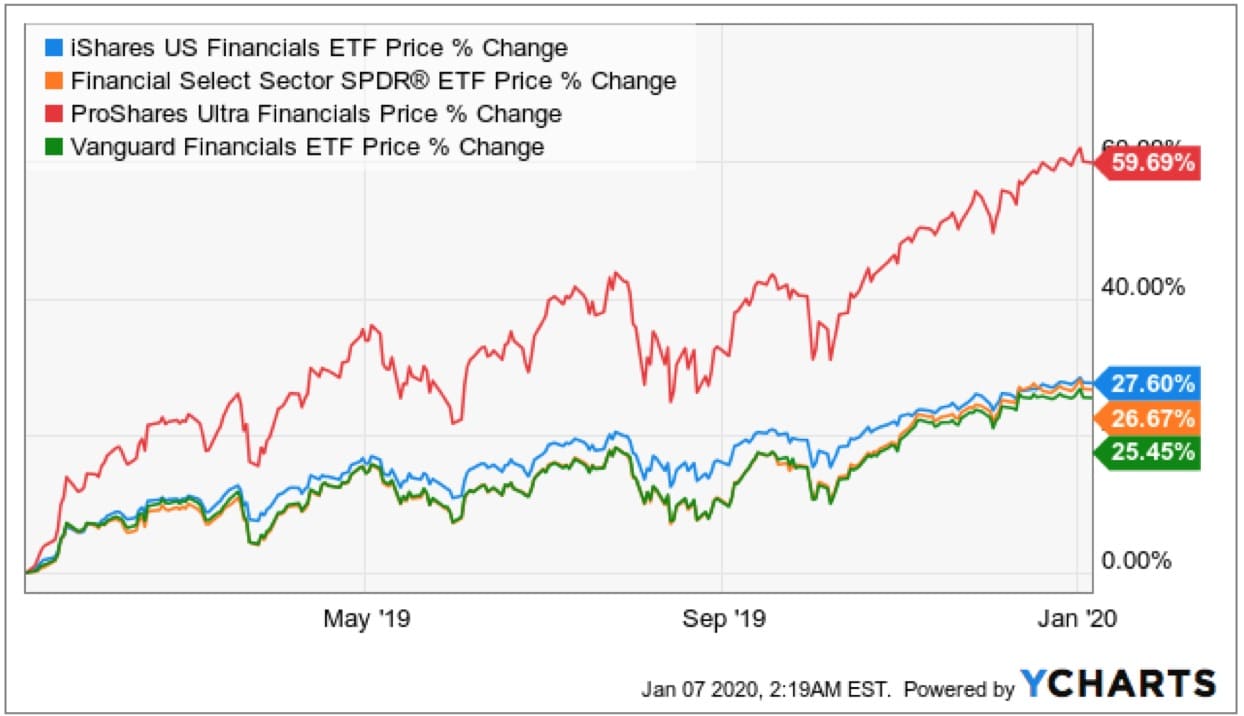 However, the splendid performance doesn’t paint the full picture of what happens in the industry.

Beneath the façade of increase in share prices are allegations, indictments, lawsuits, and settlements of these banks.

As seen in the records of the settlements listed in this post, banks rarely take full responsibility for the alleged crimes.

Rather, their employees (either current or former) are usually blamed for the wrongdoings and the banks then make promises of fixing their systems and processes to avoid a reoccurrence.

Unfortunately, many people now see the act of blaming employees as mere corporate deniability and the prevailing sentiment is that the employees are mere sacrificial scapegoats.

This distrustful sentiment is not limited to the financial services industry.

When the employees of medium and large-scale enterprises get into the news for the wrong reasons, the public is often reluctant to believe that the indicted employees are solely responsible for the wrongdoing.

Providing employees with the right training helps to eliminate ambiguity about systems and processes, it provides clarity on corporate culture, and it makes it easy for enterprises to boost new hire productivity.

Hence, it might be somewhat difficult to justify the expense when it doesn’t have an immediately measurable impact on the top and bottom lines.

However, in the long term, employee training delivers a sustainable solution to reducing the organization’s culpability when employees engage in wrongful actions.

Disclaimer: This is a contributed article and should not be taken as investment advice.

Share this article
Tags: Banks / regulation
Got a news tip? Let Us Know