Heading into 2017, US dollar bulls have much to be joyous about. The Federal Reserve plans to embark on a gradual mission to tighten policy further from current levels. Inflation is at the highest point in years and the slack in the labor force has gradually been reduced.

Moreover, the proposed fiscal stimulus in form of spending and tax cuts are still on the table despite some doubts. All told, the US remains the least dirty shirt of the major advanced economies heading into the new year.

The global backdrop…is more precarious than ever

However, even though there is much cause for optimism, many analysts remain skeptical of the US dollar’s potential. The global backdrop, for one, is more precarious than ever, especially with the looming geopolitical risks across Europe and North America, growing pains of demonetization in India, and decelerating Chinese economic activity.

Despite the numerous challenges that lie ahead, the US and consequently the dollar are uniquely poised to outperform during the upcoming calendar year.

Regardless of heralding the beginning of the end of an extended period of ultra-low rates, the Federal Reserve’s 2015 rate hike did not generate significant optimism regarding a gradual normalization of monetary policy. One of the strongest forms of evidence that markets were not buying it came via the US dollar’s subsequent reaction to the development.

The dollar rally during the end of 2015 resulted in a 5-month decline in the DXY index before reaching support near familiar levels. 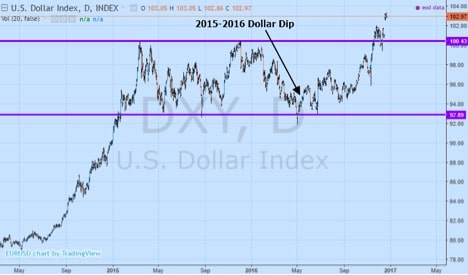 Granted, much of the pessimism was warranted given weak inflation, a volatile presidential race, and tapering growth during the first half of the year. However, given the outlook and recent policy adjustments, 2017 is shaping up to be significantly different than 2016 for the US dollar.

Further divergences in monetary policy will be the predominant drivers of the upside momentum while fiscal policy also plays a role, especially if policymakers can exercise more budgetary discipline in certain areas.

Advanced Economies Hit the Gas as US Brakes

Looking outside the United States for a second, risks for economies considered part of the major currency crosses are considerably to the downside, at least over the medium-term. Nearly every Central Bank across Europe and Asia has signaled that it intends to hold firm and continue printing, or in some cases ease even further. Nobody is really discussing rate hikes before the beginning of 2018 and that is if inflation is miraculously rising.

The European Central Bank has extended its asset purchases while the Bank of England enlarged its quantitative easing by £60 billion. Japan intends to keep targeting yields on bonds while the Swiss National Bank attempts to escape from persistent deflation.

New Zealand and Australia are also fighting stubbornly low inflation. As a result of more expansionary and accommodative policies prevailing across much of the developed world while the Federal Reserve is the sole institution tightening policy amongst the majors is paving a clear path for the dollar to not only book gains but continue climbing.

No matter which way the outlook is sliced and diced, the incoming US administration is backed by a Republican majority in both houses of the legislature. Although many Republicans have expressed reservations regarding Donald Trump’s proposed infrastructure spending and tax cuts, each form of fiscal stimulus would greatly benefit the outlook while helping to tackle structural deficiencies.

Tax reform may not be as popular despite its far reaching impact as Republicans preach greater budgetary discipline. However, for the first year, the Trump Administration’s embrace of many American business titans may pave the way for a more comprehensive plan towards tackling widespread economic disparities.

Fiscal measures are one path towards eliminating widespread government waste and returning to a budget surplus after more than a decade of persistently growing deficits. An expanded focus on the tax reform could help repatriate a significant amount of cash held offshore by US-based multinationals while increasing the competitiveness of the country’s tax code relative to foreign peers.

Additionally, Trump’s plan would reduce income taxes for Americans across the board though this may temporarily increase the deficit, making it an item likely to encounter resistance from other Republicans. Nevertheless, should the process be started, the Dollar is likely to respond positively to the positive fiscal tailwinds.

Despite the significant uncertainty that lies ahead alongside rising political and economic risks, it is not hard to see why the US is set to outperform most advanced economies throughout 2017. Between the fight against low inflation, loose monetary policy measures, and fiscal austerity in most of the developed world, the outlook remains dimmer for the vast majority of the global economy.

the Dollar outperformance is set to last over the medium-term

The one beacon of light that remains during this challenging period is the US economy. The resoundingly positive sentiment that has been a hallmark of the last month might not be permanent, but remains a bright spot during a time when global conditions appear increasingly precarious. As a result, the Dollar outperformance is set to last over the medium-term as the environment for US growth improves further.

A 3.63% annual gain is considered a strong performance? Give me a break. 2016 is measured from January to December. I should hope that with the potential for 3 interest rate hikes the Greenback would at least achieve that amount of minimum growth.