The basis for technical analysis is the idea that trading instruments trend over time directionally and that trends change over time. Periodically, there are corrections to trends, or a pullback before a resumption of the trend, however, when a trend has exhausted itself, it creates a tremendous opportunity to trade and enter a trend with better timing.

The instant that a trend changes direction is considered a reversal, or the beginning of a new trend. Traditionally, it is simply defined as the break of a trend, or trend line. However, in order to effectively trade reversals, it is important to differentiate between reversals and corrections.

The Simple Rules for Evaluating Corrections and Reversals

The 30-60 rule is the basis for everything technical. When evaluating a trend from trough to peak in the case of an uptrend, or peak to trough in the case of a downtrend, that distance vertical to horizontal distance covered by the trend is likely to experience a technical pullback.

The instant that a trend changes direction is considered a reversal or the beginning of a new trend.

Most pullbacks to directional momentum are in the range of 30.00% and 60.00% of the initial move higher or lower. If using the Fibonacci levels, any retracement between the 38.2% and 61.8% would similar be considered a correction before a trend resumption.

By comparison, a reversal involves the breaking of a trend line that connects the valleys or peaks depending on the trend and a new series of highs or lows. Because the line between a correction and a reversal is so slim at times, it is important to keep these basic rules in mind, such as a correction always happening faster than the initial move higher.

Furthermore, a major shift in price action is usually strongly signaled by the behavior of volume and volatility. These indicators, especially during periods of low volume and low volatility together, suggest that a change in direction is imminent. Additionally, periods of consolidation can also be viewed as a precursor to reversals.

Before trading a reversal, the first responsibility of a trader is to define and understand the trend. Once determined if the instrument is trending higher or lower, a trend line must be fitted to either the lows or the highs depending on the type of trend.

It is generally best to avoid horizontal trends or instruments that are not trending because in the case of the former, a range tends to lead to a breakout, not necessarily a reversal. In the case of no trend, the inability to fit a trend line makes it impossible to identify a reversal. 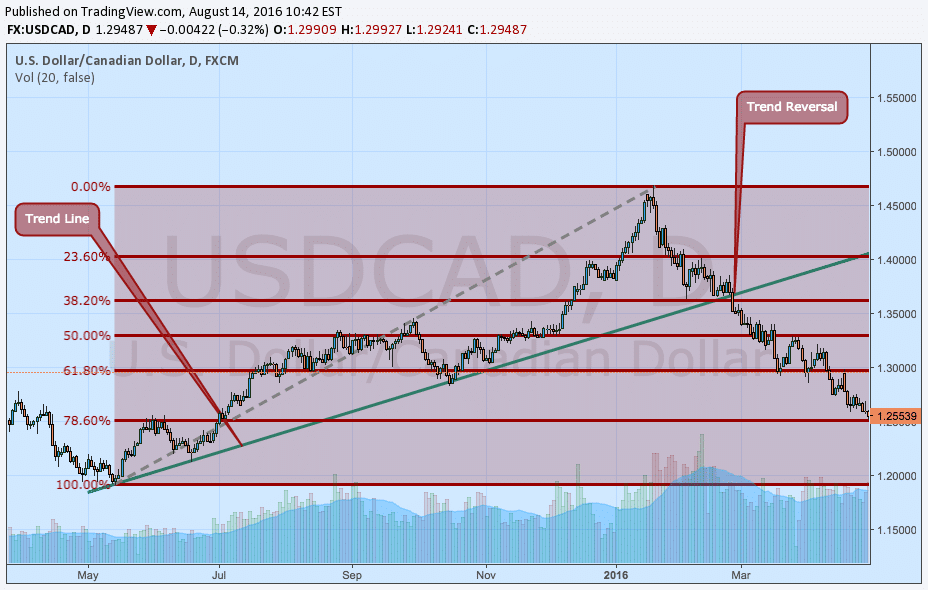 Reversals are almost exclusively preceded by falling volumes and momentum, not rising volume and momentum. The idea generally for trading reversals is establishing a position, either bearish or bullish, once the trend line is broken. At that point, setting risk and reward sets in. 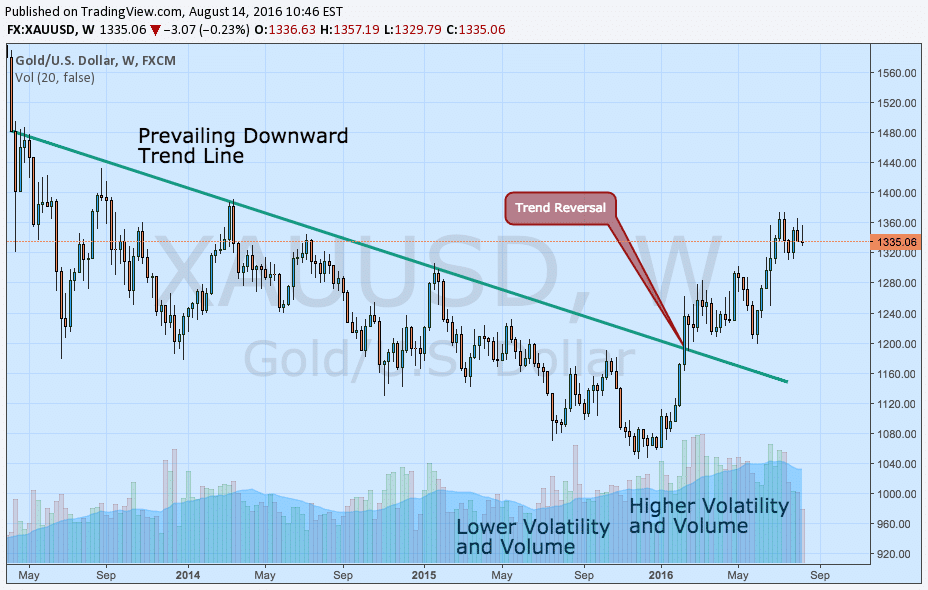 Knowing the depth of a correction or full blown trend reversal helps to set the reward potential of a trade and also the risk. When it comes to exiting in the case of a trade that fails to hit the profit target, the trend line is a key component of the exit strategy.

Once a trend line has been established, it is important to understand the strength of the trend.

In the case of a broken uptrend, the trend line should be used as a tool for the exit strategy, with any candlestick close above the upward trend line viewed as an opportunity to exit. The reverse is also true when applied to a downward trend.

Spotting a reversal earlier is a great way to take advantage of a changing trend instead of using a trend following strategy that works until it doesn’t, all trends eventually change, so instead of getting involved in a trend following trade and finding yourself buying tops and selling price bottoms, waiting for a reversal can afford an easier opportunity to get involved in a trade earlier.

However, just like a strong trend is accompanied by higher momentum, volumes, and volatility, a strong reversal signal comes from the same indicators.

Share this article
Tags: trading / trend
Got a news tip? Let Us Know