One of Thomson Reuters most widely used trade routing networks – Autex, which is used by buy-side brokerages for routing orders to executing (sell-side) firms, just got iterated with the launch of an Autex Client Portal, and the moving of its global FIX order routing system – Autex Trade Route – into the company’s Elektron network.

The Thomson Reuters’ Elektron network is the company’s next generation network that includes a suite of trading and data product solutions for enterprises connecting to capital markets, and also powers the firm’s flagship Eikon platform -which includes Foreign Exchange capabilities, and aims to replace legacy systems as the firm continues streamlining its businesses.

According to the official press release today, the new Autex Client Portal enables firms to monitor operational risk by overseeing multiple aspects of a trade in real-time, ranging from a firm’s own connection status to counterparty connection status, real-time service alerts, capacity utilization, order flow metrics, and contact lists, according to the press release.

Over 750 buy-side firms and 700 executing brokers and venues use the Autex Trade Route service, according to the official press release, and the respective lists of executing brokers and buy-side firms were published by Thomson Reuters including several retail FX firms and many institutional FX firms as well (although it’s mostly equities’ related entities) on both sides (executing and order routing).

Used mainly for routing order for exchange traded equities, securities, options and bonds, the Autex network has seen an increase in other asset classes, such as FX transacted through its network between order originators and the subsequent destinations that its respective trades are routed to for execution. This is done by connecting firms and integrating with 3rd party vendors that provide Execution Management Systems (EMSs) and Order Management Systems (OMSs).

Orders routed through Autex include Foreign Exchange, among other OTC markets and derivatives, as the convergence of asset classes into multi-dealing platforms has resulted into multi-asset order flow through OMSs and EMSs through the Autex Trade Route network (e.g. OMSs/EMSs such as Bloomberg EMSX, Sungard GL, Fidessa, etc.).

The launch of the Autex Client Portal, mentioned in the announcement today, is described as the first tool of its kind among FIX network providers,  and aims to give system administrators at financial services firms a real-time, interactive view of network status and trading activity both within the firm and across counterparty connections, enabling greater operational risk management, as per the press release.

Dealers on both the buy-side and sell-side often connect electronically through protocols such as FIX, and often use 3rd party solutions (EMS and OMS solutions) where instant access can be gained from one single FIX integration (into the 3rd party solution) rather than integrating into each destination in the network individually (thus saving IT time and other related costs or time-related missed opportunities).

When two firms speak FIX, using a 3rd party solution where both are already connected is certainly faster to get trading underway than starting a direct FIX API integration as described above.

Depending on a firm’s size and needs, brokerages can have more than one way to route a trade, such as using a direct FIX connection through the brokers own FIX engine , or via one or more 3rd party solutions as described above. Cost factors are considered here as the firm’s flows must justify either expected business facilitated though a 3rd party OMS, or in response to existing clients’ needs (or both).

When two parties on a network wish to connect to one another for electronic order routing, the provisioning of trading enablement is normally quick and straightforward once terms have been agreed upon via an execution agreement, and clearing related standard settlement instructions (SSI) have been confirmed.

This way the executing broker can receive the order and execute it in real-time and then send the trade off for settlement based on the standing instructions. A process that could takes weeks to integrate via FIX API, could be provisioned within days, if  both sides have already connected via FIX into the 3rd party OMS solution (and are in the same network such as in the above case – Autex). 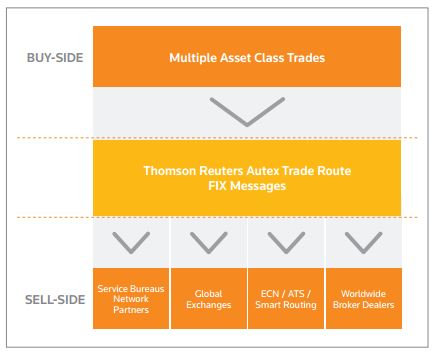 An operator of a diverse set of business segments, Thomson Reuters had previously announced and made changes relating to streamlining its business, including reducing redundancies and phasing out legacy platforms after shifting solutions into consolidated offerings (and staff reductions), as a means to become more efficient for both its customers and internal operation.

Commenting in the official press release today, Rob Hegarty, managing director and global head of equities said, “These latest enhancements to Autex Trade Route empower our buy and sell-side customers with the tools and technology they need to stay ahead in today’s constantly evolving trading world.”

Mr. Hegarty further added in the press release, “The migration of Autex Trade Route onto the Elektron network allows our customers to benefit from reduced latency and improved resiliency. In addition, the new Autex Client Portal provides our customers with a level of insight into operational risk that is unmatched in the industry today.”

The announcement described how Thomson Reuters’ Autex Trade Route delivers order flow of two billion shares per day in equities, options and futures, as well as FX and fixed income.

The company describes Autex as being the world’s premier order indication and advertised trade service, and as providing market professionals access to the largest and broadest pool of global trading liquidity. It receives streaming indications of interest (IoI) from trading partners across the globe, and processes more than five million messages per day, as per the press release.

As Thomson Reuters aims to streamline its efforts across multiple business segments into consolidated or compact offerings, such as the suite of products in Elektron – including the newly added Autex. These can be deployed at a customer location or delivered as a fully managed service from any one of Thomson Reuters co-location and proximity hosting sites around the globe, the expectation of more efficient operations is fueling the changes as improvements are made.

A product fact sheet on the Autex product page is labeled Elektron Trade Route, which could indicate the Autex name may be rebranded under Elektron (unless was a typo) following the transition in today’s announcement, and now that Autex Trade Route is part of the Elektron suite of product solutions.