One of the prominent providers of execution services on the US Equities markets and operator of FX subsidiary KCG Hotspot, reports positive third quarter financial results on an operating basis, according to figures published on its corporate website, in which a record 14% of consolidated market share of US equity volumes was achieved during Q3 2013 by the company. KCG also announced the appointment of a new non-executive Chairman, Mr. Charles Haldeman, to its board of directors effective November 1,2013.

Although the company mainly specializes in market making, agency execution and trading venues (operation and routing) in US equities and other exchange-traded markets globally, its Forex segment under the KCG Hotspot subsidiary, which operates an ECN for the institutional FX market place, accounted for approximately 12.8% of institutional spot FX volume among reporting venues as per the press release.


The Global Execution Services segment is comprised of agency execution services and trading venues. During the third quarter, the Global Execution Services segment generated total revenues of $91.4 million and a pre-tax loss of $16.4 million. Expenses during the quarter included approximately $15.1 million in severance from reductions in head count. Excluding the severance expense, the non-GAAP pre-tax loss from continuing operations was $1.2 million, according to the corporate statement.

Financial results for the segment in the third quarter however, were hampered by the reorganization of the ETF team as well as a seasonal, market-wide decline in institutional U.S. equity volume. Related to the post-merger integration, the Global Execution Services’ team combined all capabilities in algorithmic and EMS execution, as well as the sales function of KCG ATS’ Knight Match and GETMatched.

KCG’s head count on September 30, 2013 was 1,304 full-time employees, excluding employees affected by the announced sale of Urban Financial Group. KCG, through its subsidiary operates Knight Capital Americas LLC, a Futures Commission Merchant which is also regulated as a registered Forex Dealer Member with the NFA and CFTC, and was noted as having the highest ratio of excess regulatory capital when compared to other RFEDs in August by Forex Magnates in a recent post.

In August 2013, KCG modified the reporting to remove certain equity stats of GETCO Holding Company, LLC to align with historical reporting practices. Trade volumes and statistics are for KCG Holdings, Inc for Q3 2013. For all other periods presented, trade volumes and statistics are the combination of Knight Capital Group, Inc. and GETCO Holding Company, LLC, as per the Q3 2013 report. 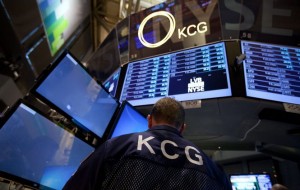 Regarding the third quarter results, Daniel Coleman, Chief Executive Officer of KCG, said in the release, “At the start of the third quarter, integration work shifted from planning to execution. KCG’s core capabilities encompass market making and trading through agency execution and venues. A priority of the integration is to share new technologies, intellectual capital and infrastructure costs to create advantages and efficiencies that we believe KCG’s competitors will have difficulty matching. During the quarter, we made significant progress while delivering positive financial results on an operating basis. I’m pleased with the individual and collective initiative across the new firm.”

In a parallel press release from the company today, KCG announced the appointment of Charles (“Ed”) Haldeman as non-executive Chairman of the Board effective November 1, 2013, as stated above. Previously, Mr. Haldeman was CEO of the Federal Home Loan Mortgage Corporation (Freddie Mac), a position that he was appointed to in June 2009, almost a year after Freddie Mac was placed into conservatorship following the subprime mortgage crisis and was instrumental in stabilizing the company in the wake of the financial crisis of 2008, according to the release.

Mr. Haldeman’s experience isn’t limited to government-backed mortgages, in 2002 he joined Putnam Investments, a Boston-based mutual fund company, where he went on to become President, CEO and Chairman. He is also currently a Non-Executive Director of McGraw Hill Financial, Inc.

Commenting in the press release regarding the new appointment, Mr. Coleman said, “Ed is a well-recognized leader in the financial services industry. For the past four decades, he has consistently stood for integrity, client service and bringing the best talent and technology to meet clients’ needs,” and concluded, “This is exactly our focus at KCG, and we are delighted to welcome him to the Board.”

Regarding his new position as non-executive Chairman, Mr. Haldeman added to the announcement, “As one of the world’s leading market makers, KCG provides its customers with extraordinary client service and delivers the liquidity that is critical to an efficient and functioning market. I welcome the opportunity to collaborate with the exceptionally talented individuals at KCG to continue to build upon its successes.”

For the third quarter in 2013, the net income reported of $98.9 million included a one-time deferred tax benefit of $103.5 million related to a change in tax status at the merger close. A pre-tax loss from continuing operations of $8.1 million includes $25.6 million in severance and merger-related expenses according the the release. A copy of the full Q3 release is available on the KCG corporate website.