Of the financial centers in the world that trade in the trillions of dollars’ worth of daily volumes, the largest of these with respect to commodities is the Chicago Mercantile Exchange (CME Group). During 2012, the CME Group had roughly $1 quadrillion (or a thousand trillion) in notional value traded across 3 billion contracts.

From these significant volumes across the company’s businesses, FX is playing a rising role for the company and its customers who trade the asset classes on a regulated contract market, through the CME.

The increase in volumes has led the CME’s FX to become one of the major public venues, as trading rivals of Thomson Reuters and EBS. Within their line of FX products, options are seeing the largest growth taking place in 2013.

According to the most recent Triennial survey of Central Banks conducted by the Bank for International Settlements (BIS) in April 2013, the trading of FX options increased the most, by more than 60%, more than other Foreign Exchange instruments’ segments including Spot, FX Swaps, Currency Swaps and Forwards. The combined volumes of Outright Forwards and OTC Options accounted for almost a quarter of global FX turnover growth between 2010 and 2013.

Learning what is driving FX options in 2013, and whether this trend will continue, Forex Magnates contacted Craig LeVeille, Executive Director FX Products at CME Group, who explained “There were several major risk events this year that drove demand for FX options, including ‘Abenomics’ and the yen depreciation, the risk-off in emerging markets in June, the ongoing taper-on/taper off theme, and more recently the US government shutdown. Investors tend to use options as a safer tool to hedge exposures during periods when risks are very difficult to quantify. ”

Mr. LeVeille concluded regarding the scope of the growth in the segement saying, “We have also seen a surge in the trading of our weekly option contracts as customers look for more tailored positioning to capture short term events like the recently delayed release in the NFP. This increase has occurred across client segments, including managed accounts and self-driven traders.”

Also providing comment, Paul Hodgson, Product Manager FX, Money Markets and FX Options at SunGard’s Front Arena, explained to Forex Magnates earlier this year that, “A significant growth of FX options has been in the area of structured products. The high level of demand for ‘yield enhanced’ and ‘performance’ products (such as dual currency deposits, wedding cakes, etc.) which deliver attractive returns through the use of FX options has generated a massive increase in use in the less obvious parts of the market.”

(A dual currency deposit (DCD), also known as Dual Currency Instrument, is a derivative instrument which combines a money market deposit with a currency option to provide a higher yield than that available for a standard deposit. There is a higher risk than with the latter – the depositor can receive fewer funds than originally deposited and in a different currency. So one could do a USD/JPY DCD depositing USD and receive JPY.)

FX Options at the CME

Forex Magnates recently covered the growth in the company’s options business during its latest reported month where volumes in other FX instruments fell, but trading in FX Options grew by almost 91% year-over-year (YoY) during October.  The activity was consistent with traction building in this segment over the last year, as noted above for both CME and according to industry data collected by the BIS report.

From the 31 contracts offered on 21 currencies, Year-to-Date (YTD) trading is up 45% in the FX Options’ segment according to the CME’s Q3 update. The percentage increases during the third quarter and YoY were also highlighted and attributed to increasing electronic participation that contributed towards strong options growth, even as trading volumes plummeted in other segments. The group recently received provisional approval from the CFTC as a Swap Execution Facility (SEF), and was one of the last companies to submit its application following the swarm of applicants that rushed in recent months to get provisional approval.

A diagram below highlights the put/call breakdown of major currency options flow at CME during Q3: 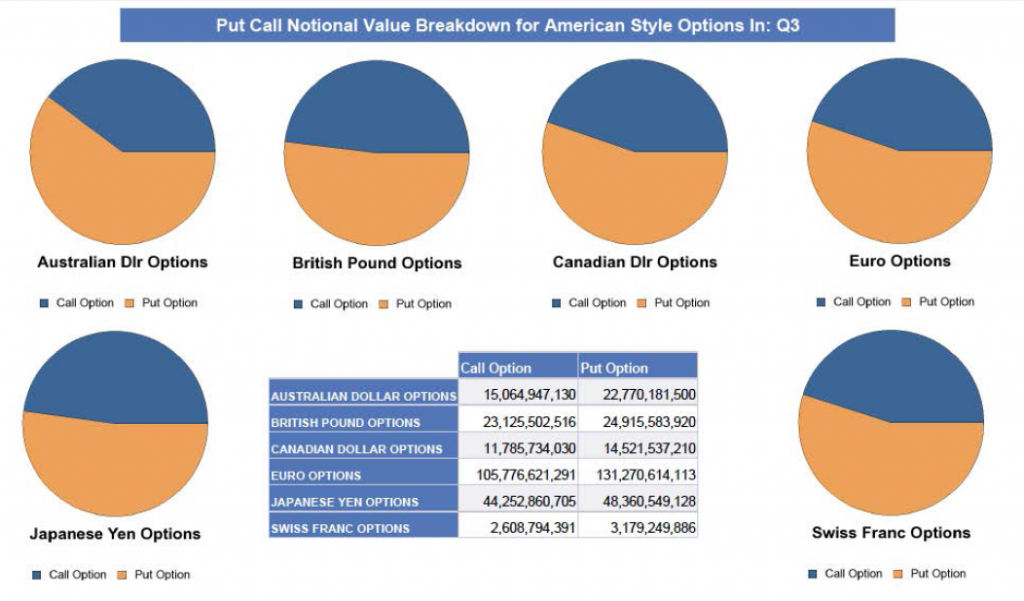 In late October 2013, CME had a single day where $14.1 billion in FX Options (93,063 lots) were traded and represented the most since July 5, 2013, for the group. This included a surge of interest in weekly options where EUR/USD tends to dominate the percentage of options traded with weekly expiry (not monthly) .

The CME’s latest announcement on options was today, as the firm launched options on CME’s yen-denominated Nikkei Stock Average futures.

According to the company’s press release today, CME Group will reference the Osaka Security Exchange’s (OSE) Nikkei 225 (Yen) Futures contract in connection with these options contracts.  These options contracts are listed with, and subject to, the rules and regulations of CME, and will be available for trading on CME Globex from January 13, 2014, pending CFTC review.

As more brokerages expand options products as well as educating investors and traders on the numerous and often complex trading strategies that options provide, volumes can be expected to continue to grow, especially with regards to Foreign Exchange as a means of diversifying a forex portfolio or trading strategy.

The development of new options products reiterates the demand and/or expected growth from this instrument class as a means of trading, whether for speculative or hedging purposes as investors look for diverse ways to capture price movements.

Share this article
Tags: Bis / cme
Got a news tip? Let Us Know