Foreign exchange settlement risk mitigation service provider CLS, operated by CLS Group Holdings AG, has released its 2013 annual report, according to a publication on its corporate website dated May 13, 2014, showing revenues rising to GBP 179 million and up 9% year-over-year.

The data was released following the Annual General Meeting and Shareholder Briefing that CLS held at the end of last month, and included its consolidated accounts and activity for 2013, which showed that on average CLS settled $5 Trillion worth of FX transactions daily, from among its 63 settlement members and across 17 different currencies, including its most recent involving the Canadian dollar – in the USD/CAD pair – which was launched in 2013.

Financial Highlights from the Report Included: 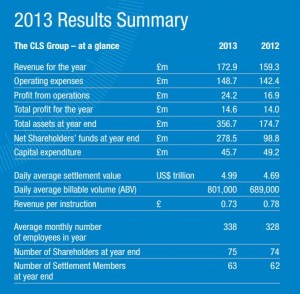 The company said it has improved its financial position, including the raise of capital that Forex Magnates wrote about in Q4, which CLS said was a “key element” of its 2013 success, and added that it had a strong year for its business performance, with foreign exchange average daily volumes reaching peak levels, higher than at any point during its 11-year history. This occurred as FX volumes had broadly peaked to all-time highs in April 2013, according to the latest triennial survey conducted by the Bank for International Settlements (BIS).

Outgoing CLS Chairman Gerard Hartsink, soon to be succeeded by CLS’ Ken Harvey, said in a letter to shareholders, included in the 2013 annual report, “Foreign exchange is a remarkable and unique market. It remains the most global and liquid asset class, with its efficiency as a market derived from its core role in facilitating cross-border trade and investment.

CLS continues to perform a central role at the very heart of this eco-system, providing an orderly and effective risk mitigation service to FX market participants across the globe. It also remains an example of how financial market participants have cooperated to mitigate settlement risk in the FX market. This market is evolving constantly, with new participants and currencies coming to the fore, yet there remains one constant: Settlement risk remains the most significant risk faced by the industry and CLS continues to mitigate that risk, delivering stability and security.”

The news follows just a few days after Forex Magnates covered CLS’s March volumes – which showed that the group wrapped up a positive quarter amid challenging market conditions.